After years of advocating for a fair share on resource royalties for Albertans, the adoption of the royalty review recommendations came as a disappointment to many unions and progressive groups in Alberta. Labour experts say the results serve as a warning to be vocal and mobilized on progressive issues. 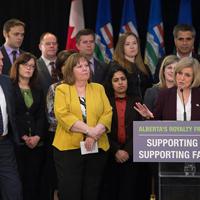 That tension was witnessed in the comments by Alberta Federation of Labour president Gil McGowan, who told the Calgary Sun the government had made a profound political mistake and the review had become captured by industry.

"We were disappointed," McGowan says in a more taciturn response this week.

Despite a 2015 election campaign that slammed low royalty rates last year, the NDP government accepted a review that found Albertans are receiving a fair share based on the current low oil price.

Critics say the new royalty system lacks a mechanism to increase royalties as oil prices increase. The review also lowers a current 30 per cent royalty on conventional gas to five per cent and incentivizes the production of new oil wells.

For McGowan, the major disappointment in the review is the expansion of the oilsands royalty system to the rest of the oil and gas sector, including fracking operations.

McGowan admits the need to mitigate the low price of oil understandably led to a maintenance of the royalty system, but to expand that system does not create a fair share for all Albertans.

"This is a cautionary tale," says McGowan. "We can't simply turn our backs and expect the government to only do progressive things."

But it's a trap the AFL may have fallen into. McGowan says despite his organization's participation in all the roundtables and meetings with members of the royalty panel, he realized too late the process had turned in favour of industry.

"We didn't write our submission until it became clear the process had gone off the rails," says McGowan, adding that he sent the AFL's brief directly to the premier's office because the group had lost faith in the panel's process. "We realized we had to put our concerns on paper in a last ditch hope that we could stop the royalty panel from having its way."*

But Foster warns it's important to not overstate the fracture this policy decision may have caused, saying that unions and labour groups have been working well with government to create beneficial policy.

And despite his disappointment with the results of the royalty review, McGowan agrees that this is just one consultation process of many. And that several of the others have turned out results he would agree with.

"The government has launched dozens of consultations on a number of issues that have been open, fair and appropriate," says McGowan.

The creation of a process that will increase the minimum wage, the implementation of the farmworker safety legislation, the removal of a flat tax and the increase to the corporate tax are all issues unions and workers have wanted to see put in place for years. With a New Democrat government, those policies became possible.

And, Foster says, there is room for movement on upcoming issues. Long standing issues such as the workers' compensation board review, the plans to review the labour code and employment, will all make a difference for working conditions in the province -- issues labour has wanted addressed for years.

But Foster warns it's important to remember that just because a New Democrat government is in office, doesn't mean it's in power.

"The right over the last eight months or so, in general, has been more effective at mobilizing their people," says Foster.

Partially this is due to a reorientation in how unions and progressive groups lobby and mobilize.

The surprise victory of the New Democrats left natural allies in union, anti-poverty and environmental organizations adjusting to a new reality. Groups are still learning how to lobby a government more friendly to their ideas, says Foster, which has left mobilization behind for the last few months.

With low oil prices, the New Democrats have more difficult decisions to make in the upcoming budget. Foster says labour groups must be prepared for the tensions those economic realities will cause.

"Progressives need to continue to be a loud and vocal voice for a counter-pressure," he says.