Fresh from victory at the Canadian Human Rights Tribunal, Cindy Blackstock said she persisted with her landmark child welfare case for nine years because, "It's our job as adults to stand up for kids." 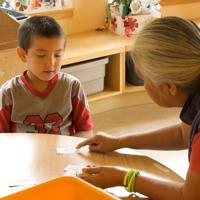 That, despite spending nine years feeling "tired and sometimes scared because of what the government was doing to me personally," she told The Tyee.

That treatment, according to Canada's privacy commissioner, included spying on her online activities and "surreptitious monitoring" of her public appearances -- though the commissioner didn't find the latter actions inappropriate.

On Tuesday, the tribunal ruled in favour of Blackstock's First Nations Child and Family Caring Society -- concluding the federal government racially discriminated against 163,000 First Nations children by denying them the same funding for child protection, education and health as Canadian kids.

"It is only because of their race and/or national or ethnic origin that they suffer the adverse impacts," the tribunal concluded regarding aboriginal children being removed from their families at disproportionate rates, and suffering "service gaps, delays and denials."

The federal government welcomed the ruling and committed to equalizing investments for all children, "not just in terms of money [but] in terms of outcomes," Attorney General Jody Wilson-Raybould told reporters.

Here's what Blackstock had to say about what kept her going for nearly a decade -- and what she wants government to do to "reset" the funding system for First Nations children. Interview edited for clarity and length.

The Tyee: You've had a long series of victories, despite the government trying to challenge you at every step and even spying on you, as the privacy commissioner ruled.

Cindy Blackstock: That's the good thing when you're just standing up for the truth. Eventually it comes out. We wanted to bring to the public's attention the long-standing inequity First Nations children [face]. The best way to do that is to lay the facts bare before people and let them make up their own minds.

In many ways, this was an opportunity to reset the conscience of the country. We cannot turn our minds away from this and feel comfort because we've heard nice words from the government. We need to keep our eyes on this.

Could you paint a picture of this inequality?

Before we brought this case in 2007, we worked for over 10 years with the federal government to document the inequalities, to show how they were driving children into care -- particularly in terms of a lack of prevention services -- and also to come up with solutions. The federal government didn't do it, so we filed the case.

The amount of the shortfall is 22 to 34 per cent depending on the region, and this doesn't take into account the inter-generational affects of residential schools. They're providing far fewer services to keep children safely at home for some of the highest-needs children in the country.

Under the Harper government, we kept hearing that the numbers were being made up, that First Nations children were not receiving 70 cents on every dollar Canadians got -- they suggested it was a product of internal mismanagement on reserves.

It was ridiculous in the first place. What they didn't say under that regime is that, in these legal proceedings, you're allowed to call expert witnesses. They hired KPMG accounting firm to go over our calculations of the shortfall -- but unfortunately for the government, KPMG agreed with us. We actually filed the federal government's expert report on our side of the case. They couldn't find one expert witness to confirm what they were saying.

You say you felt confident in the truth, but it doesn't always win out in the courts. In your case, was there any doubt in your mind? Did you have a sleepless night in the lead-up to the ruling?

When I heard it was coming, I was both relieved, joyful and a bit nervous. I wasn't so nervous in terms of the facts, because it was so overwhelming. I saw through all 72 days of those hearings and read 80,000 internal documents; I would have been shocked had it gone any other way.

But what is the government going to do with it? I expected the government would come out and say that they welcomed the decision. But that doesn't change children's lives. Where the government has repeatedly fallen down over the last 148 years when it comes to First Nations children is implementing the solutions that would make a difference. That's what I'm waiting for.

If there were three steps the government could take immediately to reset this, what would they be?

We have on our website ways they can fix the formula and relieve the suffering for these 163,000 children right now, while we work on longer-term solutions.

Number one, they could provide prevention services in their funding formula... to keep families together. They could release that money.

Number two, they could implement Jordan's Principle, which means that First Nations children can access government services on the same terms as other kids. What's been happening up until now is there's buck passing, particularly between Health Canada and Indian Affairs about how should pay for services for kids.

There was a four-year-old little girl who went in for dental surgery. Something went horribly wrong and she was given equipment to deal with respiratory issues the doctor said she required. Health Canada and Indian Affairs argued [over funding] for well over a month.

It echoes the original case that led to Jordan's Principle -- Jordan River Anderson, a five-year-old with a rare muscular disorder from Norway House First Nation in Manitoba.

He spent over two years unnecessarily in a hospital, and sadly died there [in 2005] because governments couldn't agree on who should pay because he was a First Nations child. We saw repeated examples in the evidence before the tribunal that this is still going on. I know of cases right now where that's going on.

The other thing they need to do is implement all the things on our website. They're not just my ideas -- they're recommendations jointly agreed to by the government before to fix the problem that they've never done. They haven't committed to these things yet. We all need to be vigilant and watch the government for what it does.

Five or 10 years in the future, is there something you'd like to see that's fundamentally different -- other than obviously ending the funding gap -- in the way governments approach First Nations children on reserve?

That they really believe in the ability of communities to make the best decisions for kids. We have a process called Touchstones of Hope that brings together the very best Western child welfare practices and resurfaces traditional [Indigenous] ways of caring. When it come down to it, child protection is really about how well we can support communities to assume that responsibility for looking out for kids at a grassroots level. I'm hoping we see a lot of investment in that particular area.

The other thing is that we need to address poverty. The vast majority of First Nations children go into [government] care because of poverty and poor housing. The United States is a step ahead of us here: there are 17 U.S. states and the District of Columbia where the child welfare statutes expressly say that you cannot remove a child for poverty. As Minister Bennett said the other day in her response: "If there's no food in the fridge, you get some food in the fridge... not take the kid away."

What's carried you through and kept you going since 2007? Was it discouraging at times?

The families were my inspiration. Hearing stories like that four-year-old little girl -- how could you give up? It's our job as adults to stand up for kids. Absolutely I was tired and sometimes scared because of what the government was doing to me personally. But I realized that it's my job to stand up for that four-year-old and for kids like Jordan. I'm thinking that a lot of Canadians are shocked to learn about these inequalities and will be standing with us too.