An isolated northern Ontario First Nation under boil-water advisory since 1997 is drinking in victory today. 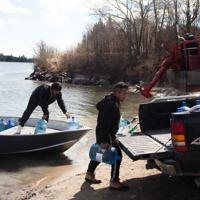 Updated: Will Canada Unblock this People's 'Road to Freedom'?

This morning in Winnipeg, Indigenous and Northern Affairs Minister Carolyn Bennett is expected to commit funding for an all-season road to Shoal Lake 40 First Nation, according to the band's chief Erwin Redsky. The federal pledge represents the final third of a project already backed by provincial and city governments.

Called "Freedom Road" by the 322-resident reserve on the Ontario-Manitoba border, the access route has been a dream of the community for 13 years.

"It's a historic day for Shoal Lake that's been a long time coming," Redsky told The Tyee in a phone interview yesterday. "Just to get the three levels of government to commit at the same time is a major milestone in itself."

For years, the reserve has been forced to transport water by hand in 20-litre jugs. In warmer months, a ferry is residents' only connection to the outside world, but the neighbouring First Nation charges a toll for use of the road. When the lake is frozen in winter, residents risk their safety making the perilous crossing on foot or car.

Without a year-round road, said Redsky, the reserve can't afford to build water or sewage treatment facilities, develop economically or access urgent medical aid. He sees the 28-kilometre stretch of gravel as a path to a better life.

"I've got a lot of hope for the future, especially for the kids," Redsky said. "This'll be the last generation to experience this very difficult way of life."

Sitting atop Winnipeg's drinking water source, the isolated band has been under boil-water advisory for 18 years -- one of 126 First Nations still unable to drink from their own taps in the world's 11th-wealthiest country.

The Tyee visited the remote community in June. During the election campaign, the Conservatives noted Shoal Lake's plight but only committed to backing Freedom Road "in principle" and pledged only $1 million towards its design, not construction.

That caused band residents, hopeful for a federal change of heart, to burst into tears in the reserve's hockey arena this summer while then-natural resource minister Greg Rickford fled reporters' questions.

Minister Bennett could not be reached for immediate comment, but yesterday confirmed the federal government's support of Freedom Road in a Canadian Press interview.

Chief Redsky would not provide details of the funding arrangement but said he understands it will be one-third of the construction costs from Winnipeg, Manitoba and the federal government. However, he said the $30-million cost estimate often cited in media reports is "probably outdated" and too low.

Once construction begins, he estimated Freedom Road would take at least two years to complete and said the band is currently negotiating community benefit agreements with Manitoba so Shoal Lake gets the most out of construction, particularly local jobs.

Redsky thanked the First Nation's many "friends and allies who supported us over the years" in lobbying for a federal commitment. "We're going to continue working toward the building of Freedom Road."