Raffling hunting rifles, hosting ice-fishing derbies and daring the local Mounties to haul you away from your ice auger aren't typical activist routines. 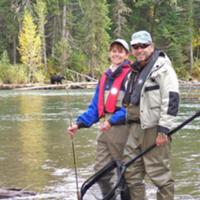 'They Killed My Beautiful Lake'

Then again, Rick McGowan is no ordinary activist. Last January, the 63-year-old director of the Nicola Valley Fish and Game Club and nine other anglers were threatened with arrest after being ticketed for trespassing on private property surrounding a small lake near Merritt, British Columbia.

Corbett Lake, like every lake and river in the province, belongs to the Crown.

But the land around it, and at least two-dozen other rainbow trout-filled lakes in the Interior, is partly owned by American billionaire Stan Kroenke. Kroenke owns the NFL's St. Louis Rams and Arsenal soccer club in Britain's Premier League. His wife, Ann Walton Kroenke, is the heir of Walmart co-founder James Walton. She owns the NBA's Denver Nuggets and the NHL's Colorado Avalanche.

Kroenke's net worth is $10 billion Canadian. McGowan is a retired provincial government highways engineer. His net worth is considerably less.

Crown prosecutors stayed the trespassing charges against the 10 anglers on Oct. 21.

"It was not going to be a cost-effective trial," explained Merritt RCMP Sgt. Norm Flemming in a phone interview. "I use the phrase, 'We've got bigger fish to fry,' and the pun is fully intended," he said, with a wry chuckle.

But winter is coming, and McGowan and the anglers charged last winter say they are heading back to Corbett Lake as soon as the ice is thick enough.

And if police tell McGowan to stop fishing there, he intends to keep his answer short: "Lookit, this time you'll have to arrest me and haul me off the damn lake."

Kroenke bought the Douglas Lake Cattle Company in 2004, gaining control of more than 2,000 square kilometres in the Interior. Since then, he has bought more land and expanded the 129-year-old operation's range.

Corbett Lake Lodge shares the lakefront with the company and stocks it with rainbow trout. It restricts access to those who pay. Neither the lodge nor Douglas Lake Cattle Company were available for interviews.

Sgt. Flemming sighed when asked about the "complicated" 30-year-old dispute between the company and the fish and game club. "I've spent far too much time involved in this," he said.

Corbett Lake, about 15 kilometres southeast of Merritt, has now been swept into the battle between the company and the club.

That dispute first exploded with arrests and civil disobedience over access to two other popular fishing spots, Stoney and Minnie Lakes. The company blocked access to roads it claims to own, but which the anglers argue remain public rights-of-way.

In B.C., all lakes and the fish in them belong to the Crown, even if surrounded by private property. But whether the public is permitted to access them is another question -- one currently before the B.C. Supreme Court.

The Douglas Lake Cattle Company recently sued the fish and game club and the provincial government, claiming it owns the fish in Stoney and Minnie Lakes. In court filings last month the ranch argued that because it installed fish barriers around the two lakes, "All the fish in the lakes are effectively domestic animals."

"They are private property owned and controlled by the ranch, and taking any fish from the lakes constitutes a trespass and the conversion of the ranch's property," the cattle company claimed.

Members of the fish and game club have been trespassing and taking the company's fish for decades, the court documents maintain. "If portions of the lakes are reserved to the Crown, it does not necessarily follow that the public has rights of access, whether over privately owned land or otherwise," the company argued.

The province, also named in the ranch's lawsuit, insists the land beneath both Stoney and Minnie Lakes are "under Crown ownership." But over the past century private dams have enlarged the lakes' size, the government said, so that water nearest the lakeshore is private property.

"However, the actual ownership of the lake beds is not material to the issue of access to the lakes," said Ministry of Forests, Lands and Natural Resource spokesman Greig Bethel in an email, "since they are both entirely surrounded by private land. Legal access to these lakes therefore requires the permission of the landowner."

"If they succeed in putting up locked gates," he argued, "they get to take all these public resources for free. They're stealing natural resources from our unborn children."

The court has rejected the fishing club's bid to have its legal costs covered. So the Merritt group launched an online fundraising campaign and kicked off monthly rifle draws to cover legal costs McGowan estimated could top $200,000.

McGowan said depositions for the Supreme Court case will begin in the New Year.

'I don't even fish': Mountie

For the RCMP's Flemming, Corbett Lake is a separate issue from the battle over access to Stoney and Minnie Lakes.

"Where they're concerned about a private entity removing recreational fishing opportunities and sites for the good taxpaying people of B.C., I'm sympathetic to that cause," Flemming said. "Why is some billionaire in the U.S. deciding we can't go fishing in a lake 25 kilometres from our door?"

But if the club members want to fight for access to Corbett Lake they should go to court, Flemming said.

"They said, 'You're wrong and we'll keep fishing there.' I asked them specifically not to do that: 'Do not force my hand -- if you have a legitimate claim, take it to court and let court decide if you're right or not.'"

Flemming said he's "not here to be liked or loved," but to keep the peace and ensure nobody is hurt. He said he often feels caught in the middle of the long-standing dispute.

"I don't even fish," he said. "I'm only here trying to uphold the law, and all I can do here is base my decisions on the evidence available to me.

"If I'm made out to be villainous, if they need a polarizing figure, fine -- let it be me. The number of times goat horns have been hung on me, I don't have enough head left to put them."

Flemming noted prosecutors could lay mischief charges if the anglers attempt to access Corbett Lake again, an offence that can carry up two years in prison. But he hopes a standoff can be averted this winter.

"We don't want someone to overreact -- to criminalize themselves -- over something that can be avoided if there is a legal process available to go through," he said. "These guys are local men -- good fellas doing what they're passionate about and believe in -- and I would hate for any of them to be found guilty of a criminal offence at the end of day."

The ice is still thin on Corbett Lake. But in another week or two, people will go fishing, McGowan said, despite Sgt. Flemming's warnings.

"Nobody's going to intimidate us from going to a public place," he said. "If we don't win this fight our grandkids will never get access. The only way to stop this is to confront it and call their bluff."

"We got a hell of a fight ahead of us," McGowan added, "but we're stubborn."