If Jim Pattison isn't going to provide jobs for British Columbians, the commercial licenses for his fishing fleets should be revoked by Ottawa, says Canada's largest private-sector union. 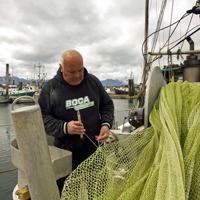 Unifor issued a press release yesterday saying that Canfisco's plan to close a salmon cannery in Prince Rupert, on B.C.'s northwest coast, will cost up to 500 jobs in the city of 12,000.

The plan was made public last week by the company, part of the Jim Pattison Group that bears the billionaire's name.

Unifor said it was told by the company that low salmon returns are the reason for the closure.

However, the union said it suspects the company is planning on outsourcing its processing outside of the country.

"A corporate license to fish Canadian waters is not a right; it is a privilege that comes with responsibilities to Canadians," said Unifor's western director Joie Warnock in the press release.

"If Jim Pattison Group is unwilling to create cannery jobs, those salmon licenses can go to independent and First Nations fish harvesters, like most commercial fishing licenses on the east coast."

Canfisco did not respond to a Tyee request for comment on Thursday, but a spokesperson told the Vancouver Sun that the union inflated the job-loss estimates, and that only a "tiny amount" of salmon processed by the cannery this summer was caught by Canfisco boats.

Governments must step up: NDP's Cullen

Prince Rupert NDP MP Nathan Cullen said the loss of the cannery will all but wipe out local fish processing jobs, as companies increasingly outsource such work to places like China and the United States.

"A very minimal amount of processing is being done [here], yet we're taking record amounts of fish and all kinds of seafood products out of the waters of B.C.," he said. "It's insulting and devastating that we're seeing governments so passive."

Cullen said he is drafting a policy motion that would tie access to Canada's fish with a requirement that it be processed adjacent to where it was caught.

He said he believes the signing of the Trans-Pacific Partnership, a major trade deal with Pacific Ocean countries, will speed up the trend of outsourcing processing jobs in other sectors, too.

A request for comment to the minister responsible for Fisheries and Oceans Canada was not returned by press time.