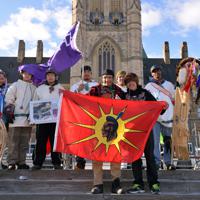 Prime Minister Justin Trudeau delivered instructions Friday to the ministers of transport, fisheries, natural resources and environment to formalize a moratorium that experts say will block the controversial Northern Gateway project from continuing.

A ban would prevent hundreds of tankers each year from carrying diluted bitumen extracted from Alberta's oil sands and piped up to northern B.C. from being shipped for export overseas.

''It will mean that Northern Gateway will never happen,'' said Gerald Graham, a Victoria consultant specializing in oil spills for more than 40 years.

He said it remains to be seen what oil and gas activities will be permitted and which communities could be affected.

''It's one thing to say what can't take place, but another to say what will be allowed.''

The moratorium makes official a non-binding motion the House of Commons passed in 2010. It would put the Dixon Entrance, Hecate Strait and Queen Charlotte Sound off limits to tanker traffic in the government's bid to protect ecologically sensitive areas.

''I celebrated 44 years ago and I may be celebrating again. It's basically an echo,'' said David Anderson, who chaired the government's environmental committee in 1972 and later became Liberal environment minister.

He noted that only former prime minister Stephen Harper opposed the ban since it was initially introduced.

''It's keeping with the status quo, mainly, but making it a more formal and clearer status quo than the industry has been willing to accept over the last few years,'' Anderson said. ''It makes it clear it's pointless to try to develop a port for oil tankers for the northwest coast of Canada.''

An array of 30 environmental, First Nations and northern B.C. groups also applauded Trudeau's edict by sending him an open letter of support.

However, a spokesman for Northern Gateway said the company will remain committed to the ''essential'' infrastructure.

Ivan Giesbrecht said in a statement that staff look forward to an opportunity to meet with Trudeau to update him on the project. He noted a tanker ban has a potential economic impact on First Nations and Metis communities in the region.

''We have made significant progress building support on the B.C. coast and along the pipeline corridor,'' he said.

''We share the vision of the Trudeau government that energy projects must incorporate world-leading environmental standards and First Nations and Metis ownership.''

Greg Stringham, a vice-president with the Canadian Association of Petroleum Producers, said market access for ''responsibly produced'' crude remains a priority for the industry.

He added members are prepared to institute ''any improvements deemed necessary'' to ensure products are safely transported.

The $7-billion Northern Gateway project received government approval in June 2014 upon review by the National Energy Board, contingent on 209 conditions. The Federal Court of Appeal is currently considering whether to overturn the approval after a court challenge by First Nations and environmental groups.

The company estimated it would boost Canada's gross domestic product by $300 billion over 30 years.

Trudeau also signalled Friday the re-opening of the Kitsilano coast guard base in Vancouver's English Bay. Mayor Gregor Robertson issued a statement calling it one of the most important public safety resources for the city's busy harbour.

The former Conservative government's closure of the station in 2013 was loudly panned at the time and again when a grain ship spilled 2,800 litres of bunker fuel in the harbour last April.