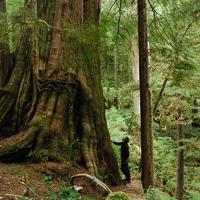 Logging Plans Could Rekindle BC's War in the Woods

Dave Cascagnette, Trevor Schinkel and Jennifer Whitehouse acted on their own, not as part of any organized group, according to an announcement the Friends of Carmanah/Walbran distributed.

The group called the action "a strong sign of the growing public opposition to the continued industrial destruction of this threatened rainforest watershed."

The three people had been camping in the area for as long as six weeks before deciding to erect a checkpoint and turn back work crews in the Glad Lake area of the Walbran Valley. The area is to the south of the 3.2 hectare cutblock 4424, where the government has controversially approved a Teal Cedar Products Ltd. cutting permit.

The protesting individuals could not be reached for comment. Nor was a representative of the Friends of Carmanah/Walbran available for an interview by publication time.

A spokesperson for the ministry of forests, lands and natural resource operations, headed by Steve Thomson, said in an email, "This afternoon, ministry staff were advised by the company that some protestors would not allow them to carry on with road work that is necessary to maintain water quality and prevent environmental damage from all the recent rain."

He said, "It will be up to the company to decide what steps it wants to take."

Teal Jones Group officials did not immediately respond to The Tyee's phone message.

Torrance Coste, the Vancouver Island campaigner with the Wilderness Committee environmental group, was also in the area Tuesday. He stressed that the people blocking the work crew were not connected with his or any other group.

"They were saying enough is enough," he said. "They want to get Teal Jones' attention any way they can."

A police officer from Lake Cowichan was on the scene, but there were no arrests and eventually the workers were allowed through the checkpoint, he said. "Things were civil. There were a lot of conversations happening."

Protecting the central Walbran Valley has been a priority for the Wilderness Committee ever since 1995 when the area was left out of Carmanah Walbran Provincial Park, Coste said. The valley is key since 90 per cent of the low-elevation old growth on Vancouver Island has already been logged, he said.

There's a role for forestry in the economy, but not cutting the last remaining old growth, he said. "Any way you slice it, that's coming to an end on Vancouver Island."

Coste said his group has been warning the government that failure to protect the Walbran would lead to confrontation between protesters and workers. "Different folks are taking different stands out there," he said. "This is what we said was going to happen."