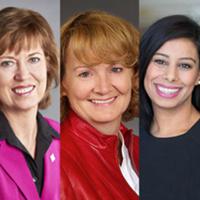 In the legislature's 100-year history, no one had thought to write provisions for an MLA to take time off to give birth -- until Calgary's Stephanie McLean announced she's expecting. On the books McLean found she could only take leaves due to illness, and her pay could be cut for missing a session. Last week Premier Rachel Notley vowed to change the "archaic" rules.

"We're decades off," says Melanee Thomas, an associate professor of political science at the University of Calgary. "We've just had identifiable demographic groups systematically excluded from electoral politics for so long that we have not even talked about what it means for someone to be pregnant in terms of a leave policy."

Alberta lags behind the United States, which provides nursing rooms for elected mothers in the House of Representatives and Congress to care for their children. But maternity leave is only the start, says Thomas.

Although the legislature still sits at one third women, the NDP governing caucus is the closest in Canada to gender parity. Earlier this spring it appointed a parity cabinet and created the Ministry of Status of Women for the first time in 19 years. (That cabinet falls short on ethnic diversity, critics note).

Former Liberal MLA Laurie Blakeman points out it was only 20 years ago that women's washrooms were added to the legislature.

"Just as I was starting they took the urinals out and allowed for another stall," says Blakeman, who was elected in 1997.

Blakeman says at the time the rules were written for men. "The dress code in our Standing Orders didn't even reference women, it just said men are expected to wear a jacket and tie."

By facing barriers big and small and tabling legislation that draws on women's experience, Alberta's women MLAs have already proven what a difference representation can make. Perhaps a preview of what we can expect at the federal level, here are a few more ways they're changing provincial politics.

"I've always been a strong activist for women's issues," says Drever, who previous to being elected was a sociology student with an interest in women's issues. "I feel it hasn't been addressed enough in the past 44 years."

Drever, who sits as an independent, is one of the 29 women elected to the Alberta legislature.

The caucus achieves the 30 per cent critical mass the United Nations estimates is required to change the conversation and create real representation on issues. It means proposals such as Drever's no longer have to stop at simply creating conversation, they can present new realities for women in one of the most unequal provinces in the country.

"We're having these conversations now because we've achieved that critical mass," says Shannon Phillips, status of women minister and a parent to two young children.

The NDP has already taken action on domestic violence increasing the guaranteed annual funding for women's shelters by 44 per cent. The announcement included specific money for on-reserve shelters. Funded federally, those shelters haven't seen a funding increase since 2007.

Alberta's family violence rates are higher than the national average. And Calgary and Edmonton have both been ranked by the Canadian Centre for Policy Alternatives as the worst cities for women to live in, which included harassment levels.

"How do you ignore that?" asks Drever.

With a record-breaking number of women in government, it may no longer be possible.

Back in 2007, Blakeman worked with Progressive Conservative MLA Dave Hancock to remove late night sittings of the legislature.

"The Tories used late night sittings to beat us down," says Blakeman. She recalled only one other MLA with small children at that time. When sittings stretched from 11 p.m. to midnight and sometimes 3 a.m., their colleagues would cover shifts so they could attend kids' soccer games.

Today, the NDP is looking at how to change process to create a bit more work-life balance for MLAs. A proposal was floated to start session at 9 a.m. in order to prevent late night sittings. Another recently-passed proposal considers childcare spaces in government buildings.

For Phillips, that's a good reason to "shine a light" on the same work-life balance issues constituents face. "We'd be having these conversations regardless because working families need these things."

"This type of family policy is stereotyped as for women," adds Thomas. "But if you actually start coming up with work-life balance solutions for elected representatives there's no reason not to have it for the rest of the population."

Phillips says achieving gender balance does not end at elected officials. Alberta's public service is two-thirds women, but only one third are in executive positions. At the deputy minister level, previous to the New Democrats election, the numbers hovered around 70 per cent men to 30 per cent women. Similarly the agencies, boards and committees of government have remained the business of men with appointments going two-thirds to men.

Phillips says recruitment needs to focus on diversity, and on the civil service side of things, senior officials and staff are receiving gender-based analysis and training to encourage understanding of diversity. She says her own ministry looks at diversity beyond just gender and attempts to hire candidates from all backgrounds.

"This is a matter that requires an activist approach," says Phillips. "You do not get critical mass without talking about it all the time."

And with four more years of this gender emphasis Alberta likely has a lot more conversation, and a few more firsts ahead of it.