The appointment of an Indigenous person to oversee Canada's fisheries and oceans could signify a new era for aboriginal fishing rights in British Columbia, says a salmon advocate. 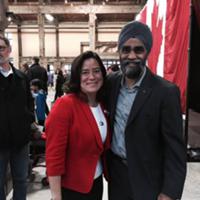 Tootoo logged 14 years experience as an MLA in the territory's legislature, up until 2013. During that time, he served in cabinet in a variety of positions, including minister of education.

The appointment of an Indigenous person as the minister responsible for Canadian fisheries is "interesting and encouraging" from a British Columbia perspective, and also for salmon, said one fisheries expert.

Aaron Hill of the Watershed Watch Salmon Society said the appointment could mean a "seismic shift" in Ottawa's approach to First Nations fisheries.

"We've had a slew of court decision over the past few years continually affirming aboriginal rights and titles," Hill said. "It will be very interesting now that we have an aboriginal minister while this is happening."

One of the larger decisions came out of the Supreme Court of Canada in 2014 and upheld the rights of five bands in B.C. to sell their catch.

Hill said such decisions have made aboriginal fisheries issues more important in the province, and may affect how commercial salmon fisheries are managed.

"First Nations rights-based fisheries are central to that process," he said. "There's a general revitalization of aboriginal fisheries that were outlawed a hundred years ago and are slowly coming back."

Hill also cited the Liberal party's promise to adopt recommendations in the Cohen Commission, an inquiry into the decline of sockeye salmon in the Fraser River, as good news for B.C. fisheries.

Newly elected Liberal MP Pam Goldsmith-Jones recently said she heard a lot of concerns about wild salmon and other environmental issues while campaigning in her riding of West Vancouver-Sunshine Coast-Sea to Sky Country.

Despite the importance of natural resources, environmental issues and fisheries in B.C., no ministers from the province were handed the relevant portfolios. But that isn't a great concern, according to the president of the Union of B.C. Indian Chiefs.

Grand Chief Stewart Phillip said while he is happy with the shift on the fisheries file, overall the Trudeau cabinet looks to offer a far better working relationship with aboriginal people than the previous Conservative government.

Phillip said the appointment of Jody Wilson-Raybould, an aboriginal woman, to the position of attorney general is another cause for "optimism" and said he likes the mix of cabinet.

"I can see all of them working very closely together," he said. "I think all of these appointments have a certain synergy, and lead us away from a very adversarial, hostile approach to issues."

While the Liberals' tone and attitude towards First Nations issues is different, Phillip said he doesn't believe it will stop there and that the party sincerely wants to work on long-existing concerns in Canada's aboriginal communities.

For First Nations in British Columbia, that will make a big difference, he said.

"We survived the long, dark night of the Harper government and we're coming into the dawn of a new day with the Trudeau government," he said. "It presents a lot of opportunity."