[Editor's note: Join Dr. Gordon Laxer, political economist and co-founder of the Parkland Institute, for a free talk about 'After the Sands,' a new book for anyone concerned about rising sea levels, pipeline and tanker spills, climate change chaos and Canada's future in a carbon restricted world. Tuesday, Oct. 27 at 7 p.m., The Hive, 128 W. Hastings St., Vancouver.] 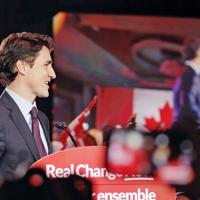 And the new Liberal government should take steps to increase Canadian ownership in the energy sector if it wants to achieve those goals, said Laxer, whose latest book, After the Sands, argues that Canada must improve its energy security and become a low-carbon society.

Laxer said Canada is highly vulnerable to another oil crisis, which he expects in the next couple of years. The United States is working to lower oil imports and has created strategic oil reserves, Laxer said. Other countries have also focused on energy security.

"We import 40 per cent of our oil, and we have no program," he said. "We belong to the International Energy Agency. There are 28 countries; 26 of them have strategic petroleum reserves. Canada and Australia do not."

Improving energy security will also play a big part in reducing greenhouse gas emissions and reshaping the economy, said Laxer, former head of the Parkland Institute at the University of Alberta.

The Canadian government has focused on increasing energy exports, and the country now exports about four times as much oil as it imports.

The government's promotion of rapid development of the Alberta tarsands has made them the fastest growing source of greenhouse gas emissions in the country, Laxer said.

"Is Trudeau going to keep the energy superpower idea that we've got to export more and more of this stuff?" Laxer asked. "Or are we going to start supplying Canadians with their own resources and ramp (exports) down?"

Quick action is needed to meet the target of slashing emissions by 80 per cent by 2050, the goal set by Parliament before the legislation was defeated in the Senate in 2011, Laxer said. "We don't need another government that's going to be setting great targets and doing nothing about it, which the Chr&eacutetien, Martin and Harper governments did."

Trudeau should phase out oil and gas exports and replace oil imports that now supply central and Eastern Canada with conventional oil from the west, Laxer said. That would cut down on the greenhouse gases needed to produce oil products for export while easing the economic impact on the oil patch, he said. Economic diversification would still be needed to replace lost jobs in the sector, he added.

But reducing import dependency and cutting carbon emissions requires the new government to tackle foreign ownership in the energy sector, he added.

Some restrictions have been imposed on foreign investments in major oil projects. The controversial $15-billion sale of Nexen to the China National Offshore Oil Corp., a state-owned company, in 2013 triggered tighter ownership rules for companies controlled by foreign governments.

But in 2012 oil projects were said to be more than 70 per cent foreign owned.

"We're not going to have an influence on foreign governments. If the corporations are owned and controlled abroad they will be protected by those governments," he said. "That's what all those free trade agreements are about."

Canada must pull away from globalization and concentrate on companies with a stake in the country, he said.

That won't be an easy task for Trudeau, Laxer acknowledged. Pierre Trudeau, Justin's father, introduced the National Energy Program in 1980 to increase energy self-sufficiency, increase federal revenues and reduce foreign ownership, which had been estimated at 90 per cent. Within four years about 47 per cent of Canada's oil assets were domestically owned.

But the program caused a major battle with Alberta and, combined with a global recession, hammered the oil patch.

Laxer expressed hope the Liberals would take a better position on energy security than the Harper government. But it may be difficult for Trudeau to take tough action on energy because of the lasting stigma around the NEP, he noted.

Trudeau the younger acknowledges as much. In a 2013 speech to the Calgary Petroleum Club, Justin Trudeau said he would work with the provinces to create a national energy strategy, including a national approach to pipelines and development.

"Now, believe me, the irony of this is not lost on me," Trudeau said. "I really wish it didn't have to fall on some guy named Trudeau to propose a national energy anything."

Trudeau has also said that programs to set a price on carbon emissions should be left to provinces. Laxer said carbon pricing doesn't work well. The rate can't be set high enough to motivate wealthy people to change their behavior and cut emissions without hurting those with lower incomes.