Some of Canada's top election strategists sat in downtown Vancouver yesterday to dissect Alberta's New Democrat landslide upset four weeks ago -- and what it might mean for political life outside Wild Rose Country. 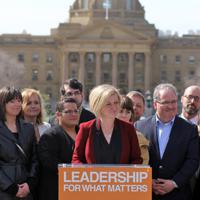 Five Takeaways from the NDP Breakthrough in Alberta

Just hours earlier, 85 Alberta legislators -- 53 of them NDP -- swore their oath as MLAs, dozens of them new faces after NDP leader Rachel Notley produced her surprise majority win on May 5. It was an election that gripped the country and saw the Progressive Conservatives swept from office after more than four decades in power.

One of the panelists was Premier Christy Clark's former chief of staff, Mike McDonald, the BC Liberal campaign director behind the party's stunning 2013 re-election. Pollsters had predicted the BC NDP would take the reins.

McDonald, a life-long Liberal at both provincial and federal levels, congratulated the New Democrats -- his long-time and often bitter opponents on this side of the Rockies -- on their "historic" win.

"They had the right leader," he said. "They were ready, probably the most election-ready of the parties for what was a snap election, and in position to take advantage of the luck that was going to come their way."

Here are four takeaways from yesterday's discussion for voters outside Alberta.

While issues such as health care, education and government transparency dominated the Alberta election, the campaign also saw parties sparring over how the province had managed decades of its oil revenues and collected royalties from energy companies.

A few days before the election, The Tyee's Andrew Nikiforuk brought to light research that showed Alberta under the Progressive Conservatives had failed to collect $13 billion in oil and gas royalties because of a formula miscalculation in 2009.

The issue presented a perfect opportunity for the Alberta NDP and resonated with voters, said the party's campaign manager Gerry Scott, though he admitted "there were problems long before the price of oil dropped."

But when PC premier Jim Prentice unveiled an austerity budget that saw significant spending cuts to pay for the drop in revenues, the people turned on his party, Scott said.

"[Prentice] spent literally months telling the people of Alberta that there were no options... this was a doom and gloom message day after day, week after week, month after month: 'Oil prices are down, life as we know it is over, and there isn't a hell of a lot I as premier can do about it other than raise your taxes and cut your health and education,'" Scott said.

As Scott puts it, Alberta had found itself in a deadlock over how to draw benefits from its once booming energy sector. The deadlock was broken on May 5, he said.

"There will [now] be a debate, the numbers will be made public," he said of oil royalty calculations. "When oil prices are low, it's a tougher environment to extract more revenue. That realism will be there. But there'll also be some honesty and an insistence on a public debate that has been missing for a long time."

Impressive turnout, but will it last?

As McDonald argued, one major takeaway from the Alberta election results, particularly for federal campaigners, was the increase in voter turnout. That will undoubtedly be on the minds of federal parties come autumn.

Fifty-eight per cent of eligible voters turned out to the polls in Alberta. That's an improvement for a province where 54 per cent turned out in 2012, and 41 per cent in 2008. It was only two per cent lower than the 1993 provincial election.

The Alberta NDP not only boosted its own share of the popular vote this time around, but ran a youthful campaign with many energetic volunteers sporting "Notley Crue" T-shirts and a message of generational change. Historically the party's support base has skewed to the under-34 crowd, but it's a demographic that normally has lower turnout as a group in Canada.

"To get to a win in this election was even more impressive in my mind," McDonald said. "The NDP quadrupled their popular vote. I don't think there's a party in Canada that got into government by quadrupling the popular vote."

Despite this praise, McDonald questioned whether Alberta's results represent an "Orange Wave" of the type ascribed to Quebec's historic election of federal New Democrats in 2011.

"A lot of things lined up for the NDP in ways they couldn't have organized themselves -- in terms of the PCs self-destruction and the situation with Wildrose -- but clearly in the campaign, the NDP put themselves in a very strong position to win," McDonald argued.

"Whether it extends beyond the Rockies is hard to say. The timing between now and the federal election bodes very well for the federal NDP. There's a honeymoon effect that's going to be in place."

Notley played the underdog, and won

McDonald favourably compared Notley with B.C. Premier Christy Clark, who successfully held onto power in 2013 after 12 years of BC Liberal rule -- and still managed to make her party seem like the "underdog" in the race to fend off the BC NDP's Adrian Dix.

"You had two female leaders who were very relatable to the mainstream public, who were juxtaposed with male leaders who had difficulty connecting on an emotional level with voters," McDonald said.

Notley also benefited from the underdog factor, he said. "Rachel Notley was really an insurgent taking over the PC's hegemonic power." Likewise, after the resignation of Gordon Campbell as premier, successor Christy Clark became perceived as "almost an insurgent within her own party," he said.

The takeaway from this, McDonald said, was that both leaders brought a "certain personal quality" to their election campaigns -- and importantly, "both nailed their debates."

"That character they had was embraced by their own political parties' campaign strategies," McDonald said.

Elections thrill -- then come the bumps

For Kerry Towle, a former Wildrose MLA who crossed the floor to the PCs, several post-victory bumps for the NDP are a reminder of the need for a tough opposition.

Not only did Notley suspend one of her young MLAs from her party to sit as an independent shortly after taking office, but controversy also swirled over the party using Notley's swearing-in ceremony to raise partisan funds.

"Let's not all assume it's all unicorns and rainbows there," Towle warned.

"She has a very new, dynamic party... She has young MLAs who are ideological," she said. "There's nothing wrong with that, but it's like herding cats. She's going to have to do some pretty intense media training, and then some very intense social media review."