A controversial right-wing Internet forum, which muted its members' posts after a series of defamation lawsuits, will start-up once again to fight Bill C-51 and Stephen Harper, according to its founder. 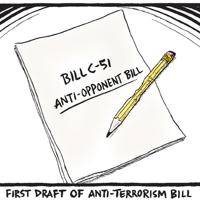 Pass that Bill! Slow that One Down! On Harper's Hurry-Up Hypocrisy

Connie Fournier, founder of Free Dominion, said there are many Canadian conservatives who don't support the proposed Anti-Terrorism Act. The long-time Conservative party supporter and former volunteer said she is considering casting a vote for the New Democrats over the issue.

Fournier said the NDP is the only major party with a position on the bill that she can support.

Free Dominion was launched in 2001 and served as an online meeting place with many sub-forums and threads for Canadian conservatives to express their view points and exchange ideas. At its peak it had 10,000 members and more than 3,000 visits each day, complete with meet ups and rallies in person.

In January 2014, Fournier closed the site to commenters after losing a libel lawsuit that awarded an Ottawa lawyer $42,000 and resulted in an injunction prohibiting any mention of him on the site. Fournier now operates Free Dominion as a blog, though she has filed an appeal over the court decision.

Lack of due process 'frightening'

In the meantime, Fournier said conservative-minded people who no longer support Harper need a place to organize and openly talk about their concerns.

"We feel like there are a lot of people who don't have a voice," Fournier said. "[There] are people who disagree with C-51, but they don't have blogs or anything else, and they really don't have a place to express themselves. So the Conservative party gets away with saying, 'This is the position of conservatives.'"

Fournier made an appearance at Ottawa committee meetings examining C-51 on Monday to speak against provisions in the bill, specifically on how vaguely they are written. She also expressed concerns about authorities having the ability to breach people's privacy.

Fournier appeared as part of a panel with OpenMedia and the Canadian Civil Liberties Association.

To justify Bill C-51, the Conservatives are now using many of the same arguments they rejected in the 2013 fight against Section 13 of the Human Rights Act, Fournier said.

Section 13 was referred to as the "hate speech provision," and Conservative opponents argued that abusers used it to stifle free speech.

Fournier said that parts of C-51 offer the same opportunities to falsely accuse people of actions without giving them a chance to properly defend themselves.