Feeling confused at the competing claims voiced by the Yes and No camps in the current transportation plebiscite? 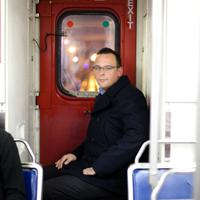 Ballots in the regional vote -- on whether to boost sales taxes by 0.5 per cent to add $7.7 billion to the transit and transportation budget -- are in the mail. Voters are asked to answer one question by May 29: "Do you support a new 0.5 per cent Metro Vancouver Congestion Improvement Tax, to be dedicated to the Mayors' Council transportation and transit plan?"

Sounds simple enough. Yet some of the most basic facts and statistics are up for dispute.

Nonetheless, The Tyee examined some of the rhetoric to help demystify the debate.

1. It's a referendum on public transit.

Despite what you'll see in many reports, it's not a referendum at all. Elections B.C. calls it a "Transportation and Transit Plebiscite," and under provincial law there's a slight difference from a referendum, which is defined as "a vote on a matter of public interest or concern... and the results are usually binding on government."

On the other hand, a plebiscite like the one currently underway is governed by different legislation. A B.C. plebiscite's primary aim is merely "to determine the opinion of voters on a matter of public concern," according to Elections B.C., and its results merely "may" be binding on government.

While headlines and #TransitReferendum hashtags are batted around, it's important to remember this is not just about public transit.

For instance, the 10-year, $7.7-billion proposal includes some big-ticket items to address the needs of the growing number of drivers in the region. Those investments include nearly $1 billion to replace and expand the 77-year-old Pattullo Bridge, owned and run by TransLink between Surrey and New Westminster. They also include $403 million to be pumped into the Major Road Network, the region's roughly 600 kilometres of roadways that are planned by a partnership of municipalities and the transport authority. An additional $180 million is set aside for cycling and pedestrian infrastructure, and $193 million for transit priority measures on some of the region's busiest routes.

But it is true that the majority of funding is earmarked for public transit -- including buses, new SkyTrain lines and improving existing ones, SeaBus and light rail.

Yes side proponents make the case that improving public transit services will draw more people out of their cars, thereby scaling back traffic jams for the remaining motorists.

One of the big questions is how much the average Metro Vancouverite can expect to pay if the Yes side wins. While the Mayors' Council on Regional Transportation says the 0.5 per cent sales tax boost will cost an average household $125 a year, the No side has questioned whether everything was accounted for to get such a low number -- which breaks down to only 35 cents a day.

The Canadian Taxpayers Federation's B.C. director puts the number at $258 per year.

"My criticism of the mayors' number is what they fail to include," said Jordan Bateman. For instance, Bateman argued that if taxes rise, business owners will raise prices for consumers.

Bateman's household estimate of $258 per year is derived from the total revenue needed for TransLink divided by the nearly one million households in the region.

However, the mayors argued that Bateman's math fails to acknowledge that taxes paid vary depending on a household's income -- and how much of that income actual buys non-essential goods and services eligible to be taxed. Based on those figures, according to the mayors, the roughly 70 per cent of the region's households that earn less than $100,000 a year will only pay between $53 and $116 more annually.

The only demographic that would pay even close to Bateman's tax figure every year are those who rake in more than $150,000 a year, or 12 per cent of the region, the mayors' council said.

3. The debate is between the political left versus right.

Although some have portrayed the plebiscite as a black-and-white issue dividing progressives from conservatives, it isn't so simple. Although centre-left municipal governments such as Vision Vancouver are pushing hard for a Yes vote, so are their political opponents in the Non-Partisan Association. Even Christy Clark indicated she would be voting Yes.

On the other hand, there are those in progressive circles who aren't buying into some of the more polarizing arguments. Left-leaning Burnaby Mayor Derek Corrigan has been one of the most prominent critics of the plebiscite exercise, arguing it is a poor way of making political decisions. But while some are urging voters to hold their noses and vote even if they don't agree with having to vote on needed infrastructure, Corrigan told the Province he "will probably vote against it" because he is "extremely concerned about giving more money to TransLink."

Those concerns echo the latest Angus Reid public opinion poll findings, which put hostility to the regional transit authority's record high among reasons many will vote No. Some other progressives have taken up the No cause, even though Bateman remains labelled the de facto spokesman against the Mayors' Plan. 24 Hours Vancouver columnist and blogger Laila Yuile has campaigned against what she calls a regressive flat tax on the region's residents, among other reasons. As well, former Bus Riders Union organizer Aiyanas Ormond and marijuana legalization advocate Jodie Emery are among those not leaping on the Yes bandwagon.

To muddy the ideological waters, the Yes coalition includes a diverse cross-section of the political spectrum, from labour unions and environmental groups to the Chamber of Commerce and Vancouver Board of Trade, normally associated with fiscal conservatism.

Although the Yes side insists that the plebiscite is about funding needed transportation infrastructure -- not TransLink -- opponents say the public agency is unaccountable, fiscally irresponsible and not to be trusted with an additional $7.7 billion.

According to the latest Angus Reid poll, two-thirds of the region's residents surveyed agreed that "TransLink needs to be overhauled before any big proposals go forward," including nearly half of those leaning towards voting Yes.

The authority's $468,000-a-year CEO, Ian Jarvis, stepped down early in the campaign and was replaced, but continues to be on contract at the same salary for the next year. Having two executives pulling nearly one million altogether has fuelled the criticism of waste and misspending.

"We used Seattle and Toronto, because the budget numbers are roughly comparable," Bateman said. "The CEO of TransLink gets between 40 per cent and 2.5 times more than the CEOs of the three largest transit organizations in North America."

On her blog, Globe and Mail columnist Frances Bula pointed out that other government agencies pay high salaries to their top executives. For instance, she wrote, Port Metro Vancouver's CEO earns $857,000 a year.

But other transit observers note that comparisons to other large-scale transit providers in Seattle and Toronto -- where executives earn several hundred thousand less than TransLink's CEOs -- also don't cover as broad a number of services as the Lower Mainland's single authority.

"As far as high salaries are concerned, we know in the private sector, CEOs are paid a lot of money, in some cases millions," said University of British Columbia's Centre for Transportation Studies professor Robin Lindsey. "But you need the best people to do very important jobs. TransLink is a very important job."

5. The transportation system -- even health and safety -- will suffer if the referendum fails.

"Our concern is about the risk of life and property damage in a gridlocked situation," claimed Len Garis, Surrey's Fire Chief, at a police conference last week. "If we have gridlock, we won't be able to get there in time."

Bateman on the No side said these kind of statements are exaggerated. He noted that some of the big-ticket items, such as the Pattullo Bridge and the Surrey LRT, are promised by regional leaders whether or not there's a Yes vote. Even the Mayors' Council spokesman admitted that the transit system sky will not fall if there's a No vote.

"I'm not sure that I'd go to that extreme," Port Coquitlam Mayor Greg Moore said in a phone interview. "But with no new funding going into transit... your population's increasing, your operating hours will go down and therefore your service levels will go down as well.

"We need this plan to go forward so we can accommodate that growth, or we'll be frankly stuck in our cars."