Ron, an East Hastings street vendor, first heard about Wednesday's major Port Metro Vancouver chemical fire -- as well as the city's warnings to stay indoors -- from another vendor. The homeless Downtown Eastside resident then went into a nearby convenience store to learn more. 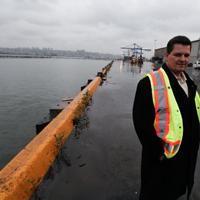 "They have a TV that's always on," he said. "They had it on the news and it was showing the fire."

Like many in the neighbourhood, Ron, who did not give his last name, didn't receive any of the numerous Twitter messages broadcast from emergency and health authorities, a reminder that while fast and far-reaching, social media does not reach everyone.

Still smouldering a day later, the fire started at 1.40 p.m. Wednesday in a port container that held trichloroisocyanuric acid, an industrial bleaching compound, according to officials. At a press conference Thursday afternoon, city officials described how they alerted the public to the safety hazards through a combination of Twitter, broadcast media and police with bullhorns patrolling the Downtown Eastside.

Another neighbourhood resident interviewed described how a police squad car pulled up to the curb outside the Patricia Hotel where he lives. The man, who didn't give his name, said an officer told the people gathered outside about the fire and advised them to "go someplace safe" inside the building. But that wasn't where he first heard about it. The news had already reached him through word of mouth.

"I heard people talking about the fact that it was on the news, but I don't pay attention to the news," said the man. "You hear things from people on the street before anyone else tells you -- before it's even on the news."

Vancouver's Downtown Eastside is one of the poorest neighbourhoods in Canada. The fact that some residents said they first heard of the emergency through word of mouth is a reminder that relying on social media during a public emergency carries a risk, despite its speed and wide reach.

"There's no single system that's going to reach everyone," explained emergency communications expert Peter Anderson, who teaches at Simon Fraser University and has helped pioneer tsunami warning systems in both Asia and West Coast North America. "To try to reach the public, you have to use every means possible."

Anderson gave Vancouver authorities a high grade for their response to Wednesday's fire, but said there is always more to learn as technology evolves, particularly in an ever-changing social media landscape.

"It's probably the easiest and quickest way to get important messages out," he said, "but of course not everyone's using Twitter. If you're trying to reach people in their vehicles, you don't want them tweeting -- others in the Downtown Eastside wouldn't have direct access to it."

In an interview, city manager Penny Ballem said the fire was an opportunity to put Vancouver's emergency response social media policy -- developed after the 2011 Stanley Cup riot -- to the test. But while many local residents don't use Twitter, she acknowledged, it is a vital way of reaching many thousands at once, especially when it's just one part of a multi-pronged strategy that includes reaching out to traditional media as well as warning people face to face, which the police did Wednesday.

When it comes to social media, she added, its also crucial the same messages need to be coordinated between multiple agencies' Twitter accounts to avoid confusion.

"We know we have a huge number of followers," she told The Tyee. "We're tracking all the hits, we have all the stats, because we're trying to learn from this.

"You have all kinds of channels -- you've got to use all or some of them, whatever meets your need the best."

But not all locals were happy with the city's outreach efforts in the Downtown Eastside. Several parents with children in affected schools wrote angry Facebook posts, saying warnings to schools should have been issued earlier on Wednesday.

In an email, Vancouver School Board spokeswoman Jen Hill wrote that the board's emergency operations centre "was activated" as soon as the board was alerted. Hill said the people in the 13 schools in the affected area were told to stay indoors, turn off ventilation systems, and shut windows and doors. But by the time the chemical fire's "status was upgraded" later in the afternoon, around 3:30 p.m., classes had already been dismissed, Hill said.

What lessons will be learned from Wednesday's port fire remain to be seen. But Anderson said the most important thing is to review how authorities communicate over a wide range of technologies, not just one.

"You can't just create a communications plan on paper and assume your job is done," he advised. "It's a continual process."

Kat Norris, who teaches after-school drumming and powwow dancing at Strathcona Elementary School, hadn't heard about the blaze when she left her East Vancouver home, despite the fact she had her radio and television on all afternoon.

Nearly two hours after the fire began, sometime after 3:30 p.m., the same time police sent a tweet telling people to stay indoors, Norris' group of students, teachers and support staff heard an announcement over the school's intercom and stopped drumming to listen. It was a warning to stay inside and shut windows and doors.

"It wasn't until I heard the time [the fire] actually happened -- around 1:40 p.m. -- that I got more stressed for everyone in the Downtown Eastside and people who wouldn't hear this announcement at all," she said. Immediately, people began to phone their homes to ensure their families had heard the news and were safe.

Then the group gathered together and turned on CBC Radio, a throwback to an era when radio was the primary means of communicating during disasters.

"We were all quiet, and listened to the radio," she said. "It was like one of those old movies where everyone is around the radio listening to what's happening."

Norris doesn't think the city or school board's response was adequate, considering the fact that many families don't use Twitter or even computers in some cases, and are not necessarily out on the street to hear police with bullhorns either. She suggests some kind of loud siren alarm for emergencies, encouraging locals to turn on their radios or televisions.

She said the port fire was a wake-up call.

"What's a faster way of letting a whole section of the city know what's happening?" she asked. "For the next go-round there needs to be a better system in place."