Thursday marked six months since the Imperial Metals-owned Mount Polley mine became the site of the most devastating tailings storage facility disaster in Canadian history, when nearly 25 million cubic metres of toxic mine effluent waste and chemicals spilled. 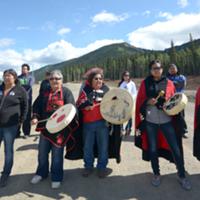 The spill damaged both Hazeltine Creek and Quesnel Lake, which reside within the traditional territorial boundaries of the Secwepemc Nation.

An official report on why the spill happened from the Mount Polley mine itself was set for release at the end of January, but the B.C. government altered the regulations. Now a report from Mount Polley isn't due until 2017.

Such moves from the provincial government have spurred the Secwepemc, and specifically the Xat'sūll (Soda Creek) First Nation, to takes steps to ensure nothing like Mount Polley happens again.

''One thing I want to make perfectly clear is this policy isn't a wish-list,'' said Jacinda Mack, leadership council co-ordinator. ''This is prescriptive. This is indigenous law. We did very thorough research and took more than two years to release the final document.''

The leadership council had mining experts and lawyers comb through the policy, which is now part of the partnership between mining proponents, the province, and the northern Shuswap. Mining proponents have a definite baseline framework to abide by on Secwepemc territory, Mack added.

''This goes above and beyond anything the B.C. government currently requires from a mining company,'' Mack said. ''We have compiled the best mining practices in the world into one document.''

The 54-page policy outlines exactly what the Secwepemc expect to happen within any current or future mine on its more than 53,000 square kilometres of traditional territory.

B.C.'s Minister of Energy and Mines, Bill Bennett, declined to comment on the policy. A spokesperson told Ricochet by email that the ''government is reviewing the northern Shuswap's mining policy document'' and is ''committed to working with First Nations so they can benefit from economic activity in their traditional territories.

A partnership is exactly what the Northern Secwepemc te Qelmucw leadership council is seeking in the release and implementation of the mining policy, and for that to truly take place, their involvement must become more than an afterthought, Mack said.

''We were never consulted when any mine on our territory was built,'' she said. ''We took that into consideration as well as the calls from the public to ensure the devastation caused by the Mount Polley spill is cleaned and never repeated.''

Judith Sayers, a strategic advisor and adjunct professor of business at the University of Victoria, has reviewed the mining policy and stresses the importance of it and similar documents from First Nations across Canada.

''As far as governance goes, it's good for any First Nation to create policy about mining, forestry, tourism or any use of land is necessary to move toward self-sufficiency,'' said Sayers, who is from the Hupacasath Nation. ''If you want to do business with us, this is how we want it done. And you decide if you want to do that or negotiate ways you want it done differently. Of course some companies may be shown the door, but that's business.''

'Precedent setting' for other First Nations

Part of the mining policy requires proponents to pay for the leadership council to conduct its own environmental review of any incident or proposal, with the council having the authority to accept or deny applications independent of non-First Nations authorities.

''Proponents have to know who they are attempting to enter into agreements with and policies like this, I think, can only be helpful in setting the table for negotiations,'' Sayers said. ''If all parties were at the table for Prosperity mines [projects proposed on Tsilhqot'in land], it may not have had to go to court three times.''

''We understand this is potentially precedent setting,'' Mack said. ''We've had other First Nations calling and asking if they can use our policy. The answer to that is yes. Change the name wherever (North Secwepemc te Qelmucw) appears. The more we put pressure on mining companies and the province the better for everyone.''

The Northern Secwepemc te Qelmucw leadership council have a representative who worked with a panel to uncover why the Mount Polley disaster happened.

Imperial Metals is pushing to reopen Mount Polley, but the leadership council says there is still much to do before that can be considered viable.

In an on-air interview on Jan. 30, following the release of the Mount Polley report, Minister Bennett failed to mention the Northern Secwepemc te Qelmucw report or the fact that the new mining policy is in effect after being adopted by the leadership council. He did say the province is working with industry representatives to resume production at Mount Polley.

''There remains much work ahead before we are even close to that discussion,'' Mack said. ''We are looking at several years of response and engagement in regards to direct impacts of this disaster. We are in no rush to push ahead and reopen.

''We are in the process of implementing our (council's) mining policy, and anticipate phasing in aspects of the policy in the next several months. I do not have details yet of what that would include, but it is our expectation that once we start implementing policy, we will follow up with the companies and government about compliance/non-compliance and next steps with regard to our title and rights.''

Sayers cautioned every First Nation to remember the reason and impact of any industrial business contract.

''These agreements belong to the people, meaning today's generation and future generations, because they have to ensure anything that happens on the land allows traditional use to continue and even improve,'' she said. ''Essentially it's the collective rights of a given community that will be affected by a mine.''

Sayers added that, to increase economic certainty in current and future development in the province, lands should be transferred back to their respective people.

''People have to learn how to do business the right way. And on First Nations territory, the right way is increasingly being initiated by aboriginal people based on right and title.''