Reporters in Ottawa became surly quickly Friday when it was discovered the government lock-up they attended for a briefing on proposed anti-terror legislation was light on information and heavy on restrictions. 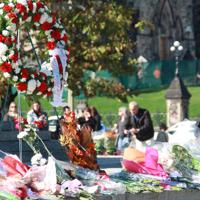 Why We Need to Resist Quick-Fix Anti-Terrorism Laws

Journalists were corralled in a so-called lock-up to hear details of the new proposed law. Media lock-ups are frequently used to provide journalists with extra time to pore over information on a complicated subject, such as a budget. The reporters can't publish their pieces until a set time, usually when the government announcement becomes official.

The idea is that when the government unveils the news, the public will have instant access to the finer points of whatever is being released.

That was the case Friday when reporters were told they could sign an embargo and listen to a briefing of Bill C-51, hosted by Public Safety Canada and the Department of Justice.

The bill was expected to have controversial new powers -- such as lower thresholds for arresting suspected terrorists -- for law enforcement in the name of protecting Canadians.

''The media lock-up will start at 11:00 A.M. until the designated Public Safety Canada official announces that the embargo is lifted, at approximately 12:30 P.M.,'' said a Thursday release to the parliamentary press corps from the minister of Public Safety and Emergency Preparedness.

''Once the lock-up has commenced, no one will be allowed to leave the room or contact their office until the embargo is lifted.''

Bills are usually given to reporters in a lock-up before they are tabled in Parliament. A copy of the new Anti-Terrorism Act is what most members of the press were expecting Friday.

No bill to view

But when more than two dozen reporters arrived at the briefing in Ottawa, they were told they would not be getting a look at the bill, even before the question-and-answer portion of the technical briefing.

President of the Parliamentary Press Gallery Laura Payton took up the cause and at the back of the room argued with government staffers, questioning the point of having reporters sign an undertaking when they weren't even being given sensitive information, just backgrounders. The backgrounders detailed little information the reporters didn't already suspect would be in the new legislation.

The staffer insisted to Payton reporters weren't actually in a lock-up, but merely signed an undertaking to observe an embargo on disseminating information from the backgrounders until the embargo was lifted.

The Tyee is withholding the staff member's name in accordance with the undertaking's stipulation not to attribute information to government employees at the event.

The briefing, referred to three times as a ''lock-up'' by another government staff member in his opening remarks, then began.

The minor grumblings about the lack of information that had been moving around the room suddenly matured into outright dissent.

''Can you give us an explanation for why you would hold a briefing and not give us the legislation at the beginning?'' boomed one reporter.

''We'd be happy to take your questions on the substance of the information,'' replied a frazzled bureaucrat attempting to maintain a social veneer.

He was then interrupted by another salvo of displeasure.

''We don't have any information,'' they said. ''We haven't even had time to read the backgrounders!'' and ''Give us the bill!'' were shouted by reporters on chairs circling the room.

The shouting and sarcastic remarks continued -- at one point it seemed a walkout was close to happening. Renewed demands from one corner of the room or another to see the bill were called out as staffers went on with their briefing.

''Are you filming us?'' a CBC reporter asked in disbelief to a staffer who appeared to be using a phone to record the discontent. The undertaking signed by media specifically said there was to be no filming in the room.

About 15 minutes later, Stephen Harper's director of communications, Jason MacDonald, arrived and sat down, promptly thumbing away on his phone. The undertaking the journalists signed also forbid the use of cell phones to ''release or communicate documents, materials or information, or other records of any nature whatsoever to anyone in any manner'' during the embargo.

Staffers described to journalists Bill C-51 and how it makes it an indictable offense to advocate and promote terror, to preventative arrests and expanding the powers of the Canadian Security Intelligence Service.

The bulk of reporters' questions were on how the bill makes it an indictable offense to knowingly advocate or promote terrorism offences ''in general,'' which could mean people who post propaganda on social media are subject to arrest.

During the question-and-answer period, reporters asked how the government would decide who is supporting terrorism. Stephen Maher from Postmedia asked if someone would be breaking the law if they posted material encouraging attacks by Ukrainian militants on Russian targets in Crimea.

The row of bureaucrats at the front of the room said they wouldn't speculate on hypothetical situations. Many answers seemed scripted to the point where one reporter asked if they were just reading parts of the backgrounder as their answers. The staffer replied that they weren't.

A little after 12 p.m., the bill was given to reporters.

Half an hour later, the embargo was lifted and reporters were told they could expect a text message with a wireless code so they could file their stories. But the wireless did not immediately work.

Meanwhile, a massive white screen lowered from the ceiling behind two Canadian flags. A six-metre-tall Stephen Harper was projected onto it as he gave a speech to introduce the new anti-terror legislation live in Richmond Hill, Ontario.

The prime minister talked about a growing ''great evil'' Canadians need to be scared of in the form of violent jihadists wanting to kill anyone ''who does not share their narrow and oppressive world view.''

Meanwhile, reporters pleaded with government staffers to get the wireless working so they could get their stories -- cobbled quickly from what information they were given -- to the public.

Payton said she left after 15 minutes of waiting for the wireless to work and doesn't know if it ever came on.