A Conservative MP has tabled a private member's bill that would require manufacturers to put warning labels on the outside packaging of cellphones and other electronic devices. 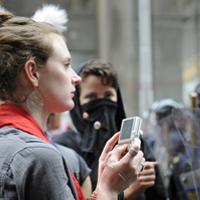 Police Departments Won't Say if They Use Cellphone ID Tech

Oakville MP Terence Young tabled Bill C-648, or the Warning Labels for Radio Apparatus Act, last December just before the Christmas break. Young was behind another private member's bill known as Vanessa's Law, which toughened regulations for the reporting of adverse reactions to therapeutic drugs. That bill became law in December.

If passed, Young's new bill would force manufacturers to place warnings on cellphone packaging, telling users that radio frequencies emitted from some electronic devices could pose a health threat. There are approximately 28.5 million wireless subscribers in Canada, according to the Canadian Wireless Telecommunications Association.

The health effects of cellphone use have been the subjects of many studies, and the results are varied. The U.S.-based National Cancer Institute has said the risk is not high.

Its website on cellphone safety says cellphones emit radiofrequency energy, a form of non-ionizing electromagnetic radiation that can be absorbed by human tissues closest to where the phone is held. It says no evidence exists to show that type of radiation is harmful.

In the past, however, the World Health Organization's International Agency for Research on Cancer has warned of the health threat cellphones can pose, Young said.

According to the WHO's website, the International Agency for Research on Cancer coordinated the largest retrospective case-control study to date to determine if there are links between the use of cellphones and head and neck cancers in adults.

The agency classified radiofrequency electromagnetic fields from cellphone use as possibly carcinogenic to humans, giving it a Group 2B category, which is used "when a causal association is considered credible, but when chance, bias or confounding cannot be ruled out with reasonable confidence."

Young said the WHO research shows mounting evidence that radio waves can be hazardous to the health of users of certain electronic devices.

"There are many documented cases of brain cancers from people who use cell phones against their head, like, 50 calls a day for 10 years," Young said. "That's why the WHO has raised the issue."

Another study, released last November by a Swedish university, concluded that radio frequencies are carcinogenic long-term and should therefore be reclassified. The paper used two case-controlled studies for its report. One study group was from 1997 to 2003, and another from 2007 to 2009.

The findings suggest glioma, a broad category of brain or spinal tumours, and acoustic neuroma, a non-cancerous ear tumour, are caused by radio waves.

"We concluded that glioma and also acoustic neuroma are caused by RF-EMF emissions from wireless phones, and thus regarded as carcinogenic… indicating that current guidelines for exposure should be urgently revised," the study said.

Bill C-648 would require manufacturers to place warning labels on any "radio apparatus," including baby monitors, cellphones and cordless phones.

Industry representatives are opposed to the bill and argue that the radio frequencies emitted by the electronic devices named in the bill are well below Health Canada standards.

The Canadian Wireless Telecommunications Association's director of communications, Marc Choma, said there are thousands of studies on the subject, with vastly different conclusions.

The association represents 100 companies in the industry including carriers and manufacturers.

Choma said the WHO's warning designation on electronic devices means there should be further study, and pointed out coffee is also under the same classification.

"I haven't heard any international calls for warning labels on coffee," he said.

He argued credible science has found no conclusive evidence the radio frequencies are a risk.

Choma said if the bill looks like it has a chance at passing, his group would speak against putting the warnings on the packaging.

"If there is no evidence a product causes adverse health effects, why would you put a warning on it?" he asked.

Currently, electronic devices come with advice booklets inside the boxes.

Young said he wants the law to require manufacturers to put the advice that is now provided in booklets on the outside of the boxes instead.

He said one of the warnings these booklets now provide is to keep cellphones 25 millimetres away from the body.

He said there may not be any evidence now, but he is confident that one day it will be shown that cell phones do cause cancer.