[Editor's note: This piece first appeared in Indian Country Today Media Network, and The Tyee republishes it here with permission.]

Among other landmarks in a significant year for Indigenous Peoples in Canada, the Supreme Court ruled in favour of a First Nation's title to its land and the Assembly of First Nations (AFN) National Chief resigned. Overall, 2014 was marked by victories, as major suits were decided in Indigenous Peoples' favour and various governments rejected destructive mining proposals -- though the continuing, and unaddressed, issue of missing and murdered aboriginal women remained at the forefront as well. 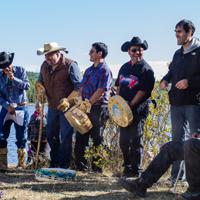 What was probably the biggest Native news of the year took place about halfway through the calendar, when the Supreme Court of Canada radically altered the way land claims and treaties would be viewed. In an unprecedented move, the court granted aboriginal title to the Tsilhqot'in of more than 1,750 square kilometres of territory. The wide-ranging ruling has implications for everything from pipelines to sovereignty, according to experts. That is because the ruling formally acknowledged that Indigenous Peoples can claim occupancy and control over vast tracts of land beyond the settlement sites to which they have been relegated.

Calls continued for a national inquiry into why indigenous women meet more often with violence, often fatal. A report by the Royal Canadian Mounted Police in May brought stark attention to the issue with its count of more than 1,200 missing or murdered indigenous women in the country, a figure that dwarfed statistics compiled previously by advocates. Before that, the murder of 26-year-old, pregnant First Nation graduate student Loretta Saunders, who was researching that very topic for her thesis when she went missing in Nova Scotia in February, broke hearts and drew national attention to the issue. The problem was further highlighted by separate attacks on two First Nation teenagers in Winnipeg -- 15-year-old Tina Fontaine, whose body was pulled from the Red River after she ran away from a foster home, and 16-year-old Rinelle Harper, who survived a brutal assault not long after that and emerged from the hospital calling for a national inquiry into the issue. Prime Minister Stephen Harper drew broad criticism just before Christmas when he told CBC host Peter Mansbridge, "it isn't really high on our radar, to be honest."

In May, Assembly of First Nations National Chief Shawn A-in-chut Atleo stepped down in the middle of a second term that he had squeaked by to win, citing conflict over the First Nations Education Act. The resignation led to a debate over whether the AFN was relevant any more, so estranged had it become from the grassroots. On Dec. 10, Federation of Saskatchewan Indian Nations (FSIN) Chief Perry Bellegarde was elected as the new National Chief.

The Métis, the third aboriginal group formally recognized in Canada besides First Nations and the Inuit, won a decisive court victory with implications as far-reaching in their way as the Tsilhqot'in ruling. The April 16 ruling gave Métis and other non-status Indians -- those not enrolled as members of specific First Nations -- aboriginal status under the Indian Act. In rejecting Ottawa's appeal to overturn a landmark 2013 decision from a case that was originally filed in 1999, the federal court of appeals said the federal government is obligated to extend the same social services to those groups as it does to Inuit and First Nations citizens.

Enbridge Inc.'s plans to build a pipeline through pristine British Columbia First Nations territory continued to run into obstacles as Prime Minister Stephen Harper's June approval -- albeit with conditions -- of the $7.9 billion project united many groups in opposition, with legal action.

Kinder Morgan's proposed tripling of its pipeline capacity between the Alberta oil sands and the B.C. coast has united tribes on both sides of the U.S. Canada border and spawned protests on Burnaby Mountain, where more than 100 people have been arrested. In the end, those opposed -- which included not only First Nations but also Burnaby Mayor Derek Corrigan -- won a court victory, with Kinder Morgan and its testing equipment ordered off the mountain. But the company has vowed to press on with its plans.

The year kicked off with a controversy over the attire of eighth-grader Tenelle Starr, of Star Blanket Cree Nation in Saskatchewan, who wore a magenta hoodie proclaiming, "Got Land? Thank an Indian." School officials were not amused, and sent her home. A public outcry ensued, and she won the right to wear the hoodie anywhere. Meanwhile, orders for that and other "Got Land?" items skyrocketed.

In February, Ottawa finally rejected yet another proposal from Taseko Mines Ltd. that would have decimated pristine habitat and sacred Tsilhqot'in lands to extract gold and copper from a British Columbia wilderness. It was the third rejection of what the AFN had dubbed the worst mine proposal ever, after an environmental assessment that even industry-friendly Prime Minister Stephen Harper had called "very damning." Undeterred -- or unable to take a hint -- Taseko sued. 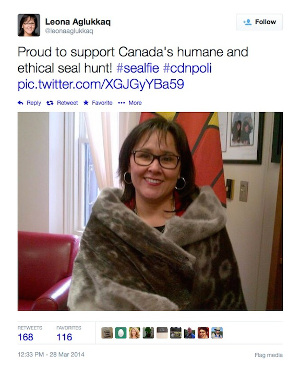 The Inuit were outraged when the European Union banned the sale of seal products, saying that the move undercut the market so severely as to threaten their way of life.

But the rage boiled over when Academy Awards host Ellen DeGeneres donated some charity money gathered with the A-list selfie that "broke Twitter" to an international organization that opposes the seal hunt. In response, they took pictures of themselves wearing seal products, posing with dead seals and chowing down on seal.

In August, a tailings pond dam burst at a mine outside the town of Likely, British Columbia, sending four billion gallons of mining waste into pristine B.C. waterways. The incident drew comparisons with the notorious Exxon Valdez oil spill. The mining company's chief executive's assertion that he would have no problem drinking the water from the rivers the waste had flowed into was met with derision.

Beyond damage to the watershed, the disaster led neighbouring First Nations to eject the owner, Imperial Metals, from another mining site. And in neighbouring Alaska, Native Alaskans and others -- afraid of what they saw as lax regulation -- requested that the British Columbia government tighten its rules.

The fate of one of the largest tracts of undisturbed wilderness in the world hung in the balance for much of the year as a lawsuit against the government of Yukon for opening its vast Peel Watershed up to potential mining operations wound its way through the courts. First Nations, environmentalists and others who wished to preserve the wildlife habitat and fishing industry in the remote region had sued the territorial government for scrapping a carefully developed plan for the watershed; a new administration had substituted another plan that opened up much more of the sensitive area to development. In what observers called a precedent-setting ruling, the court told the Yukon government to return to the consultation stage, using the agreed-upon plan as a starting point.