British Columbia Auditor General Carol Bellringer raised eyebrows earlier this month when she pointed out that the province has extended more than $1 billion in tax credits to natural gas companies over the past two years. 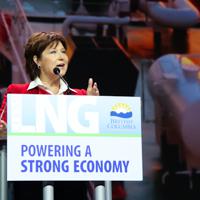 Tax Breaks for BC Frackers Reach over $1 Billion

But amid all the discussion of liquefied natural gas tax rates, industry tax credits and potential gas revenues, one figure is conspicuously absent. "Government take" is a key consideration for industry in any investment decision. How much of the profit from the sale of natural gas does a government take?

Unfortunately, the B.C. Ministry of Natural Gas Development could not provide the provincial revenues as a percentage of the net revenues from gas sales. So we asked the current leader in natural gas production in Canada. But Alberta Energy couldn’t provide that figure, either.

However, a 2009 report prepared for Alberta Energy by PriceWaterhouseCoopers did look at fiscal regimes around the world. It compared the total "government take," as well as political climate, geography, ease of extraction and other factors.

The report found that the U.S., the Middle East, China, Indonesia, Kazakhstan, Norway and Russia all had a higher government take than Alberta.

It also noted, however, that recent efforts by Alaska, Alberta, Russia and Nigeria to increase their percentage of natural gas revenue resulted in immediate reductions in investment.

Marc Lee, a senior economist with Canadian Centre for Policy Alternatives and the co-director of the Climate Justice Project, said the B.C. regime is not intended to maximize the return for British Columbians, who own the resource. ''It's designed to share risk with the private sector in developing that resource,'' he said.

Lee said very little of the price of LNG in Asia will come back to British Columbians. ''If I sold your car for you and I sold it for $10,000, what share would be fair for you to get?

In June 2011, a report by the New West Partnership (the economic agreement between B.C., Alberta and Saskatchewan) compared oil and gas fiscal regimes across Western Canada.

The report found that B.C.'s royalty rates range between 12 and 27 per cent, before tax credits. Alberta's rate is as low as five per cent, depending on production levels and price.

Royalty regimes are a delicate balance. Too high, and investors choose other jurisdictions. Too low, and the Crown loses out on revenues for a non-renewable natural resource.

There are currently 18 liquefied natural gas proposals at various stages of development in B.C. If five plants are constructed by 2024, it would result in a total projected investment of $175 billion, he said, creating long-term jobs in the north.