Only metres offshore, black plumes of smoke billow in the heart of Vancouver's English Bay from two purple-tinged oil slicks, set ablaze and barely contained within rings of buoys next to a grounded oil tanker. 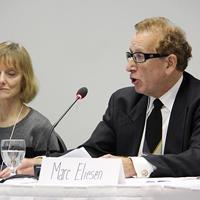 Peering at the sinking ship through a set of Seawall-mounted binoculars, two young women tourists gasp audibly as they rotate the viewfinder towards shore to see a dead and bloated orca washed onto the popular West End beach, now covered in grease blobs and dead fish.

Of course, there's no beached whale, flaming bitumen spill or oil tanker sunk in the Burrard Inlet. In reality, on the wind-chilled beach a young boy draws in the sand, and two kayakers paddle through the dark blue waters.

The binoculars are "guerrilla art" commissioned by the Dogwood Initiative, an environmental group, and Rethink Marketing, the PR firm behind Molson's Canadian passport-activated free beer fridges at the Sochi Olympics.

Installed today only, overlooking English Bay at the southwest end of Bidwell Street, the binoculars imitate the mounted scopes often found at tourist attractions and scenic lookouts. Rethink's version uses computer graphics to create a panoramic, virtual reality version of what environmental campaigners fear could happen if an oil tanker permitted through the inlet runs aground.

"A picture is worth a thousand words," said Dogwood Initiative's energy and democracy director Kai Nagata in an interview beside the binocular contraption. "And a 3-D virtual reality tour is worth a few more than that."

(Nagata, a former CTV journalist, contributed articles and opinion columns to The Tyee from 2011 until June this year).

Most people have a tough time imagining disaster scenarios, Nagata said. "We wanted to bring it home, and give people a little flavour of what this could look like here in our city."

The proposed $5.4-billion TransMountain pipeline expansion from Alberta's oilsands through the Lower Mainland would nearly triple the existing pipeline's flow of diluted bitumen from 300,000 to 890,000 barrels every day.* It would also boost the number of oil tankers in the area from 60 up to 408 annually.

*Kinder Morgan Canada refused several Tyee interview requests Monday, but in a teleconference with reporters Wednesday, president Ian Anderson said the firm accepts the fact that increasing tanker traffic and pipeline flow will "come with risks," but said that it's the proponents' job "to ensure those risks are as low as possible and can be managed properly."

Anderson addressed municipal concerns about accident cleanup costs, citing a 2007 spill when Kinder Morgan oil gushed into a Burnaby neighbourhood after a city worker ruptured the existing pipeline. Cities would not have to pay for an accident, he pledged, unless caused by a "third party." He did not elaborate on what constitutes a third party.

"We would cover and provide for all cleanup costs necessary in the event of an incident," he vowed. Anderson admitted "not everybody supports this project," saying protests are welcome as long as they don't interfere with his employees' work.

"I have faced supporters, I have faced protesters, I have met many people who do not want this project to proceed," he said. "I believe and know that we've made our project better as a result."*

Pipelines are a hot issue in several municipal election campaigns across the province, not only in Vancouver.

Although the elections are top of mind for Nagata, he said the aim of the installation is "to show people what's at stake" in the longer term as well.

"As voters, people feel like these projects are inevitable and they have no control over them," he said. "We don't believe that's the case at all."

Dogwood Initiative states that it is "non-partisan" and consequently does not endorse particular candidates or parties. However, an election website launched by the organization ranks political hopefuls based on an environmental survey it sent to candidates.

Burnaby Mayor Derek Corrigan has spoken out repeatedly against the Kinder Morgan expansion, and that city's fight against TransMountain's surveyors and preparatory work is currently before the courts.

As the Nov. 15 election campaign has unfurled, Kinder Morgan faced scrutiny from Elections BC about a marketing campaign involving television commercials and glossy mailouts to voters throughout the region touting its project.

New Democrat MP Kennedy Stewart (Burnaby-Douglas riding) lodged a formal complaint last month alleging the company was violating third-party election advertising laws because it was not a registered third party, according to the Burnaby Now.

Elections BC, which regulates both municipal and provincial elections, dismissed the complaint because the company did not specifically refer to political candidates or parties.

According to public records, Dogwood Initiative is a registered as a third-party "sponsor" in the 2014 municipal elections across the province. Kai Nagata said the organization approached Elections BC this summer and was advised to register and disclose its election spending "to be on the right side of the law."

"What was pretty galling was to see Kinder Morgan roll out their multimillion-dollar voter contact campaign timed to coincide exactly with the municipal election," he added, "and then argue that this was not an issue of municipal jurisdiction therefore it couldn't be a municipal election issue." -- David P. Ball

Vancouver's city council has voted to oppose the pipeline-twinning proposal, and successfully applied to be an intervenor at the National Energy Board which is reviewing the project.

But for Non-Partisan Association councillor Elizabeth Ball, Vision Vancouver is "wasting a lot of time" coming out against the proposal before the board has made its decision on whether the project can even proceed. "All the numbers are extrapolated beyond reality. The worst thing you can do is to create hysteria," she said.

Pipelines are regulated by the federal government, not municipalities which don't have legal jurisdiction over pipeline or marine traffic approval processes.

"Realistically, the only thing that a city can do about something close to it is to write a letter, or make a visit and say, 'This is how we feel,'" she said. "It's very disingenuous to tell people you can do something about this beyond those things."

Vision Vancouver councillor Geoff Meggs disagrees, arguing that his administration's "greenest city" ambitions would be "nullified" if Kinder Morgan gets a green light.

"We're trying to take important steps at the municipal level within our jurisdiction," Meggs said. "[The NPA] is turning a blind eye to an issue that's not only facing our city, but the planet. We just simply can't keep our fingers crossed and hope Victoria and Ottawa get it right."

The Coalition of Progressive Electors shares Vision Vancouver's opposition to Kinder Morgan's pipeline and tanker traffic expansion. But the party is calling for the city to go even further -- to hold a referendum to see if residents would support an outright ban on oil tankers in the Burrard Inlet, including the five tankers already plying its waters every month.

"If you are opposing tankers, then demonstrate your opposition," said Lisa Barrett, who is running for a council seat with COPE, when asked about Vision's stance. "I'd like to see something a little more vigorous -- I'd like to talk about the risk of those 40 tankers already going though our waters."

"I personally didn't see a need for a referendum," Meggs explained when asked about that vote. "The views of the public are very clear."