When Brittany Bell graduated with an education degree from the University of British Columbia's Okanagan campus in 2011, she wanted to be a teacher just like her mom. 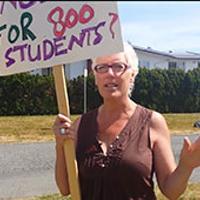 What followed graduation was a year of trying, and failing, to get a teaching gig in the Southern Interior. Feeling pressure to volunteer as a basketball coach or homework club tutor, Bell felt she couldn't compete with more experienced teachers while still holding a full-time job to pay her bills.

There are roughly 3,300 certified teachers for 900 teaching jobs in the province every year. That's about three teachers for every job. With so many grads, and so few jobs, where are new teachers turning?

After a year in the Okanagan, Bell moved to Vancouver expecting better luck. Instead, she fell into a tutoring job with Brain Boost Education.

Brain Boost was "delighted" that Bell didn't have any public school teaching experience. "Their philosophy is one-on-one tutoring sessions and it's not a classroom situation, so it's very different than the public school philosophy," she said.

Two years later, Bell is still tutoring at Brain Boost. It's engaging and challenging enough to make her think twice about renewing her efforts to get into the public school system.

According to those who train teachers in the province, there are other options for out-of-work teachers, too. B.C. still has a shortage of specialized teachers such as French immersion or special needs, for example, while other grads are finding their teaching skills lead to jobs outside the classroom or even overseas.

While some wonder whether B.C. should reduce its number of teacher education seats -- as Ontario announced it would do last year -- or cut down on the number of programs, E. Wayne Ross, a professor in the University of British Columbia's Department of Pedagogy and Curriculum, said the problem isn't new.

There were too many teachers when he was a student in the University of North Carolina's education program over 40 years ago, too.

"If people are very interested in teaching, then why shouldn't that demand be met?" he asked.

In conjunction with the Ministry of Advanced Education, the universities set teacher education student quotas. In the 1990s the quotas were higher, said Wendy Carr, director of UBC's teacher education program. That's because the ministry asked UBC, the University of Victoria, and Simon Fraser University to help fill a teacher shortage in the province by training more teachers.

Since there is no longer a shortage -- partially because the number of teaching positions was reduced when the provincial government stripped class size limits and the ratio of specialist teachers to students from teacher contracts -- the student quotas dropped from a peak of 1,200 students to 600 at UBC today.

"Candidates, in the feedback that they give us, [say] they're looking at reputation, number one, location, number two, and either family or personal history with that institution," said UBC's Carr about why students choose their program.

There is still a shortage of certain kinds of teachers in the province, particularly those specializing in subjects like physics, music, and math, as well as French immersion and special needs teachers. The biggest oversupply is teachers who specialize in the humanities, including social studies and English.

The government will cut $50 million from post-secondary education over three years beginning 2012/13, and universities are increasingly reliant on tuition money. Reducing student seats because of job prospects has to be weighed against whether schools need the money.

Sandra Bruneau, executive director of the Association of BC Education Deans, warns against concluding that we train too many teachers by comparing the number of teaching grads to the jobs available.

Graduates from the University of Northern British Columbia's teacher education program typically get teaching jobs in Canada's north, she said, while UBC's West Kootenay grads tend to be hired on in the area's four school districts.

Smaller programs like Trinity Western, UBC Okanagan, University of the Fraser Valley, and Thompson Rivers University have some of the highest employment rates for graduates, she said. But not all grads become schoolteachers.

"The UBC education program in Vancouver, for example, prepares teachers for positions other than K-12 teaching," Bruneau said, like offering teaching practicums in museums and community centres.

The grad numbers don't include teachers coming to B.C. from other regions. In the first six months of 2014, the BC Teacher Regulation Branch granted 1,413 teaching certificates. Although the branch doesn't specify where these teachers come from, Bruneau said they're not all from B.C.

Kris Lidstrom is one such teacher. He was a high school and middle school teacher in California before he moved to Alberta in 2008, where he taught adult education part time and supplemented his income with tutoring.

In 2009, Lidstrom moved to Vancouver where he applied for continuing education jobs with the Vancouver School District, but never heard back. Today, with the help of his wife's income, he makes ends meet tutoring students in math, calculus, and test preparation for U.S. post-secondary entrance exams.

"When I was in teaching school, I did a little bit of tutoring," he said, but "from what I can tell, there's more tutoring opportunities in Canada than there are in California."

But the pay and the number of jobs was better in Edmonton, which he believes is due to the lower cost of living than Vancouver.

Still, he doesn't like teaching kids in a classroom setting, preferring one-on-one instruction or teaching adults. Lidstrom is considering applying for teaching jobs all over the Lower Mainland, but he's also thinking about going back to school to find a different line of work.

For those who can't or don't want to teach in B.C., there are plenty of teaching jobs overseas, Bruneau notes, particularly in East Asia.

You don't need a teaching degree to teach English overseas. While B.C. has several overseas schools hiring B.C.-certified teachers only, the majority of English as a second language schools don't require certification.

Plus, Ross notes, teaching overseas is what many students do before a teaching degree.

"I have two [bachelor of education] classes that I'm teaching this fall," he said, "and probably one-quarter of students previously had experience outside of Canada teaching English as a second language."

Some of those overseas teachers come back to B.C. and find teaching jobs. But even if you're lucky enough to find a teaching position in the province, depending on your salary level, the cost of living, or even your personal debt you might still have to supplement that job with tutoring.

Looking for a Grade 10 math tutor for his son a few years ago, Ross remembers a friend recommending a teacher who tutored on the side. But he was booked solid: "[He said] ‘I do my job and I'm already maxed out on my tutoring, so I can't do anything for you.'"