Did Canada's foreign policy play a part in the deadly shootings that shut down Parliament Hill this morning? One soldier was shot and killed at the National War Memorial before another shooting took place inside the Parliament buildings themselves. 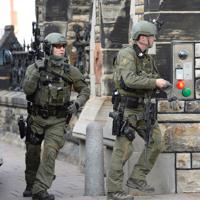 Soldier Shot on Parliament Hill, Multiple Shooters May Be Involved

It may be too early to say if terrorism is involved. But officials have reportedly confirmed that the suspected gunman, Michael Zehaf-Bibeau, is known to Canadian authorities. Sources told the Globe and Mail he was recently designated "high-risk," with his passport seized.

Today's attack occurred two days after a man ran over two soldiers, killing one, near Montreal. The Prime Minister's Office said the suspect in that incident, Martin Couture-Rouleau, had recently become "radicalized" and his passport had similarly been seized.

Given that, The Tyee asked various political commentators about their views on today's news. Here's what they had to say.

Jeff Newton: Like it or not, we need to improve security

Even if foreign policy doesn't change, journalist and producer Jeff Newton of the news program 60 Minutes said security measures will have to.

Newton has been covering terrorism for years and, over the phone from New York, told The Tyee such an attack on Canada was something "you could see coming" because of weaker security measures making the country a soft target.

He said Wednesday's attack will force Canada to think about security in a new way and increase the presence of armed security forces in places like Parliament Hill so would be-attackers would have to spend more time and plan more to pull off an assault.

Newton, who is a dual citizen of Canada and the U.S., said he realizes many Canadians may not want that kind of a presence, but said it's not simply up to them.

He said organizations like Islamic State have realized it's much easier to attack western soldiers on western soil because there are fewer barriers.

Canada will need to spend more money on policing in malls and government buildings, he said.

Ottawa Citizen columnist Terry Glavin said some surveillance upgrade is needed, but it needs to be directed in the right places.

Glavin said the focus will begin to shift onto the Muslim community in general, but that greater attention needs to be paid to "psychopaths" who are drawn to violent terror groups.

He said as early as Wednesday afternoon media was conflating peaceful followers of Islam and "Islamic crackpottery," pointing out that people who are joining Islamic terror groups groups are recent converts.

"The authorities in Canada, the police authorities haven't been watching closely enough for the lunatics that tend to gravitate towards Islamic fanaticism," he said.

What's needed, Glavin said, is civilized conversation about how to deal with the problem and not allow such an event to dictate foreign or internal policy.

Journalist and former board member of the Canadian Centre for Policy Alternatives Murray Dobbin said he found this morning's attack to be stomach turning, and questioned if Ottawa's current foreign policy may be to blame.*

Today's attack should not come as a surprise considering Canada's decision to join the fight against Islamic State in Syria and Iraq, he added.

"We say that ISIS is a threat, but... we don't really listen to them," he said. "They said, 'If you're going to bomb us, you're not going to sleep well at night.' That is essentially what this attack has accomplished."

He said he fears the government will now use the attacks to its advantage by perhaps increasing surveillance on all groups and giving more resources to CSIS and the RCMP to monitor them.

"It has a chilling effect on dissent in general," he said. "(It) goes beyond just the threat of terrorism."

*Story corrected Oct. 23 at 1:15 p.m. A previous version of this article incorrectly described Murray Dobbin as the former head of the Canadian Centre for Policy Alternatives. He is a former CCPA board member and researcher.