On a Friday afternoon in Vancouver's Victory Square park, a dozen or so tents, tables and booths are filled with lawyers in suits and ties listening to clients of many backgrounds, binders of documents at the handy. The park is filled with the quiet murmur of phrases such as "wrongful dismissal," "family court," "dispute resolution" and "small claims." 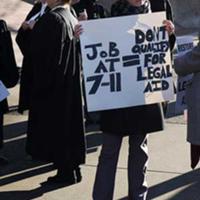 A row of chairs is half-full of people clutching paper tickets, waiting for their chance for counsel.

"The public needs to see that legal services are accessible to everyone in the community, and not just for those who can afford the large firms' fees of $500 an hour," said criminal defence lawyer Esther Kornfeld, as she prepared to see her next client in one tent.

Kornfeld is one of more than 100 lawyers across the province who are taking their free legal services to the streets this month.

Organizers of the Pro Bono Going Public events say the services are intended for low-income people who face barriers in dealing with their legal troubles. The events started in Vancouver's Downtown Eastside last week and will soon be available in four other B.C. cities: Surrey, Victoria, Kelowna and Kamloops.

For many of the lawyers involved, the events are intended to convey a deeper message for the provincial government. It's now been 12 years since major reductions were made to legal aid in B.C., starting with a dramatic 39 per cent between 2002 and 2004.

"Legal aid funding is very difficult to get in this province," said Martin Taylor, a former judge in the B.C. Court of Appeal throughout the 1980s and early '90s. "The government has a responsibility there, though what they should do is a matter of opinion. They should be making every effort to assist people in having access to resolution of their legal problems, just like having access to health care, unemployment and being able to survive in old age."

Organizer Jamie Maclaren said the "advice-a-thon" is a chance for lawyers to do their part in helping those without means access an often opaque and complex justice system.

"It's been underfunded for years and years," Maclaren, also executive director of the Access Pro Bono Society of B.C., said of legal aid. "We're trying to exert a bit of pressure, in an indirect way, to the provincial government to rise to the occasion and fund legal aid to the extent it ought to."

Restoring legal aid access to 2002 levels would require a $50-million-a-year injection, according to a 2011 report commissioned by Public Commission on Legal Aid, a project of the Canadian Bar Association, Law Society of B.C., Law Foundation of B.C., B.C. Crown Counsel Association and local bar associations.

Not sure of the options

One of several hundred clients seeking legal assistance identified herself as Swampy, a Cree and Mohawk woman who has been involved in the neighbourhood's latest tent city in Oppenheimer Park. The tent city sprang up earlier this summer in protest of increasing homelessness and substandard conditions in single resident occupancy hotels in the city.

Swampy came to Pro Bono Going Public on behalf of two tent city residents, both with disabilities, who had "suffered injustices in the system" but were not sure of their options.

"It's really important to be here today and get him some legal advice from a criminal lawyer," she said. "Quite a few of [homeless people] are illiterate, others can't see, they don't have money for the bus or cellphones. A lot of these people don't know they can get help if they are a victim -- it's fight or flight when they're getting attacked."

B.C.'s Justice Ministry denies the system is inaccessible, pointing to this year's $2-million boost in funding to the Legal Services Society, which administers legal aid in the province. That tops up provincial funding to nearly $75 million annually.

"Government recognizes the importance of supporting legal aid for low-income British Columbians," a spokeswoman who refused to be named said in an emailed statement. The additional $2 million, she said, is targeted at five new family and criminal justice pilot projects which aim to "increase access to high-quality, legal services" for those in need, she explained.

The spokeswoman pointed to Statistics Canada data from earlier this year suggesting that B.C.'s level of legal aid funding has kept pace with the Canadian average of roughly three per cent a year.

BC justice 'in a transitional phase': former judge

Lawyers like Kornfeld, however, say the government has repeatedly blown the opportunity to effectively fund access to justice. "We've been let down so many times by attorney generals that are very well aware of the situation of the courts and of legal aid lawyers," Kornfeld said.

Former justice Taylor believes B.C. is "in a transitional phase" when it comes to access to the justice system, in spite of calls for restored legal aid funding. But when it comes to other ways to help people resolve their legal troubles, he sees a lot of hope.

B.C., for instance, is one of the only provinces to publish its court records and dockets online, unlike Ontario where only court dates are newly available but not documents.

"In the future, people will be able to get a lot more legal advice and a lot more help in settling their problems through electronic means -- the Internet," he said.

Such advancements will help people stay out of court, which can be time-consuming and stressful, he said. "The court is a last result for people who are unable to address their disputes in any other way."

Asked about any new initiatives on that front, the Justice Ministry spokeswoman said the province hopes to use new technologies to "connect clients to resources" and heighten access to legal advice.

"We believe that this will lead to a more accessible and sustainable justice system," she said.