Before he left his post as chief executive officer of the BC Public School Employers' Association in 2013, Hugh Finlayson added to the fine B.C. tradition of making recommendations to fix teacher bargaining. 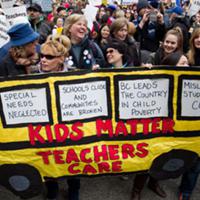 Updated: Everything You Need to Know about BC Teacher Bargaining

Before him had come the 1987 Royal Commission on Education, the 1993 Commission of Inquiry into the Public Service and Public Sector, the 2003 Don Wright report, and the 2007 Vince Ready report. Few of those reports' recommendations had been adopted, and teacher collective bargaining in 2011-12 had been protracted and brutal, ending only when government legislated teachers back to bargaining table and threatened fines if they went on strike.

But unlike his predecessors, Finlayson didn't declare bargaining broken. Rather his report -- broken into three parts -- set out to start a "reasoned informed discussion" on teacher bargaining.

"If the capacity, ability or willingness does not exist to make meaningful change, there's the potential that a worse bargaining dynamic will result," he wrote.

"Let's figure out how to make wise choices."

Those wise choices have yet to be made and today teachers and the BC Public School Employers Association have been negotiating for over 18 months, with teachers engaged in escalating strike action for close to four months and employers responding with a partial lockout. Yet they're still too far apart for a mediator to help them reach a deal.

During the 2012 bargaining stalemate The Tyee asked former BC Teachers' Federation presidents how they would change bargaining. This time The Tyee Solutions Society reached out to a policy researcher, trustees, and even a historian to talk about their opinions on the health of teacher bargaining, and where both sides can and should go from here.

So is the process broken? The jury, just like school, is out.

John Malcolmson hasn't worked for the BC Teachers' Federation for 20 years, but the former research analyst in the union's bargaining division has kept his eye on teacher contract negotiations since he left. He's observed over the years that no matter how teachers bargain with their employers, there's always one side that comes out on top.

When Malcolmson started at the union in 1982, teachers bargained locally with their 75 school districts for one-year contracts.

Unlike all other trade unions in B.C., teachers bargained under the School Act instead of the provincial Labour Code. Negotiations were limited to wages and benefits, and if bargaining, which began in January, failed to reach a contract by November compulsory arbitration would take over. Striking was out of the question.

Then in 1987 Social Credit Premier Bill Vander Zalm changed the bargaining structure so teachers' could bargain under the labour code like other trade unions, giving them the right to strike and dropping the mandatory arbitration.

Where the previous bargaining model didn't include teachers' working conditions, how they were evaluated, or the right to strike if they were unhappy, the new system brought all those elements to the table.

"Teachers were successful in negotiating class size and class composition into their agreements," said Malcolmson. "Agreements grew substantially in that period, and teachers' got a taste of what it was like to have a direct role in negotiating their work conditions."

But Malcolmson believes local trustees felt "outgunned" in bargaining negotiations. Teachers, coached by their union in centralized bargaining methods, were better prepared for bargaining than school trustees, who Malcolmson says were under resourced in comparison. If teachers in one district got a sweet deal, union members in other districts could use it as leverage to achieve similar results.

Government also created a two-tier bargaining structure for teachers where some issues were negotiated provincially while others remained local.

"[The employers' association] could resource teacher employers to have a more coordinated system of how they bargain, to coordinate the distribution of resources, to allow government to have a clearer hand in determining bargaining," said Malcolmson, adding governments have been loath to give up control ever since.

Not surprisingly, the teachers union prefers to bargain locally, where the players involved have a stronger connection to the daily functioning of a public school. There have only been three negotiated contracts since this new bargaining formula was unveiled.

Malcolmson, who now works as a researcher for the national branch of the Canadian Union of Public Employees, believes the current model is broken because it clearly favours the employer, especially since 2002 when then-education minister Christy Clark used Bill 28 to strip teachers' contracts of class size, composition, and specialist teacher-to-student ratios, and teachers' right to negotiate them in future contracts.

'Broken assumes that something was working well': Denike

Ken Denike is one of the longest serving trustees in B.C. today, elected to the Vancouver School Board for the first time in 1984. He agrees with Malcolmson that bargaining from 1987-1994 did not go in the employers' favour. But he doesn't believe bargaining under the BC Public School Employers Association has been an improvement.

"Saying it's 'broken' assumes that something was working well and then it broke down," said Denike, who sat on the employers' association's board of directors from 1998 to 2013. "The whole system has really never meshed, in my experience."

Education historian Thomas Fleming chronicled the history of teacher-government relations in British Columbia from its 19th century beginnings until 2010 in his book Worlds Apart: British Columbia Schools, Politics, and Labour Relations Before and After 1972.

In it Fleming lays blame for the bargaining stalemate at the feet of the teachers, trustees, and government, but saves his harshest criticism for the teachers' union.

"[Compared to other province's teachers' unions] we have a very truculent union, and we have a union that believes it's entitled to make school policy, whether it has to do with class size or composition, and so on. So the union has always been remarkably ambitious," said Fleming, who also served as research director on the 1987 Royal Commission on Education.

Still he maintains just because the teachers and the government rarely achieve a negotiated contract settlement doesn't mean the system is broken. Like so many others have done recently, Fleming compares the situation to a marriage, saying just because some marriages fail doesn't mean marriage itself is broken.

"All relationships need a certain amount of trust and optimism at their core to go forward," he told The Tyee Solutions Society.

Kootenay Lake trustee Mel Joy sat as a director of the employers' association's from 2008 to 2013, serving as board chair from January 2011 until 2013. During her time as chair, Justice Susan Griffin ruled for the first time government stripping teacher contracts of class size, composition, and specialty teacher-to-student ratios under Bill 28 in 2002 was unconstitutional.

During the same time period a bargaining stalemate meant teachers engaged in a seven month administrative strike before government passed legislation banning strikes until a deal was reached.

Joy was the employers' public bargaining voice at the time, but earlier this year, shortly after Griffin ruled for the second time that stripping teachers of the right to bargain their working conditions was unconstitutional, Joy stunned the education community by publicly supporting Griffin's finding that government had not bargained "in good faith" during the 2012 teacher contract negotiations.

"Starting with essential service legislation, taking class size out of the scope of bargaining, two court cases and bad faith and dismantling of a bargaining structure the parties agreed on is the problem," she wrote in an email to The Tyee Solutions Society.

Change where the money comes from

Ending the current teachers' strike and bargaining stalemate is more important to Denike right now than restructuring bargaining. The government doesn't have to legislate to get there, he adds. They just need to wait the union out, even if that means classes don't start on time in September.

"It's unfortunate: the kids are suffering and parents don't know at this point what's going to happen coming back in September, and I really feel for those parents and those kids," he said.

That's where his sympathies end, however.

"[Government and teachers] are like two kids fighting under a blanket: it doesn't matter which one you whap," Denike said, adding both sides are entrenched in their own camps.

Both Malcolmson and Fleming want to see a change to the resources allocated to public education, but they approach the issue from different sides. Malcolmson wants government to stop forcing austerity on teachers and increase education funding.

"The system is frozen at this point because there's no resourcing to make it unstuck. We've been, in this province, under either funding freezes and minuscule increases for so long now and they've become entrenched as the norm that essentially it has bogged the system down to the point that it is completely unresponsive," he said.

How would government support these funding increases? By undoing the provincial income tax cuts it made early in the 2000s, Malcolmson suggests. But Fleming believes we should return to a model of education funding where property taxes go to local schools only. Then teachers and trustees would have a better idea of how much money they had to work with.

"You need a new financial structure so that those who demand services in schools have to actually pay for them. That you can't just roll this out of general revenues," he said, adding there should also be a top-up fund to help districts with smaller populations.

The bargaining structure is irrelevant, Joy notes, as long as the bargaining relationship remains a power struggle between two parties. That's not going to change any time soon if one party at the table has the power to stop negotiations and legislate a contract at any time.

She cites a recommendation from mediator Vince Ready's 2007 industrial inquiry report on teacher bargaining, which the union rejected at the time, calling for both sides to come together to set a bargaining framework before negotiations began. That's exactly what the union and the employers' association did before they started bargaining in Feb. 2013.

"This in itself was proof that the bargaining relationship was strengthening and both parties were prepared to try something new," said Joy.

But one day before the two sides voted to ratify the framework, government released its' own bargaining framework bringing up the idea of a 10-year teachers deal, as well as introducing mandatory mediation within four months if bargaining didn't produce a deal. The union called the framework "irrelevant" and the employers' association was unsure how it would work with the existing framework.

Six months later government halted bargaining, dismissed the employers' board of directors, and appointed their own chief negotiator and public administrator to the employers' association, asking for a 10-year deal.

"The 10 year deal idea that they said they needed a restructuring in bargaining to achieve has shrunk to a proposal for six and the longest strike in history proceeds," said Joy, adding trustees, not government, should be in charge of bargaining with teachers.

"The politics needs to be left behind and the bargaining table needs to become the priority."