Abbotsford is hoping to argue its way out of a lawsuit that contends its bylaws hurt the ability of homeless people to access safe shelter in the city. 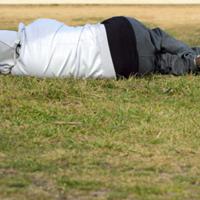 It's the latest in a series of actions that bring into question the city's approach to addressing homelessness. Last summer, Abbotsford was criticized after city workers dumped chicken manure at a homeless camp. Then, five days before Christmas, the city cleared out a camp in Jubilee Park, which advocates argued sent people to the streets without safe shelter.

At present, Abbotsford's Parks Bylaw prohibits individuals from staying in a park overnight, and its Street and Traffic and Good Neighbour bylaws make erecting a structure, like a tent, illegal. According to DJ Larkin, the lawyer leading the case against Abbotsford, these are things homeless people need to do in order to survive.

"Abbotsford is using laws to push people into alleys and under bridges, putting them in harm's way and making their lives incredibly unsafe," said the Pivot Legal Society lawyer in a press release.

Larkin believes Abbotsford's shelter space is not enough to house everyone without a home. Coupled with the city's lack of low-barrier housing, this means the only option for many homeless people is life on the streets.

Abbotsford Mayor Bruce Banman reportedly told the CBC the city is doing its best to help the homeless, but is strapped for resources.

"The city should be taking steps to fight homelessness instead of fighting people without homes," said Doug Smith, a member of the BC/Yukon Association of Drug War Survivors (DWS), the organization that brought forward the lawsuit. "We deserve to be recognized as citizens whose rights need to be protected."

"If the city wins today, these voices will be silenced and people who have almost no access to the justice system won't have the opportunity to have their most fundamental human rights adjudicated," said Larkin. "We have to make sure these people have the right to go to trial."

In 2008, the B.C. Supreme Court held that Victoria bylaws prohibiting homeless people from erecting shelters in a city park violated Charter rights and was unconstitutional. That ruling, known today as the Adams Decision, has encouraged similar challenges to other cities and their bylaws.

In addition to the Abbotsford lawsuit, Pivot Legal Society is heading another case in B.C. Supreme Court condemning three Vancouver bylaws -- the Street and Traffic Bylaw, the Parks Control Bylaw and the City Land Use Regulation Bylaw -- that make activities like lying on the street, putting up a tent and staying in parks after hours illegal.

The lawsuit was filed in 2012 on behalf of Clarence Taylor, who had been living on the streets since 2009. During that time, he was approached by Vancouver police and the city's engineering staff approximately 100 times and issued several tickets for erecting structures on the streets.

"Clearly we have not yet achieved the goal of having no one ever have to sleep outside," said Larkin in an interview in May. "We need to change the bylaws right away because they are still being used to displace people into less safe areas of the city."

"Canada lacks a national housing plan. Provincial and federal governments are not creating enough social housing and enough services for people on the streets. Instead of helping, municipalities are more frequently enacting bylaws that criminalize people's existence," she said.

"This is the opportunity that people have to stand up and say we need to be treated better," added Larkin.