A team of former federal Liberal backroom strategists has partnered with a technology startup specialist and an executive from a Mexican-owned telecom with a dream of building a $10-billion oil refinery on B.C.'s north coast. 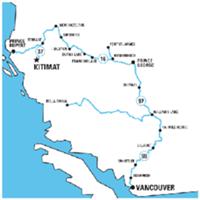 Pacific Future Energy's proposal, like B.C. newspaper baron David Black's 2012-hatched Kitimat Clean, relies on both approval and construction of the contentious Enbridge Northern Gateway pipeline. Both are looking for billions in financing, but the June 10-announced bitumen refinery bid claims it would be powered by a combination of natural gas and renewable energy.

The federal Conservatives are expected to announce its decision on Northern Gateway any day now. If approved, opponents have vowed to fight it in court.

Mark Marissen, a one-time lobbyist for Enbridge, is listed as executive vice-president of communications and research on Pacific Future Energy Corp.'s masthead. Marissen and Premier Christy Clark were once married, and share joint custody of a son. Marissen worked on Clark's 2013 election campaign, leading Clark to make the extraordinary pledge not to be involved in any cabinet discussion or decision about oil refineries.

It is not clear when Clark found out about Pacific Future Energy. She told reporters at a news conference yesterday that she learned the "proposal was going to become something real last week" and then contacted Paul Fraser, conflict of interest commissioner, for advice.

The B.C. corporate registry shows Pacific Future Energy was established Jan. 16, 2014 and the only director is Robert Delamar, a technology startup and venture-capital specialist whose address is listed in rural Rosedale, B.C. Delamar is listed as CEO on the company website.

The company's executive vice-president of government and regulatory affairs is Jamie Carroll, a lobbyist with Ottawa-based Tactix. Carroll resigned as national director of the Liberal Party of Canada in October 2007. Most recently, he was chair of Joyce Murray's leadership campaign. His bio says he has "focussed principally on the defence, mining, oil and gas, telecommunications, pharmaceutical and gaming sectors since leaving government."

His Pacific Future bio says he has "provided advice" to both the District of Kitimat and the Haisla First Nation about Douglas Channel-area oil and gas developments.

Vice-president of Indigenous Partnership is Jeffrey Copenace, the former deputy chief of staff to ex-Assembly of First Nations national chief Shawn Atleo and an ex-aide to Prime Minister Paul Martin.

Roop Virk is the Chilliwack-based chief of staff. The former policy chair for the federal Liberals in B.C., Virk worked with Marissen on Stéphane Dion's winning Liberal leadership campaign. Virk attended a posh Christmas party thrown by Marissen for a close circle of Liberals last December at the Glowbal Restaurant in Yaletown.

Virk has occasionally written letters to the editors of B.C. newspapers, not identifying his party affiliation, but boosting Clark and her policies on resources. "Despite what some folks seem to think, the real job creators and revenue generators in this province continue to be our natural resource sectors of mining, forestry, oil, gas and coal," said Virk's May 21, 2014 letter to The Province.

On April 3, Virk was registered in B.C. to lobby for Azteca, a telecommunications company which lists its business address in Bogota, Colombia. The subject matter was listed on Virk's form as "information technology" and the intended outcomes were "examining and gathering information on best practices." The target contacts for the March 1-Aug. 1 undertaking are Clark and Andrew Wilkinson, minister of Technology, Innovation and Citizen Services. Under B.C.'s lobbyist act, there is no requirement to disclose whether meetings took place.