One day after offering changes at the bargaining table but receiving nothing from its employer in return, the BC Teachers' Federation announced it will take another strike vote, this time for a province-wide walkout. 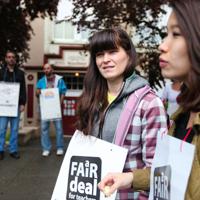 "To get a fair deal and better supports for students, it's time to exert the maximum pressure possible," union president Jim Iker said at a press briefing this afternoon.

The vote, scheduled for June 9 to 10, will happen in addition to another week of rotating teacher walkouts. This will be the third week of walkouts, with districts losing one day of classes per week.

Education Minister Peter Fassbender said he is "disappointed" with the teachers' decision to vote on an escalation of the strike. But in an emailed statement released two hours after the union's press briefing, he insisted "this in no way changes our resolve to get an agreement by the end of June."

"Teachers deserve a raise, but the parties are very far apart on wages and benefits," Fassbender said. "Right now, their total compensation demands are still about four times more than the settlements reached at other tables."

Iker said union brass made the decision to move to the final stage of the three-stage strike action after the June 3 bargaining session, before the Labour Relations Board released its ruling that dismissed the union's complaints about its employers' ongoing teacher lockout.

Since May 26, the BC Public School Employers' Association has banned teachers from working on school property longer than 45 minutes before or after class, or during lunch and recess. Teacher pay has also been cut by 10 per cent, and both conditions will remain until the teachers sign a contract.

"I am satisfied that neither these [teachers'] strike activities nor these lockout activities contravene the designations in [the essential services order]," reads the board decision. The board also suggested the 10 per cent pay cut be brought to an arbitrator.

The Education Ministry also released a statement from Michael Marchbank, public administrator for the employers', who said of the ruling "[Our] actions were in direct response to the British Columbia Teachers' Federation's stage [one] strike, and based on the principle that if people are partially withdrawing their services it is appropriate there should be a partial reduction in their wages," referring to teachers' refusal to meet or communicate in writing with their administrators, or supervise students outside of class time.

"We hope the BCTF leadership will now turn their full attention to trying to resolve this labour dispute at the bargaining table."

Still, Iker called the lockout "ill-conceived" and described it as "Christy Clark's lockout," despite claims last week from the employers' chief negotiator Peter Cameron that Premier Christy Clark had no part in the lockout decision.

The union president also told media the ongoing lockout would result in fewer student field trips, and that teachers would not be able to help students outside of class or complete report cards in time, claims Cameron also disputed last week.

'We showed them some good faith': Iker

According to documents released by the employers' association today, the union budged on almost all of its proposals, including class size and specialist-teacher-to-student-ratios, salary professional development funding, prep time, teacher-on-call pay, and health and dental benefits.

Changes include a salary proposal of 9.75 per cent plus 2.25 cost of living increase, down from the 10.75 plus 2.75 cost of living proposed April 30; a reduction in the proposed learning assistance and special education teacher ratios; a one-time increase in professional development funding instead of three increases; and a cut to in-school teacher prep time, while increasing prep time for online teachers.

The employers' association is still offering a salary increase of 7.25 per cent over six years. It's a wage both Fassbender and Marchbank called fair.

"[It's] in line with recent agreements covering nearly 116,000 public sector workers. The offer also includes a special $1,200 signing bonus if we reach agreement before the end of June," said Fassbender in a statement.

Fassbender, but not Marchbank, mentioned class size and composition once, acknowledging they "are also on table and need to be negotiated."

The employers' position has been to keep class sizes at their current level of a maximum of 22 students in kindergarten; 24 in Grades 1 to 3; and 30 students in Grades 4 to 12. They reject specialist-teacher-to-student ratios, and have said implementing the union's class size and composition formula would be both expensive and detrimental to students' learning outcomes.

Iker said the lack of movement from the employers at the bargaining table is disappointing. "We showed them some good faith -- despite their unwillingness -- that we're willing to move and that we're about compromising," he said.

If next week's strike vote passes, the union has to give the employers three working-days notice before walking out. It would be the first full-scale, province-wide strike since the teachers walked out in 2005, shutting down schools for 10 days. The B.C. Supreme Court later ruled the union in contempt of court for the strike and fined it $500,000.

Despite the two days of classes already lost and the promise of at least one more next week, Iker said the understanding and support for teachers from both the public and parents has been "unprecedented."

"Our rotating strikes have made a real impact," he said. "The public conversation and understanding about class size, class composition, and the role of specialist teachers has never been higher."

Iker wasn't concerned about losing that support with a full-scale strike, despite province-wide student walkouts today that saw both sides of the bargaining table criticized. A student rally is planned for Vancouver on Friday.

Media questions about how the union could afford cover teachers' lost pay from the 10 per cent wage cut or during a full-scale walkout were dismissed by the union president as "not a question we're talking about."

But Fassbender was talking about it: "A full strike is only going to keep more students out of their classrooms, create more disruption for parents, while teachers and support workers caught in the middle will lose even more in wages," his statement read.

"There is no bottomless pit of money and the rotating strikes are certainly not going to help teachers' and support workers' pocketbooks."

Of the money saved from teacher salaries, the employers' association has said 80 per cent must be returned to the ministry while the other 20 per cent can be used to compensate districts for extra costs caused by the teachers' strike.

The two parties are back at the bargaining table again today. The union will release a schedule for next week's rotating walkouts by Friday.