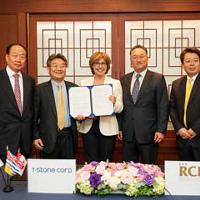 An April 22, 2008 proposal to SFU president Michael Stevenson -- which was copied to Clark -- said RCI Pacific Gateway Education Inc. was "chaired by SFU alumnus, former B.C. Deputy Premier and Education Minister Christy Clark." Clark studied at SFU in the late 1980s, where she headed the campus Young Liberals club, but did not graduate.

When the RCI story broke in the National Post on April 10, NDP leader Adrian Dix accused Clark of hiding the business relationship with RCI, but Clark claimed her involvement with RCI was brief and minimal.

RCI claimed it could generate $70 million in revenue for SFU if it could recruit 1,050 undergraduate students over three years from China, Japan, South Korea, India, Vietnam and Taiwan.

Clark's position with the RCI subsidiary was also touted in a proposal to the University of New Brunswick Saint John dated the same day. Clark was named in, but not copied on, a June 6, 2008 proposal to Nova Scotia's St. Francis Xavier University.

A Jan. 29, 2008 proposal to the University of Winnipeg said RCI's student recruitment model had been successfully deployed at Acadia University, Concordia University and University of Lethbridge. "Between 2001 and 2003, the number of students recruited through these specially designed programs averaged 250-300 a year for Chinese market alone."

It does not appear any of RCI's 2008 proposals were successful.

The PowerPoint presentation to SFU included a photograph of a Dec. 4, 2007 memorandum of understanding signing in India by a representative of Vancouver Community College and RCI Capital India Pvt. Ltd. chair Dr. Gulzar Cheema to deliver VCC's Asia Pacific Gateway Scholars Program. During his 2001-2004 time in office, Cheema was the BC Liberals' Minister of State for Immigration and Multicultural Services. Then-premier Gordon Campbell is in the photo as a witness to the signing.

File not yet 'formally' sent to conflict commissioner

Clark's name remained on RCI PGEI's corporate registration through its delisting in May 2011, two months into her premiership. RCI Capital representatives traveled with Clark on 2012 and 2013 trade missions to Asia. Last November, RCI brokered an MOU for up to $1 billion of Chinese investment in B.C. wood pellets as a coal substitute. SST Wireless, which is chaired by RCI CEO John Park, received undisclosed loans from the Southern Interior Development Initiative Trust to develop a high tech tire gauge for mining trucks.

In Question Period on April 10, Clark downplayed her role in RCI: "Not only did I not get paid by the company, not only did I not attend any meetings on behalf of the company and not only did I cease my involvement when I got involved in the media, but I also, as the member should know, had no obligation to declare my relationship with that company in the time that I was working in the private sector and outside of politics."

CKNW reported on April 10 that Clark would refer the RCI matter to Conflict of Interest Commissioner Paul Fraser to sort out. "Oh, absolutely, I mean I'll ask him what he makes of it and see and make sure you get his answer," said Clark. Her Sept. 27, 2007 RCI contract came a month after she launched a Monday-to-Friday afternoon talk show on CKNW that ran until 2010.

But will Fraser handle the RCI file?

As of April 16, Fraser had not decided how to proceed on the RCI issue.

"If or when this issue is formally referred to this Office, it will be dealt with. In the meantime, the Commissioner will have no further comment," said an emailed statement from Fraser's office to The Tyee.