Before they even walked out the door and onto the picket line, more than 3,000 workers at CN Rail were told yesterday they would be legally mandated back to work by the federal government -- despite protests from the union who said it could lead to the next big rail accident. 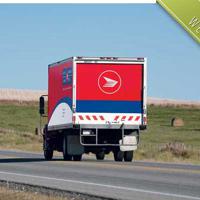 Fix Canada Post? Union Has Its Own Bold Ideas

After the Teamsters Canada Rail Conference issued a 72-hour strike notice, Labour Minister Kellie Leitch told reporters in a last-minute press conference Wednesday evening that the federal government would table legislation to force workers back on the rails.

The employer and union, however, came to a tentative, three-year contract agreement a few hours later.

While it's not yet clear what the agreement entails, the union's initial reasons for striking were straightforward -- members said they were overworked, some to their breaking point. Back-to-work legislation would've forced workers back to a job site they argued was unsafe, under an employer they said wasn't respecting their collective agreement.

Minister Leitch did not answer what the government planned to do to offset those concerns if Ottawa did force workers back to work. "We're focused on the economy," Leitch repeatedly told television cameras as she announced the legislation.

The 3,300 workers who service the 30,000-plus kilometres of track in Canada were set to walk off the job by Saturday. They argued the deal they were rejecting -- one that's been reportedly fixed -- could have jeopardized their safety, as well as the well-being of those who live near CN's expansive lines.

Before the deal was reached, Stephane Lacroix, a spokesperson for the Teamsters, which represents the affected conductors and railworkers, called back-to-work legislation the "worst case scenario."

The deal was originally rejected by over 60 per cent of those members who voted. More than half didn't bother.

"The problem is that it's not about wages, it's not about pensions. It's about safety, not of just our members, but of the public as well," he said. "Our members told us in the past few weeks that they're exhausted."

In early negotiations, the union succeeded in getting a provision in its collective agreement that enshrined a worker's right to labour no more than 10 hours, including the time it takes to get home. The company fought that provision.

Ronald Hackl, chairman of the union, wrote a letter to CN management that said "although the company did not achieve the removal of these contractual provisions, it appears they simply chose to ignore them." Lacroix echoed that, alleging some employees were compelled to work for 12 hours straight.

CN did not immediately return a request for comment.

Transport Canada requires rail companies to establish Fatigue Management Plans, such as the one enshrined in the union's current collective agreement. Non-compliance is initially met with a letter of warning from the government.

It's not clear if the government has sent CN a letter over the issue yet. The government does not appear to have the authority to fine companies for failure to respect the plans.

Backlog on the rails

The federal government has worked hard to prove it's doing enough to ensure rail safety in the wake of the devastating Lac Mégantic disaster in July. But it is also preoccupied with the huge economic cost of bottlenecks on the tracks. Officials told reporters that a labour disruption on the CN lines could cost the country $450 million a week.

Backlogs have piled up following Canada's record grain harvest in the past year -- 25 per cent more than usual. In recent months, as silos full of grain wait to be moved to empty ships idling on the West Coast, the strain on the system has been increasing. The problem is exacerbated by the fact that increasing amounts of potash and oil are are being moved on those lines, and there isn't enough capacity.

"CN kept asking our members to do more and more hours," said Lecroix. He said the union has received dozens of grievances in just the past few weeks.

NDP labour critic Alexandre Boulerice slammed the government's invocation of back-to-work legislation. This would have been their seventh time employing it.

"It's terribly unbalanced," he said in an email, before the tentative deal was reached. "They remove all incentives on the side of CN to negotiate in good faith. In Canada, you now have back-to-work legislation thrown at you only by evoking the possibility of a strike."

In the cases of CP, Canada Post and Air Canada, the federal government waited for a strike to begin before taking such measures.

The tentative agreement now needs to be ratified by the union membership. If rejected, the union will have the option of returning to a strike position -- a less likely move, given the government's threat to legislate them back-to-work.