There are worries in northern British Columbia that aside from the environmental risks, approval of Enbridge Inc.'s Northern Gateway pipeline proposal and the resulting protests could seriously disrupt the economy in communities along the proposed route. 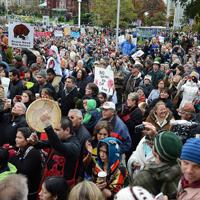 "The concern I'm hearing in my office is this would be a prolonged, sustained protest movement," said Oliver Ray, the executive director of the North Central Local Government Association.

The RCMP may or may not have the resources in the north to deal with such a protest, he said. "There are rumblings that because it's such a high profile project, if Enbridge got the thumbs up there could be a lack of resources in terms of safety and security in northern B.C. given the potential for protests [and] highway closures."

Ray is based in Prince George. The NCLGA represents local governments across the north of the province, covering some 70 per cent of B.C.'s land mass.

He expressed the concerns to The Tyee in late September while attending the Union of B.C. Municipalities convention in Vancouver. Since that time, the Joint Review Panel in December recommended approval of the 1,200-kilometre Northern Gateway proposal, as long as 209 conditions can be met. The project now awaits a decision from Prime Minister Stephen Harper's cabinet.

There is little doubt that Gateway's approval, and failure to block the project by other means, would spark protests in a province with a long history of direct action, blockades and mass arrests.

Brian Huntington, associate director of the Skeena Watershed Conservation Coalition in Hazelton, pointed out the Haisla have said since the project was first proposed that they will go to any lengths necessary to stop it and protect the land. "I don't think there's been anything to change their minds on that."

In December, the Yinka Dene Alliance announced representatives of 130 First Nations have signed the Save the Fraser Declaration, "an indigenous law banning tar sands pipelines and tankers from crossing B.C." Gavin McGarrigle, the Unifor Area Director for B.C., is on record saying the largest union of energy workers will stand in solidarity with First Nations against the project, even if that means participating in civil disobedience.

Yinka Dene spokespeople did not return requests for comment by publication time.

"Some communities exist solely because there's a highway that comes to and from that particular community, so if they were shutdown for a period of a day, nevermind a week or days at a time, it would be huge," said the NCLGA's Ray.

"Just imagine a roadblock on Highway 16 with 200 people, 250 people," he said. That would put a big strain on the RCMP, he said. "Those people have to be removed, they have to be removed safely... Obviously those would be resources that are taken away from the regular policing that happens in northern B.C."

Constable Lesley Smith, the RCMP's media relations officer for the north district, said she is limited in what she can say on the matter. She asked for questions by email, but did not respond to one asking directly if the RCMP is already planning how to handle blockades or other civil disobedience aimed at the Northern Gateway project.

"We typically don't comment on speculation," she said. "In general terms, with respect to any protest or demonstration, the RCMP is an impartial party. We uphold the law, maintain the public peace and ensure safety for all parties, including the protesters."

The police are mandated to do what's necessary to maintain public safety, she said. "If the protest is no longer peaceful or lawful, the police will need to mitigate the circumstances."

She did not, however, address the question of how much capacity the RCMP has in northern B.C. to deal with such a situation.

The BC Liberal MLA for Prince George-Mackenzie, Mike Morris, spent 32 years working for the RCMP, including nine years as the head of policing in the north. "The RCMP's always prepared to deal with any kind of civil disobedience or any kind of public safety event that occurs anywhere in Canada," he said. "It's part of our, or their, responsibilities under the various contracts that we have."

The RCMP has the advantage of being able to bring in what it needs from elsewhere in the country, as it did in the 10 years that went into planning for security for the 2010 Olympic Winter Games in Vancouver and Whistler, he said. "One of the benefits the province of British Columbia and all the other provinces who have contracted the RCMP have, is access to all RCMP resources right across the country."

Skeena Watershed's Huntington said it's "discomfiting" to consider the possibility of Enbridge's proposal leading to blockades and arrests. "It's just not something we've ever had to consider around here," he said, noting people in Hazelton generally view the RCMP as a supportive resource.

He recalled, however, that in her presentation to the Joint Review Panel, "local folk hero" Ali Howard, who in 2009 swam the Skeena, warned that approval of the project could lead to civil disobedience.

There are also 12 other pipeline proposals related to liquified natural gas in the region, he said. "Enbridge is part of the cumulative stress on people's hearts and minds."

The result is people feel like there is a lot of pressure for major changes, he said. "These are landscape level projects that will alter the way this entire northcoast ecosystem functions."

The Dogwood Initiative's director of organizing, Celine Trojand, grew up in Dawson Creek. The environmental advocacy group has campaigned against the Northern Gateway proposal and the associated increase in tanker traffic on the coast.

"From our perspective, we want to do everything we can without civil disobedience," she said. For example, if the project is approved, the group plans to use British Columbia's recall and initiative legislation to force a referendum on the unpopular project, she said. That process was successfully used against the Harmonized Sales Tax in 2010.

However, said Trojand, every day she gets a message from someone wanting to know how to get ready for a frontline push to stop the project, sometimes right down to wanting to know what kind of camping gear they'll need.

"Every single one of them says, 'If I have to, I will,'" she said. "British Columbians are brave and we'll do what we have to do to protect the coast... There is a really strong history of civil disobedience in B.C. and they're ready to go there if they have to, but the majority of us don't want to."

It's up to B.C. Premier Christy Clark and Prime Minister Harper to make decisions that will avoid the need for people to exercise that option, she said.