The British Columbia Jobs and Investment Board had double the members, half the power and a fraction of the lifespan of its predecessor. 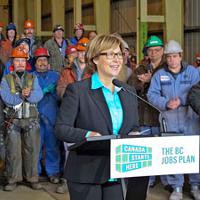 Premier Christy Clark's late-2011 revamping of the B.C. Progress Board, which was created in 2001 by then-premier Gordon Campbell, quietly uploaded its final report to its website Jan. 8, without fanfare or even a mention on the main government news releases website.

Why? Because the report, called Global 360: Attracting Investment In An Increasingly Competitive World, found B.C. is not the most competitive economy on Earth.

"Based on this independent, external feedback, it is apparent that British Columbia has many inherent advantages as an economy, but also a number of challenges to overcome in order to maximize our opportunities to grow our economy and create jobs," said the report.

JIB commissioned a supplementary report by KPMG, which produced a chart under the title "Assessment of B.C.'s investment competitiveness to identified key competitors."

Across the top are key foreign and domestic competitors in forestry, mining, natural gas, agri-foods, technology, tourism, transportation and international education -- the eight key sectors identified in Clark's 2011 B.C. Jobs Plan. Along the side are a dozen factors, from labour availability, quality and costs to investment incentives, energy costs and supply and corporate income tax.

Good news. There are 30 green arrows, denoting B.C. is "relatively competitive" in some sectors against some jurisdictions. There are also 20 grey arrows for "mid-range with identified concerns" and 21 for "relatively uncompetitive." Twenty-five dashes represent "limited information/applicability."

B.C. scored highest for corporate income tax, but lowest for labour availability and costs (which was partly offset by high marks for labour quality).

KPMG pointed to weaknesses in B.C. transportation infrastructure, regulatory environment, First Nations land claims and public attitudes toward certain industries. KPMG also noted B.C. was only one slot below leader Hong Kong on a ranking of the world's 325 least-affordable locations. It is the only major measurement in the board's main report, which offers 67 recommendations.

The B.C. Progress Board's job was not only to advise the premier on improvements, but to measure and benchmark where B.C. was. Its final report in 2011 didn't flatter Campbell and wasn't in keeping with his "B.C.: Best Place on Earth" branding. During the Olympic decade, B.C. had fallen behind the rest of Canada on several fronts, including economy (fourth in 2000 to fifth in 2010), personal income (third in 2000 to fourth in 2010), jobs (fifth in 2000 to seventh in 2010). While B.C. remained tops in environmental quality and health outcomes, it was also stuck in a dismal ninth for social condition.

Said chair Gerry Martin's letter in the last B.C. Progress Board report: "The B.C. Progress Board passes the torch to the new Jobs and Investment Board and hopes it enjoys the same level of support and respect afforded to this body by government. We are pleased to see that they will '...hold government's feet to the fire on clearing the way for job creation while continuing to monitor important social and economic indicators.'"

Martin, Northern Drugs co-owner, and Harry McWatters, Okanagan wine tycoon, were the only two holdovers from the eight-person Progress Board to the 16-member JIB, which included Clark loyalists Wendy Lisogar-Cocchia and Stockwell Day.

The council chair was Ray Castelli, the former chief of staff to Prime Minister Kim Campbell and CEO of Burnaby-based Weatherhaven, which supplies portable shelters for military, mining and disaster use.

Clark did not empower the council to do benchmarking or measuring, nor did it consider social wellbeing; it was focussed on jobs alone and its final report was eventually buried by the government communications machine.

Castelli did not respond to an interview request this week. In an April 29 email, he said the final draft was to be ready for "final sign off by the board in the next week. We'll go to production once we have that.

"Our goal is to publish by the end of May and have it available to whichever government is sworn-in," he said.

The BC Liberals won surprise re-election on May 14, 2013. Shirley Bond left the Justice Ministry to assume the Jobs, Tourism and Skills Training portfolio in June. She received the report and met with Castelli in late 2013, according to her ministry.

While the Progress Board was an ongoing entity, refreshed over the decade with new faces, JIB members were released from their duties Dec. 15, 2013.

"The BCJIB's final report was the last deliverable due for its mandate," said a statement to The Tyee from the ministry. "We very much appreciate the good work that has been done by this well-respected group of people. Government has received the final report and work is underway on over 90 per cent of BCJIB's recommendations."

The week after the report, the NDP pointed out that B.C. is ninth among provinces in job growth between September 2011 and December 2013 (according to Statistics Canada), highest unemployment, lowest employment and lowest growth in the West (according to RBC), highest child poverty rate (First Call) and the highest rate of income inequality (BC Stats).

The KPMG report for JIB found surprising negative public attitudes toward tourism ("interviewees believed that the benefits provided tend not to be well articulated and understood") and skepticism about Clark's obsession on building a liquefied natural gas industry.

It also found Australians have a "can-do" mentality not present in B.C.

Said one interviewee, who was not identified by KPMG: "We (Australia) have seven pipelines in development and they'll be finished by the time you've built one."