Prime Minister Stephen Harper's tour of the Lower Mainland today saw him ham it up with the Vancouver Board of Trade and drink hot chocolate with children at a Burnaby photo op. 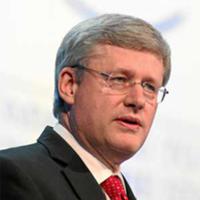 But with no questions permitted at any point from the media during multiple appearances -- including later events banning all but photographers -- the only chance to witness Canada's leader off-script was when two climate justice protesters sneaked on-stage, dressed in thrift-store black aprons, to silently unfurl anti-climate change messages.

"It wouldn't be B.C. without it," Harper quipped to uproarious laughter from an audience of mostly business leaders, as local activist Sean Devlin was thrown down the short staircase at the side of the stage and a female protester was escorted out on foot with her crossed-out sign reading, "Conservatives Take Climate Change Seriously."

While the prime minister extolled his government's policy of always following "the best scientific and expert advice available" on energy projects to a Vancouver Board of Trade audience today, The Tyee was unable to ask about revelations the government has overseen the sweeping destruction of decades of scientific information as it consolidates nine research libraries across the country.

Scientists recently alleged to Tyee reporter Andrew Nikiforuk that few of the records were digitized as promised, with many simply tossed into dumpsters or even burned. The government has so far refused to comment on the revelations.

Today, Green Party B.C. MLA Andrew Weaver took up the issue, labelling the research cull "Orwellian" and "a dismantling of democracy" in an interview with News 1130.

Instead, Harper stuck to his usual message about the importance of a stable economy as well as pipelines from Alberta's oil sands to markets overseas. He told the Vancouver Board of Trade audience that his recently completed free trade deal with the European Union is an example of his government's economic success, but that more must be done to "diversify" Canada's economy beyond the U.S.

"In an era where there is energy demand all over the world, where the energy industry has been the engine of much of Canada's economic growth, it's without a doubt in the country's interest that we diversify our markets for energy," he said.

"The government role is not to endorse particular pipelines, or conclude particular energy business projects. Our job as the government is to set up proper processes of evaluation and approval."

He added that industrial proposals reviewed by government bodies such as the Canadian Environmental Assessment Agency and the National Energy Board meet the "highest" environmental and scientific standards, contrary to accusations by many scientists, advocates and even top American newspapers that the government has been systematically "muzzling" environmental scientists.

"In every one of these cases, whether it's energy or mining projects, the government has always followed the best scientific and expert advice available to us," he said. "We will not approve projects unless they're not only in our economic interest, but also when they meet the highest standards of environmental protection."

Despite seemingly stringent security precautions, including reporters having their equipment inspected by police dogs, the protesters managed to momentarily disrupt Harper's economic message today, arguing that the cost of such government policies, including bitumen exports, are too great to risk.

"There is a moral as well as an economic cost to the Conservative government's inaction on climate change," said protest spokeswoman Anjali Appadurai in a statement. "In addition to the billions of dollars in damages from climate-induced natural disasters, thousands of people's lives were lost in the Philippines just this year, and over 100,000 people were displaced in the recent Calgary floods."