We know there's something up with boys -- the alarms have been sounding for decades. Today, young men are 10 per cent more likely than young women to drop out of high school. Their post-secondary enrollment falls worryingly short of women's, too. In particular, single young men have been hit hard by recession. 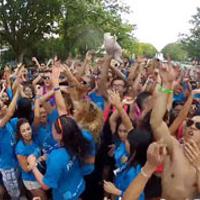 Why Smart Teens Are Sexual Idiots

Recognizing the trends, an increasing number of schools in the Lower Mainland are rolling up their sleeves to do something about it. Windermere Secondary School is the latest of a half dozen secondary schools in Vancouver to create a support group for male youth, called the Young Men's Group.

Meeting every two weeks, the group brings together Grades 9 to 11 male students with male mentors -- teachers and other volunteers -- to take part in trust-building activities, story sharing, and frank discussions about gender, health, sexuality, and other pressures facing young men.

These pressures aren't new: all youth face the stress of doing well in school, impressing peers, and getting along with family. But the world has changed, says Young Men's Group co-founder and Windermere teacher Gavin Clark, and that affects how young men process and cope with pressure today.

"[There's] a changing attitude towards masculinity and males, and I think some of the challenges in the work world are greater. The future and the certainty of gainful employment is probably less than it was when I graduated," he said.

While women have been able to change their roles in Western society with considerable success, men have been expected to remain the same: stoic, strong, independent, economically driven and emotionally isolated from others, said Clark. It's a tough, confusing, and restrictive mold to put on young men, and the Young Men's Group is intended to push back against it.

Clark was inspired to start a boys support group at Windermere after a field trip to see Man Up, a play dramatizing the creation of Templeton Secondary's Boys Club, the first group to support at-risk young men in Vancouver. Although Man Up mainly deals with youth at risk of gang involvement, Clark realized the young men he worked with could use a supportive space like the Boys Club, too.

"[Man Up] portrayed the vulnerabilities that are present in some lives of adolescent males," he said. "It was a vehicle with which to share very personal stories, and also reminded me of the role that certainly older male mentors and schools can play in supporting young men to find a safe place, discover other life paths, and really to see their own potential."

Some of those vulnerabilities include emotional isolation, unhealthy choices like drug use or junk food, physical risks like skateboarding without a helmet, or just not sleeping enough, he said.

Most Windermere students are immigrants or children of immigrants -- over 30 languages are spoken in the school. Many are also low-income, with parents working several jobs to keep their families afloat. Kids don't see their parents often, and financial stress can translate into emotional turmoil.

Clark is quick to emphasize boys in the Young Men's Club don't need to participate in risky activities or lack attention from their parents to benefit from it. A safe space and someone who believes in them can do wonders for all young men, he said.

"If [students] don't see academic success in school, then that really can be damaging to their self-esteem," Clark said by way of an example.

"By finding other ways to make connections through positive social groups, through an older person believing in them, supporting them, and caring about them, they will then decide to attend [school] more and get more connected to the community."

After watching Man Up, Clark, along with Windermere's vice principal Damien Willman, and David Hatfield, a leadership consultant and founder of Manology, an ongoing drop-in course on masculinity and men's studies in downtown Vancouver, created a blueprint for the group.

For Hatfield, who has led youth workshops at high schools for a decade, creating an ongoing group was the opportunity he had been waiting for.

"Anybody in education knows that one-off workshops can be very powerful, but their staying power is quite limited," said Hatfield.

"The research around mentoring and at-risk behaviour for boys and young people suggests, not surprisingly, that ongoing, long-term mentorship has the most powerful positive outcomes in terms of social engagement, health, behaviour, less risk-taking, engagement and connectivity."

Before they could start the group, Hatfield met several times with the teachers and administrators who wanted to mentor youth. They needed to work on themselves, and each other, before they could mentor.

Windermere's group officially started Jan. 2013, initially meeting once every week in its first semester, and now every second week. In the beginning, about 20 boys were involved, with meetings ranging in size. This semester, the average attendance is 12 boys per meeting, with many who attended last year returning to the fold.

Each student who attends agrees to follow what the group calls The Bro Code: a social contract involving respect for the space, encouragement of others, courage, and confidentiality. Boys should feel free to let their guards down, without worrying what they say or do will be used against them outside the group.

The fact students from last semester returned to the group is one marker of success, Clark said. It shows students know there are adults that care about them and support their achievements.

Another sign is the connections the group has made with outside agencies like Vancouver Coastal Health and Collingwood Neighbourhood House, which provide speakers on topics like masculinity, health, and media. The group has also met with counterparts in other Vancouver high schools.

"We have inspired some other groups to either deepen their work or to help encourage or provide support for other groups getting started," Clark said.

Clark hopes to strengthen those connections further with a Young Men's Wellness Forum, to be held at the end of January. It will bring together educators, health organizations, and non-profits to talk about the work Clark and Hatfield are doing, and how to start groups like theirs at other schools.

While young men are struggling, girls and women still need support, too. Recent Canadian news stories of girls bullied for sexting or girls sexually assaulted with tragic consequences, point to some of the pressures facing young women today.

But the issues aren't unrelated, and Hatfield said it's time boys and men found their own supportive community to examine, and possibly change, the gender "script" -- or societal expectations of how men "should" behave -- for masculinity.

"How is male identity being shaped: is it really that much different than it was in 1950 or '60?" Hatfield asked.

"We know better than to continue to socialize girls to measure their value by how sexually attractive they appear to folks their own age. And same for boys, the stoicism stuff," he said.

Teachers shouldn't shame students when they act to their "scripts", Hatfield said. Instead, they should use it as learning experience.

"Get young men and young women interested in the idea, the realization that these scripts are happening, that they're a forceful part of our socialization process and to have enough awareness to call it as it's happening, to say 'There's those invisible strings pulling us around and influencing our behaviour and our judgment,'" he said. "Then ask, 'What do we want to do about it?'"