"Just wrapped up a meeting with several staff members, at midnight. Good thing they're not unionized!" 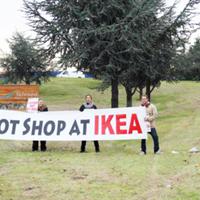 Although quickly deleted, the sentiment of federal Conservative Employment Minister Jason Kenney's tweet on Nov. 19 hit a deep nerve for some trade unionists across the country -- particularly those already worried about what the federal Conservatives have in mind for labour legislation in Canada.

A set of non-binding resolutions was adopted earlier this month at the federal Conservative party convention in Calgary. The resolutions include a call on government to reduce wage and benefit levels for civil servants. The resolutions also call for stripping unions of the right to use member dues to support social policy campaigns and other expenditures not part of a set of narrowly-defined workplace issues.

The resolutions, in addition to clauses in Bill C-4, the omnibus budget bill currently before Parliament, aren't merely expressions of Conservative anti-labour sentiment; according to trade unionists and labour advocates, they signal a growing war on Canadian workers.

For one, trade unionists argue because Tony Clement, Conservative cabinet heavyweight and president of the Treasury Board, supported a resolution at the convention that calls for public-sector wage and benefit roll-backs, it suggests that the Harper majority government may be inclined to implement them.

"We're not here to buy labour peace through caving in to every single public-sector union boss's demands," Clement told The Globe and Mail at the Calgary convention. "We're not here to do that. We're here to represent the taxpayer."

Bob Jackson, regional vice president of the Public Service Alliance of Canada, describes Conservative actions on labour as "an all-out declaration of war on unions, coming from the highest levels of the party." Jackson traveled to Calgary to participate in a union-sponsored demonstration outside the Calgary Stampede Grounds where the convention took place.

"We have never encountered this level of animosity and ill will from the government before," Jackson said in an interview. "They want to get rid of us and to strip away things we have maintained for decades."

Hassan Yussuff, secretary treasurer of the Canadian Labour Congress, shares Jackson's concerns about a turn to more anti-labour confrontations by the government. Yussuff said he thinks Minister Clement is "fixated" on rolling back gains that organized labour has won over the past half century.

As well, Yussuff highlighted language in the bill that would allow the government to unilaterally define workers as "essential" during a labour dispute, a definition that has previously been negotiated between the employer and public-sector workers.

This power could conceivably allow government to define workers in a particular job setting as essential, rendering strike action impossible.

Simon Fraser University professor Marjorie Griffin-Cohen is also concerned about the Conservatives' get tough approach to labour, as evidenced both in the Calgary resolutions and the provisions of Bill C-4. In particular, she said the right of unions to use member dues in social policy campaigns is important.

"If trade unions were not active in encouraging governments to deal in fair ways with labour issues, they would be derelict in their support of labour," Griffin-Cohen told The Tyee via email.

"Corporate spokespeople, of course, are really objecting to labour uniting on political issues -- they would much rather every individual work organization deal with their mighty power all by themselves," she added.

Resolutions 'not an attack on labour': CPC activist

If the Harper government is declaring war on organized labour in Canada, John Mortimer has no apparent objections.

Mortimer, president of the Labour Watch Association and a board member of the Canadian Taxpayers' Federation, is a prominent spokesperson for Canadian conservatism who ran for Parliament in 2000 for the Canadian Alliance.

"Unionization doesn't belong in the public sector," Mortimer said, adding that he does not endorse any specific party because of his role in the taxpayers' federation.

Mortimer said that Canada is the only country in the world in which unions can collect compulsory dues and spend part of what is collected to campaign on broad social issues like poverty, minimum wage levels and environmental protection.

"Look at what the Canadian Autoworkers did not so long ago. They used auto workers' dues to bring Saint [David] Suzuki to a meeting to tell the members their industry was 'disgusting'," he said. "I have no issue if a union wants to donate to a party or to promote a cause, but they shouldn't be able to use mandatory dues collected from all of their members to make those donations."

Vancouver lawyer and Conservative Party activist Scott Lamb, a member of the party's national council, said there was broad party support at the Calgary convention for the labour-related resolutions. He disagrees with critics who characterize them as a "war."

"That's not fair. We are a grassroots party," he said in an interview. "Those resolutions came from all across the country. They were not an attack on labour."

The business-friendly Fraser Institute recently weighed in on public sector wages in an April report that suggested public-sector workers have, on average, a 12 per cent better wage level than comparable workers in the private sector, with most of the difference due to the higher level of unionization in the public sector.

The tone of the Institute's report suggests that it would be better for public employees to have their wages reduced than for private sector workers to earn more in order to address this disparity.

Since 1946, after an influential arbitration ruling by Justice Ivan Rand in an auto industry dispute, Canadian labour law has permitted unions to collect dues from all workers in a bargaining unit, whether they choose to join the union or not.

This led to government and the courts allowing unions to use dues not only for narrow job site issues, but also for campaigns, such as the BC Federation of Labour's long-standing push to increase the minimum wage in British Columbia.

In the early 1990s, for example, the Supreme Court of Canada ruled in Lavigne v. Ontario Public Service Employees Union that "the state objectives in compelling the payment of union dues which can be used to assist causes unrelated to collective bargaining are to enable unions to participate in the broader political, economic and social debates in society, and to contribute to democracy in the workplace.

"These objectives are rationally connected to the means chosen to advance them, that is the requirement that all members of a unionized workplace contribute to union coffers without any guarantee as to how their contributions will be used," the judgment continues. "An opting-out formula could seriously undermine the unions' financial base and the spirit of solidarity so important to the emotional and symbolic underpinnings of unionism."

Unionization in the Canadian private sector is down from 30 per cent in 1997, to 18 per cent last year in both Canada and B.C. Public-sector unionization is just over 70 per cent, even after a 4.7 percent reduction in that sector over the same period -- a reduction created mainly by the contracting out of public services to for-profit providers whose workers are often not unionized.

If the recent Tory convention resolutions ever make it into Canadian law, trade unionists worry the kind of "social unionism" described in the Lavigne case will become illegal, and union membership could continue to shrink across the country.