Ten known or probable carcinogens now saturate the air downwind of Alberta's Upgrader Alley, the nation's largest bitumen and hydrocarbon processing centre, while male blood cancers and leukemia in the region are the highest in the province. 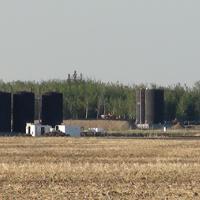 That's the conclusion of the Rowland-Blake Group, a University of California-Irvine laboratory that took a snapshot of air quality in Fort Saskatchewan just 30 kilometres northeast of Edmonton for two days in 2008, 2010 and 2012.

Alberta's Industrial Heartland, located in a farming community, is comprised of 40 different chemical, petrochemical and bitumen processing operations spread out over a 582 km area near Fort Saskatchewan.

In addition to upgrading bitumen, a heavy sour crude, heartland industries make fertilizer, separate condensate for pipeline shipments to dilute bitumen, and break-up hydrocarbons for the manufacture of plastics, foams and fibres.

Nearby residents and farmers have complained about bad air, hydrogen sulfide pollution, massive flaring and poor regulation in what they also call "Cancer Alley" for years.

Air quality in the region was rated the worst or among the worst of 11 provincial monitoring stations in 2004, 2005 and 2006, according to the Pembina Institute.

After collecting air samples in two-litre canisters, the Rowland-Blake Group found "strongly elevated levels" of Volatile Organic Compounds (VOCs), a class of pollutants that includes many greenhouse gases and carcinogens.

Downwind of the sprawling Shell Scotford complex, which includes a bitumen upgrader, refinery and chemical plant, researchers found, for example, "levels of benzene, ethylbenzene and styrene that were 1.6, 2.0 and 4.0 parts per billion by volume. That's 19, 435 and 6,070 times higher than local background concentrations measured on the same day."

In many cases the levels of pollutants found in the region exceeded those found in toxic Mexico City in the 1990s, or refinery row in the Houston-Galveston Bay area.

"Remarkably, the maximum propene level (107 parts per billion by volume) was almost double that measured in the Houston-Galveston Bay area (56 ppbv), even though Houston is both a much larger metropolitan area than Fort Saskatchewan and the largest petrochemical manufacturing center in the United States," noted the study published in Atmospheric Environment.

Propene is a suspected of being a human cancer-maker.

The study added that "some of the largest VOC excesses were measured in samples designated as 'no smell,' showing that absence of odor is not necessarily an indicator of good air quality. The industrial plumes showed distinct chemical signatures that varied not only between facilities but also within individual facilities."

"The levels did surprise us because it is a rural area," explained Isobel Simpson, an atmospheric chemist with Rowland-Blake Group and a resident of Medicine Hat, Alberta. "Some VOCs were higher than in other major industrial areas while others were lower."

"The residents I've talked to in the area are frustrated," said Simpson. "They have voiced their concerns for years. And that's one of the reasons we recommending the reduction of carcinogens in the region."

The study concluded that "the elevated incidence of cancers in the Industrial Heartland region that are known to be linked to VOCs released in the region raises questions regarding whether ambient levels, emission controls, and risk calculations are adequately protective of public health."

Chemical Valley in Sarnia, which also processes bitumen and other hydrocarbons, releases more toxic air pollutants than the province of Manitoba or New Brunswick.

Members of the Aamjiwnaang First Nation, who live in the middle of a chemical soup made by the likes of Imperial Oil and Shell, routinely blockade roads in the area to protest ongoing pollution as well as plans to expand bitumen upgrading and refining facilities.

In 2011, the World Health Organization rated Sarnia as having among the worst air quality in Canada.

Recent research on the oil sands in Fort McMurray tells, as scientists put it, "a consistent story of increased contaminants and ecological change" since bitumen production began in the late 1960s.

Elevated rates of blood, bile duct and lymphatic cancers have also been found 300 km downstream of the oil sands in the Dene, Metis and Cree community of Fort Chipewyan.

Almost everyone working in the bitumen mining boomtown of Fort McMurray knows someone who has had a brush with cancer.

Nearly 30 years ago, the Rowland-Blake Group identified the role that chlorofluorocarbons played in destroying stratospheric ozone. The pollutants are now outlawed.