It's been a rough couple of years for Montreal. 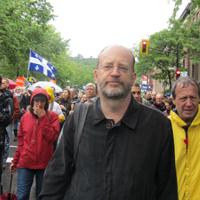 Among Protesters in Montreal, Visions of BC Unrest

You may have read about it: the stories of construction magnates meeting with mobsters, money stuffed in socks, and bribery at city hall.

The city has had three mayors in the space of a year (two of whom resigned amid corruption charges), and on Nov. 3 will elect a fourth to replace interim mayor Laurent Blanchard.

However, from out of this municipal decay comes a story of a bright, energetic corps of newcomers who are trying to take their city back.

A poll released Oct. 7 puts Richard Bergeron, the leader of a new group of politicians under the banner of Projet Montréal, in second place with 23 per cent in the mayoral race, trailing behind former Liberal MP Denis Coderre with 39 per cent.

Although the party is not without its own controversy (Montreal police were recently asked to investigate an anonymous allegation of misuse of public funds, denounced as a smear by some media), Bergeron merely took it as a sign the campaign was going well.

Regardless of whether he takes the mayor's seat, Bergeron's team of candidates has injected an energy into Montreal's city politics in a way not seen in recent years or maybe even decades.

Whereas for the past few years, Canadian cities have been looking to Montreal for examples of what to avoid in running a city, this new crop of candidates might provide some lessons to imitate.

At the Sept. 20 press conference for the official launch of the municipal election campaign, the assembled candidates from Projet Montréal cut a striking figure. There was a nearly florescent green suit. One candidate for borough councillor, a graffiti artist and gallery owner, had visible half-sleeves of tattoos. Many of the men were not wearing ties.

These are not your typical politicians. Rather than coming from the almost clannish voting blocs that so often control city politics, candidates from Projet Montréal have activist, creative and academic backgrounds.

This diversity is partly what has attracted a young, progressive contingent of volunteers to Projet Montréal's campaign.

On Sept. 19, the night before the campaign period started, a team of Projet activists met in a former police station not far from Concordia University in Montreal's downtown to make the campaign's posters.

"What these kids are doing is so important," said 45-year-old Fidel Fuentes, before explaining to the assembled crowd how high off the ground the signs had to be to comply with election rules.

Fuentes should know. He worked on "every left-leaning campaign for the past 20 or 30 years" in Quebec, after having lived through the coup and the early years of Augusto Pinochet's rule in Chile.

Many of the assembled volunteers were veterans of last year's Printemps Érable, which brought hundreds of thousands of Montrealais into the streets to oppose a tuition hike, and was widely seen to have brought down the government of Premier Jean Charest. An hour later at Place Émilie-Gamelin, the starting point of the student marches last spring, one Projet organizer commented as he hung a sign from a streetlight, "The last time I did something like this, it was illegal."

Montreal has 19 boroughs, each with its own mayor and councilors, plus a city mayor and a 65-member city council with divisions roughly corresponding to neighborhoods. The mayor, borough mayors, city councils and borough councils are all elected by citizens.

Jason Prince is running for mayor of Montreal's gritty Sud-Ouest borough. He's something of a paradox, both a nerd and a man of action. A bookish academic who likes getting his hands dirty. "I love doers," he said, beaming as we jumped out of the back of an old pick up truck in his neighbourhood.

We had just come from the chief site of the Compost Montreal project, an organization that collects household waste and converts it into agricultural-grade soil. Stephen McLeod, its director, was giving Prince a tour of the facility.

With a flash of white hair and boyish features, Prince is constantly rattling off statistics, thought experiments, and grand schemes at a mile a minute. He much better fits the mold of a community activist and academic, rather than someone hoping to run a large portion of the city. 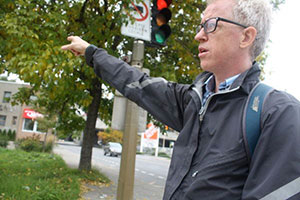 Prince is a professor of social economy at Concordia University, though he has taken a reduced course load in order to focus on campaigning.

Prince sees the role of an urban planner as fundamentally different than that of a technocratic politician. To hear Prince tell it, there is a natural and constant tension between urban planners and those in the private sector. Urban planners inspire with no regard for budgets.

Prince has made a name for himself in the debate around two massive pieces of infrastructure in his neighborhood -- one a monument to the city's past and the other to its idealized future.

The first, the Turcot interchange, is a massive sprawling highway interchange between Autoroutes 720 and 15. It's representative of Montreal itself: formerly state-of-the-art and magnificent, now crumbling and diminished.

The second is a $2.3-billion, research-oriented "superhospital" financially attached to McGill University.

Prince has long campaigned for representatives from the community to be involved in the planning procedure and to secure local employment at the yet-to-be-completed hospital. He also advocated for fewer cars on the Turcot.

Real estate agents, developers, and people with private-industry interests are the typical city politician in Montreal and across Canada, according to Prince.

"What's happening now is people without those vested interests are coming in, people from different disciplines," he said. "What we're going to see is newer, fresher approaches."

A first in the Hasidic community

Mindy Pollak, a candidate for borough council in the Outremont neighbourhood, is emblematic of the diversity Projet Montréal is bringing to civic politics.

She defies many of the clichés associated with politicians, including their reputations as hand-shakers.

When I stuck out my hand to greet her, she apologized and said she couldn't. As a Hasidic Jewish woman, physical contact with men who are not family is forbidden. But she laughed it off.

Pollak, a 24-year-old hairstylist, may be the first Hasidic Jewish woman to ever run for office anywhere in the world. She manages to balance an acknowledgment of how seismic her decision is with a certain nonchalance about it. Her shoulders bear the weight of history, but with a shrug.

Mostly, she is concerned with improving communication between the Hasidic people of this area and other residents here.

"Communication" is a platitude oft-used by politicians, but in this neighborhood, the concept has real and concrete meaning. Over the past several years, tension has grown between the Hasidim and other members in the community. In 2011, Pierre Lacerte, a fierce secularist in the Quebec style and particularly anti-Hasidic, initiated a referendum against the proposed expansion of a synagogue in the neighborhood. 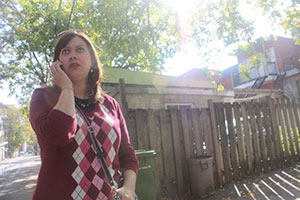 Mindy Pollak was handpicked to run in her largely Hasidic borough.

The referendum was bitterly contested, with the synagogue expansion being narrowly defeated. It was after this referendum that Pollak started going to borough council meetings and advocating for the interests of her community.

She and another neighbor, Leila Marshy, tried to balance all the rancor with a Facebook group called "Friends of Hutchison Street," named after the street on which the synagogue was to be expanded.

Her advocacy caught the attention of Alex Norris, a Projet Montréal borough councillor from neighbouring Mile-end, which also has a large Hasidic community. "A number of us were impressed with her and Leila Marshy's initiative," he said, after which he approached her about running for office with Projet Montréal.

Pollak's candidacy took on increased significance after the recent Parti Quebecois-proposed Charter of Quebec Values, which would seek to restrict public servants from wearing "ostentatious" religious symbols at work. Politicians would be exempt if the bill becomes law, but the debate it ignited has recast an old debate about secularism and nationalism in Quebec.

Pollak said she recently received a Facebook message from a pro-Charter resident, telling her that she needed to have more respect for the history of "those that welcomed her," referring to the Quebecers who lived through the Quiet Revolution and the cutting of ties between the state and the Catholic church.

"I'm sorry, but nobody welcomed me. I was born here," Pollak said.

'Take back our cities'

Projet is the type of party where a Hasidic woman and an openly gay woman can run under the same banner.

The daughter of a miner from Thetford Mines in rural Quebec, Mary Ann Davis has had an interesting career arc.

From working in women's centers in Montreal's East End, to a chef in high-end restaurants, to a union organizer, and now borough mayoral candidate, Davis has seen a lot. After leaving Thetford Mines and after a stretch in Quebec City, Davis came to Montreal for the "grandeur" and "openness" of the city, and has been living in the largely residential neighborhood of Verdun for 22 years.

Davis says her experience with activism in a variety of spheres has educated her on a range of issues: anti-poverty, social housing, LGBT rights and homelessness. It shows. She speaks about the issues affecting the neighbourhood with an authority and avoids platitudes in her speech. 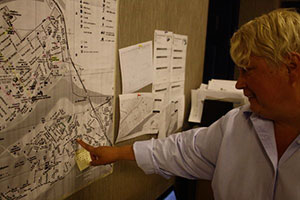 "We never thought that people like us could go into politics," says borough mayoral candidate Mary Ann Davis.

Davis is intimately familiar with the nitty-gritty issues of her neighborhood -- the need for a new primary school, social housing and better public transportation. She is also a rarity in Montreal politics, running as an openly gay woman.

She says she dislikes it when politicians try to distance their sexuality from their politics. "They say, 'Oh, it's my private life.'" For her, it's not.

For Davis, the "creativity" of Projet Montréal has cracked city politics wide open. "We never thought that people like us could go into politics," she said.

Her borough team of candidates includes a community activist, an architect, a documentary filmmaker and an art gallery owner -- all first-time candidates.

Davis says the "project" implied in Projet Montréal's name is one of reclamation. What can the rest of Canada learn from her party?

"Take back our cities," she said, "and go back to the basics of what's important."