Less than a day after Adrian Dix announced he's stepping down as leader of the British Columbia New Democratic Party, a long list of potential candidates is emerging. 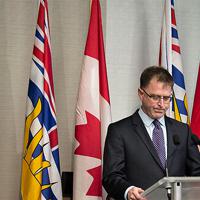 "Pretty much anyone you ask right now is going to say they're considering it," said David Eby, the MLA for Vancouver-Point Grey who beat Premier Christy Clark to win the constituency in May.

Names at the top of the list include MLAs Mike Farnworth and John Horgan who placed second and third respectively in the 2011 race Dix won. Also frequently mentioned are MLAs Eby, George Heyman, Rob Fleming and Spencer Chandra-Herbert.

There's speculation about mayors like Vancouver's Gregor Robertson or Victoria's Dean Fortin seeking the job. And there's talk that federal members of parliament Nathan Cullen, Jinny Sims and Peter Julian might be interested.

"Hopefully we'll have a diverse range of candidates, and anyone who's a member of the NDP can run for the leadership," he said.

Asked if a leader who can demonstrate a clear break from the NDP's time in government in the 1990s is needed, Dix said, "I think we have to address the history of our province and the history of our party with honesty and openness. We've got outstanding people who served in that government who will continue to be a big part of the NDP, and we've got new people, and I don't think anybody should be excluded from the discussion."

He said yesterday he hopes a new leader can be chosen by mid-2014 at the latest, and that he will stay at the helm until then.

Dix's departure presents an opportunity for renewal and will allow for a constructive NDP convention in November, MLA Farnworth said yesterday.

Speaking a few minutes after Dix's resignation, the current finance critic and former cabinet minister said that he's considering another bid for leadership.

"I'm going to be talking with my colleagues and talking with my members of the party, because to me what's important is that the next leader has the ability to lead to the next election," he said.

"I'm thinking a lot about it, obviously," said energy critic and NDP house leader John Horgan. "I've been contacted by many people who supported me last time and some who didn't encouraging me to run."

There are different factors than last time, said Horgan, including that the campaign is likely to be an eight or nine-month marathon compared to the already "interminable" four months it took to pick a new leader in 2011.

He said he also needs to think about what's best for his family and how best to serve his community. "It may well not be as leader of the Opposition," he said. "If the majority of people I talk to think it's a good idea, I'll probably do it. If they don't, I won't."

Horgan said he has strong views he wants to champion and a direction he'd like to see the party go. "The NDP needs to talk about sustainable development the way we did in the past," he said. "We need to talk to working people again."

Where are the women?

MLA George Heyman is considering a run and he's beginning to articulate a platform.

The NDP needs to communicate "a really clear vision" of how to address the issues that face British Columbians, said Heyman, who was first elected in 2013 in Vancouver-Fairview. That means talking about good jobs, green jobs, environmental preservation and climate change -- and taking the conversation beyond environment pitted against jobs.

"If we do that well, I think we'll attract people who've tuned out and aren't voting."

Heyman said he supports changing the voting system, and the NDP should put forward a platform that attracts the votes of Green Party supporters or others who would like a new electoral system.

During the 1990s, when the NDP formed the government, Heyman was president of the BCGEU, which represents much of the provincial public service. In that role he was a vocal critic of the government, a strong negotiator and showed skill at finding win-win solutions, he said.

The NDP lost in May because it didn't do an effective job pointing out the BC Liberal government's failures, he said.

In 2011, no women entered the race to succeed Carole James as leader and so far there seems to be few women's names in the nascent discussion.

The next leader may come from academia, the public service or anywhere, said Horgan. The process should be open and serve to strengthen and renew the party, he said.

"There's a lot of talented people in the caucus and any of them could step forward and make a good argument, and I won't pre-judge that in any way."