North America's vast carbon emissions -- and the pressing need to limit them -- are invigorating a cultural debate among those who advocate urgent change. At its heart are profound disagreements over efforts to block the Keystone XL pipeline. 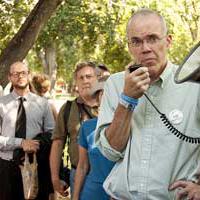 Last week The Tyee reported on those who worry the anti-pipeline fight led by author and activist Bill McKibben is polarizing, distracting and ultimately unhelpful as a climate change solution.

After that story ran, The Tyee spoke at length with Phil Aroneanu, who as U.S. campaign director and co-founder of the global advocacy group, 350.org, is one of the Keystone XL campaign's lead strategists.

Those experiences have led Aroneanu to believe that reaching out to climate deniers is "a waste of our time." So is negotiating with the fossil fuel companies he believes "speak out of both sides of their mouth."

In an incisive and provocative interview with The Tyee, here's what else Aroneanu had to say about what it will take to solve global warming, and how the campaign to block Keystone XL is anything but a "distraction."

On building a social movement

"With an issue as big as climate change the only thing that will be able to arrest it will be a massive social movement -- not just in the U.S., but globally.

"You need to have people get out into the streets. A lot of climate change activism previous to [350.org] had been educational or science-focused or wonky or really political.

"In some ways, saying that 350.org created a movement [around climate change] is a little bit of a misnomer. I would say that we in some ways give voice to and organize a movement that's already out there."

On the irrelevance of climate deniers

"The way that we organize is not to try to convince every climate denier conservative that building the [Keystone XL] pipeline is a bad idea. That would be a waste of our time.

"[Our strategy is] building up a large, passionate and committed constituency focused on the issue of climate change.

"If you spend your time organizing and engaging your active allies and passive allies and people on the middle, then you actually are able to pull the whole spectrum in your direction.

"You're shifting the actual terms of the debate so your opponents who are louder and more polarized are actually fewer and less powerful because they're more isolated on the other side of the spectrum."

On why Keystone XL isn't a distraction

"The fact that we're campaigning on Keystone has brought in tens of thousands of people to the climate movement who've never been a part of it before. They're now concerned not just about fracking and Keystone but carbon emissions writ large.

"I don't think Obama would have made [his major June climate speech] had we not been on his tail about carbon emissions and the Keystone pipeline.

"That's been the whole point of the campaign: to prevent carbon from entering the atmosphere but also to compel President Obama and other politicians to take climate change seriously."

"At this point it's a bit of a running joke because privately behind closed doors they're able to finance anti-climate legislation in Canada and the U.S. and basically speak out of both sides of their mouth.

"Until we are able to strip their social license and make it impossible for those companies to contribute to politicians who then vote against any kind of clean energy or climate regulations then it's basically a moot point."

On the Breakthrough Institute, a green group critical of the fight against Keystone XL

"Their theories are interesting but I think they're fundamentally incorrect.

"They see natural gas as an opportunity. We don't. They think that fossil fuel companies will come to the table, and that investing tons of money into clean energy research and deployment is the only way to [solve climate change]. And we fundamentally disagree.

"We think the fossil fuel industry is the richest industry in the history of money, and that they're going to make sure they extract every last drop of oil, gas and coal unless we stop them."