The Mackenzie River Basin, which occupies and protects one-fifth of Canada's fresh water, could be severely destabilized by climate change as well as unbridled resource extraction, including hydraulic fracturing, hydro dams and oil sands mining. 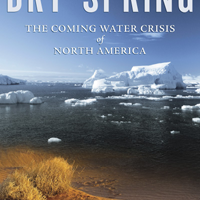 The Case for Selling Our Water

That's the uncomfortable conclusion of a new report by the prestigious University of California-based Rosenberg International Forum on Water Policy on what it calls "Canada's northern Amazon."

It also calls for economic limits to development that give "due consideration" to the basin's essential water-making and carbon saving ecological services.

The Mackenzie River, the longest flowing northern river on the continent, meanders through an expansive northern boreal forest and muskeg. The storied basin, the scene of gold rushes and oil booms, occupies parts of three provinces and two territories -- an area three times the size of France.

In addition to being a globally important carbon sink, fish maker (53 species), climate regulator and home to many First Nations, including the Dene, the basin performs essential ecological services that make it globally significant, adds the report.

The report describes the fabled region as "a lynch-pin holding the ice-water-weather-climate nexus of the continent together."

As a freshwater maker and manager, the Mackenzie supports some of Canada's largest lakes and several celebrated rivers, such as the Peace, Laird, Slave and Athabasca. As such the basin influences ocean currents in the Arctic, which, in turn, moderate global climate patterns.

"I was surprised if not alarmed by the loss of ice and permafrost in the region," Rosenberg chair and report author, Henry J. Vaux Jr., told The Tyee.

"It takes 100,000 years to make permafrost and now we are prepared to let that disappear in decades?" asked the well-known resource economist.

"We have to manage this system in an integral and adaptive way."

That's what First Nations in the region want but that's not the Canadian way, says aquatic scientist and report contributor, David Schindler. The celebrated scientist has spent much of his life studying northern waters. 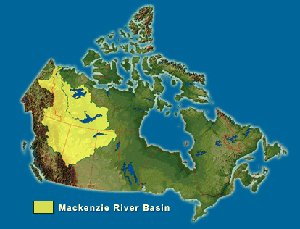 "We are still treating the region with a peculiar Canadian frontier mentality. We've used up everything in the south and now we think we can go over the horizon and mine the basin. That's not what First Nations support. They believe in the precautionary principle," Schindler told The Tyee.

"In the long term, economic development and climate change could eat up the entire system."

About half of the report documents how climate change, driven by civilization's relentless consumption of fossil fuels, has grossly undermined the geography and hydrology of the region.

In particular, the erosion of permafrost, which stores enormous amounts of greenhouse gases, could destabilize northern communities with the tilting and bucking of infrastructure as well as release dramatic amounts of methane, a greenhouse gas more potent than carbon dioxide.

"Warming in the Mackenzie Valley is causing more permafrost to melt, which releases greenhouse gases and lowers albedo, causing more warming. These self-reinforcing chains of reactions are also accelerating in the region of the Beaufort Sea," warns the report.

The unprecedented loss of sea ice and snow, which reflects energy back to the sun, means more energy is absorbed by the land and therefore contributes to warming too.

The basin's ice cover in the Beaufort Sea also acts as a refrigerator or air conditioner for the hemisphere. As the ice disappears, the western mountains and southern part of the continent will get hotter and drier.

"There is not a person on Earth who is not affected by what ice does," notes the report.

The boreal forest, a natural water manager, also moderates climate by influencing water availability and storage. But climate change threatens to diminish both the size and function of the forest and therefore the region's entire health.

"The threats posed by global warming mean that the resiliency and capacity of the Basin for self-repair are in jeopardy," said Vaux Jr.

"A major breach of a tailwater pond dike could threaten the biological integrity of the lower Athabasca River, the Peace-Athabasca Delta, Lake Athabasca, the Slave River and Delta, Great Slave Lake, the Mackenzie River and Delta, and perhaps also the Beaufort Sea. It would have an unprecedented effect on human society in the Northwest Territories," says the report.

Hydroelectric projects, such as British Columbia's proposed Site C dam to subsidize natural gas extraction (the basin's hydroelectric potential is greater than the rest of the country combined), also pose a formidable challenge to the region's ecological health.

The report says that changes in federal legislation which removed the Slave River from federal stewardship under the Navigable Waters Act will make it easier to build a run-of-river project to provide more electricity to support oil sands expansion in Alberta.

"Should these proposals come to fruition, their implications for the environment of the downstream Mackenzie Basin, as well as its tributaries, could be significant."

Schindler told The Tyee that dozens of studies have now shown how northern dams such as the Peace River (W.A.C. Bennett) dam have undermined wetlands, deltas and aboriginal communities. "Hydroelectric dams do not provide good clean power."

The report says that neither Alberta nor B.C. should be making unilateral decisions about water usage in the basin: "In order to protect the larger system for the benefit of all who share its water -- and to fulfill local obligations to the management of a globally significant resource -- decisions made regarding these developments cannot be made unilaterally by the jurisdiction in which such developments have been proposed."

In addition to recommending comprehensive monitoring and the democratic inclusion of First Nations people in all decision- making, the report proposes a rigorous bond program for all mining projects including minerals, shale gas and oil sands.

Extractive industries "should be required to post a significant performance bond before site development and operations commence. This ensures that clean-up costs and mitigation following closure of the site are fully paid by the industry itself. Failure to require a significant performance bond or some similar incentive almost surely means that the legacy of despoiled environments, toxic wastes and other waste will continue unabated, and that taxpayers will be left to bear costs that are properly those of the mining industry."

In the basin, British Columbia's heavily subsidized fracking industry and Alberta's oil sands industry now pay virtually nothing for city-scale water withdrawals. Both industries post inadequate or no bonds for the clean-up of contaminated sites or polluted water.

According to the auditor general, as many as 22,000 abandoned mining and industrial sites now represent an outstanding $8-billion contamination liability for Canadian taxpayers.

"I thought Canada would be one of the last places on earth to go anti-science. It's appalling," said Vaux Jr. "Our report is fundamentally a science report. It speaks to things that government needs to do."

If the federal government fails to support comprehensive monitoring and local decision-making, "there will be significant opportunities lost," added Vaux Jr.

The Northwest Territories, which actively educates and trains First Nations for environmental monitoring in the basin, is light-years ahead of B.C. and Alberta, added Schindler.

"I'm going to wave around the report as an example of what Alberta needs to do," said the scientist.

The Rosenberg Forum, founded by the Bank of America in 1998, promotes the study of water conservation and policy around the world.

Previous reports have been highly critical of water management and monitoring in Alberta.