British Columbians returned the BC Liberal Party to power this week, but the team that will be assembling in Victoria is very different from the one before the election. 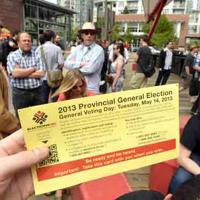 It's a point not lost on Christy Clark, who for the first time since becoming premier will be working with a team she's had a hand in shaping.

"It's easier when you're leading your own team," she said during a press conference the afternoon after winning an unexpected victory. She noted that she became leader at a point when the party was coming out of a period of turmoil. "I think we're all going to be rowing in the same direction from now on."

The party had won the 2009 election on a fudged budget, then introduced the HST in exchange for $1.6 billion from the federal government, leading to a public uprising and the resignation of Clark's predecessor Gordon Campbell.

Clark won the leadership with the support of just one sitting MLA, Harry Bloy, and in the months before going to the polls faced criticism from several Liberal MLAs, a significant number of whom had decided not to run again.

Half new, half returning

"Let me start by saying how proud I am of the team I ran with this election," Clark told reporters. They worked hard and presented a consistent vision on jobs, fiscal responsibility and paying off the province's debt, she said. "All of them want to be there and all of them fought hard to be there."

Significantly, the 50 BC Liberal's elected according to the preliminary count included 25 veterans of the legislature and 25 new MLAs. The returning veterans include party anchors like Rich Coleman, Shirley Bond and Mike de Jong.

And the new MLAs include a dozen or so who it's easy to imagine in cabinet, including Darryl Plecas, Mike Bernier, Greg Kyllo, Peter Fassbender and Andrew Wilkinson.

In contrast, the NDP's 33 elected MLAs include just six who are new, with the other 27 returning. Fresh NDP faces include likely strong performers Judy Darcy, George Heyman and David Eby.

The Green Party elected its first ever MLA in Andrew Weaver and independent Vicki Huntington was re-elected.

"The vigour and the appetite of the group of MLAs that have been elected this time is going to be unparallelled," said Clark. "A lot of people would say it's time for renewal in British Columbia." There was also a desire to renew the BC Liberal party, she said. "You can't do that without new candidates."

Clark said she'll meet early next week with all elected Liberal MLAs. The final count of the ballots will begin on May 27.