[Editor's note: Regular Tyee contributor Jude Isabella is filing reports to The Tyee from the American Association for the Advancement of Science annual general meeting in Boston this year.]

Harry Klee grows tomatoes. Thousands and thousands of them. A professor in the horticultural science department at the University of Florida, he's grown hundreds of varieties, trying to produce a tomato that combines the taste of heirloom tomatoes and the robustness of the modern tomato. It's just going to take a while. 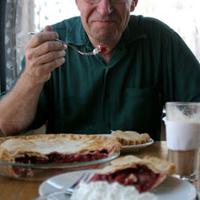 Why We Pay Too Little for Well Travelled Food

"If I could do genetic engineering and it was cheap, we could have a better tasting tomato today," says Klee, sitting in a plastic stackable chair at the Hynes Convention Center in Boston, enthusiastic despite the early hour. "But it costs something like $15 million to get a registration for a GMO. So we're taking a traditional approach. We know genetics are out there for improvement because the really old tomatoes taste good."

It's a matter of reaching back about a century to find those genes.

Research by Klee and his colleagues published last year detailed what makes a great tasting tomato. They identified 30 or so chemicals critical to flavour, a diverse group of chemicals at the mercy of a host of environmental factors -- it's just too complicated for breeders to reproduce a consistently good tasting tomato year after year. In fact, it's tough for the home gardener to save seeds and produce an heirloom that tastes the same year to year.

So Klee turned to molecular assisted breeding and with the tomato genome published by the Tomato Genome Consortium last year as well, the road to improved tomatoes is shorter than it was a few years ago. Just as researchers track mutations in the human genome for disease, Klee tracks the tomato genome for flavour, isolating DNA, running samples through high-tech gear that amplifies DNA fragments, allowing researchers to read the genetic code of any given tomato. It's easy and relatively cheap these days, but still time consuming.

Klee plays with about a dozen or so genes from tastier varieties, like German Queen, to bring the yum-factor back to one of the most popular vegetables in the world. (Yes, the tomato is a fruit, but it's called a vegetable because the U.S. Supreme Court said so in 1893.) The leading producers globally include the U.S. and China, a country that now outstrips the U.S. in production although it jumped on the bandwagon relatively late, going industrial tomato-crazy just about a dozen years ago. For those two countries, fresh and processed tomatoes add up to $2 billion in annual farm cash. Canada is the leading producer of greenhouse tomatoes in North America, with Ontario growing the most, followed by B.C. with a total farm gate value of $385 million a few years ago. This is big business.

It's not that Klee is interested so much in farm profits as in human health.

"Flavour," he says, "relates to health." For North Americans, fresh or processed tomatoes are probably the primary delivery system for dietary Vitamin A. To get people to eat more vegetables, they all need to taste better, and Klee ultimately see this kind of research crossing over to other fruits and vegetables that seem to have lost their lustre after years of intense breeding for traits like shipability, disease resistance, and higher yields. Like Italian food chains, tomatoes have fallen victim to their own popularity -- they're bland.

"Here's the dirty underbelly of the industry," Klee says, sitting back in his chair and folding his arms. "The growers right now are not paid to produce a tomato that tastes good. They're paid for the number of pounds of round red objects they put in a box. It's not totally true of people at farmer's markets; you can buy some decent tomatoes there."

As far as B.C.'s greenhouse tomato industry, Klee dismisses the tomatoes as having zero genetic potential. Campari tomatoes are about the only varieties found in a grocery store that the tomato wizard gives a seal of approval. "They're a hell of a lot better than the ones in the big bins that cost a $1.50 a pound."

Klee calls it a disconnect between developers and consumers: tomatoes are bred for growers, not eaters. He aims to change that, although breeding a plant with high yields of good-tasting tomato is more difficult than improving the fruit for home gardeners. Oh yes, homegrown tomato snobs, those who refuse to buy tomatoes out of season, there is something in this for you. (Klee, by the way, thinks the seasonal eating thing is not something most people will do voluntarily.)

"For tomatoes, I like to draw the analogy of wine," Klee says, adding that B.C. has great wine, something he knows first hand from being on an advisory panel for the University of British Columbia's Wine Research Centre. "You can grow chardonnay grapes anywhere, from British Columbia to Chile, and you can produce wine: some are good some are terrible. Same grapes but it's the 'terroir.' Where you grow it, the soil, environment, microclimate -- all of it influences the quality, even the best vineyards are not going to the same great wine each year."

Like wine, tomatoes need some stress, not too much water, not too much fertilizer, and they like heat. And while the Pacific Northwest of North America is traditionally a bad place to grow tomatoes, a seed that combines the traits from tasty heirlooms with firm, pretty flesh of modern tomatoes would mean a fruit -- sorry, vegetable -- that doesn't split and fall off the vine when gardeners turns their backs for one second to pick some basil. And, for home canners, it means fewer blemishes to cut away and more tomato making it into the jar.

Seeds for the home gardeners might make it to the market in about a year and a half or so. Klee and his colleagues will be harvesting seeds in June. They're currently in talks with seed companies for production. If that doesn't work out, they'll sell the hybrid (currently nameless) through the University of Florida, like Rutgers University does with the Ramapo tomato.

In the meantime, Klee, who has a summer home on Vashon Island, and lived in Seattle for years when he worked at the University of Washington, has two words for gardeners: Maglia Rosa. A tomato breeder in Berkley, California developed the Maglia Rosa looking for a tasty tomato that would grow in a cool-ish climate.

"They taste really good," Klee says, checking his watch; his presentation is in half an hour. "All the students who help us harvest go right for them and eat them. They're a nice variety, bred specifically for flavour."

Tomato lovers, Harry Klee has got your back.

Stay tuned to The Tyee for more science summit reporting by Jude Isabella.