The freckled teenager looks directly across the room at the panelists reviewing the Northern Gateway pipeline. "Some day when I have kids and they look me in the eyes and ask, 'What the hell were you thinking? Why didn't you do anything about this?' I know I'll be able to look them back in the eyes with absolute confidence and say, 'I'm sorry. I tried my very hardest.'" 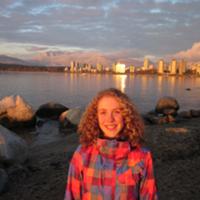 The surreptitiously recorded video of Sam Harrison's oral statement to the Joint Review Panel has been zipping around on social media for the past week, propelled by the likes of Naomi Klein, the David Suzuki Foundation and VSB Chair Patti Bacchus.

Harrison isn't limiting his focus to pipelines. On Thursday when school let out, he marched with several dozen placard-waving teenagers to the offices of the Port of Metro Vancouver. Their group, Kids for Climate Action, wants to stop the self-proclaimed "Greenest City" from turning into the largest coal exporter in North America.

The Tyee caught up with Harrison after the rally. And as we prepared this for publication, it dawned on us that Sam's sister Sophie wrote a piece on a similar theme published by The Tyee in December 2010. It's a family thing, as you'll learn in the following interview (which has been edited and condensed).

Tyee: Okay, vital statistics. You're sixteen, in Grade 11, at what school?

What do your parents do?

So what was going through your head during that presentation to the JRP?

I was an odd combination of nervous and really excited. It was great to have an opportunity to have my voice heard and express my opinions. I found the members of the panel to be surprisingly friendly.

How have people reacted to the video?

The majority are positive, but there has also been a fair share of angry people -- some a little crazy -- who are convinced that because I'm a kid I'm being used as a puppet by adults who wrote it for me. One person said I was in a cult! I've learned two big things: there are a massive number of really pleasant, nice, sympathetic people out there, and if you want to find angry, impolite people on the Internet, the comments section of a Globe and Mail article is the place to be.

How did you get into climate activism?

Because of what my parents do (UBC professors George Hoberg and Kathryn Harrison), this stuff has always been dinner table conversation. My sister Sophie was the one with the idea to organize a youth rally prior to the 2010 Cancun climate summit. We got about 40 people out. It's fair to say it wasn't our most successful event. We try to learn what does and doesn't work, and we've been working ever since!

How did you become leader of Kids for Climate Action?

I don't necessarily like to think of myself as the leader. I'm not at the top of the pyramid; I'm just someone helping coordinate the actions and cooperation of others. The role was passed down to me by my sister Sophie after she left for university. It's a high school group, and I was the one with the most experience at the time.

What's the moment you're most proud of with K4CA?

The Ride for our Future this year was really cool. We got 40 people and bikes from Vancouver to Victoria to deliver a petition to be presented in the legislature. Aside from getting a cabinet minister to read a petition for us in the legislature and getting lots of good media, it was just a great day trip with a fun group of people.

Who do you most want to hear your message?

Voters! I'm 16 and can't vote. People in office aren't political leaders, they're followers. They follow what there constituents want, which mean we have to make it clear to them that voters want action on climate change.

Why should they listen to you?

Because we're kids. We are the ones who are inheriting the risk of our current decisions. They owe it to us to make these decisions with our future in mind.

Why were you marching on the port offices on Thursday?

Late last year a proposal was put forward to expand coal exports out of Vancouver by 14 million tonnes. This would bring the total to 100 Mt of CO2 in coal exports every year -- more than six times what we emit as a city, or one and a half times what we emit as an entire province. The port has already approved an increase of six million tonnes out of the Neptune terminals, and they're considering a proposal to export another eight million tonnes of coal per year out of Fraser Surrey Docks.

The federal government says the port's mandate is to "act with broad public support in the best interest of Canadians." I say contributing to irreversible damage to our planet's atmosphere is neither supported nor in our best interest.

What do your friends and teachers think of your work on climate issues?

The reception is generally quite good. I feel some of my friends are a little annoyed by my pestering to have them come out to K4CA events.

What makes you frustrated?

What gives you hope?

Seeing youth with the same interests as me and the passion they hold. It's days like Thursday, at the port office, that make you feel like you're not alone at all, but part of a small, committed group of young citizens doing their best to change the world.

Where do you want to be in five years?

In five years, I predict I will be in fourth year university. I would like to continue with my activism, and get a good education to back it up.