Take The Tyee's Crash Course in Climate Change, eight easy lessons plus a quiz and, if you pass, a certificate declaring you to be a citizen climate change scientist. Click here to find the entire course.

[Editor's note: A new draft report from the U.S. National Climate Assessment and Development Advisory Committee surveyed thousands of scientific studies to summarize what has already changed in the climate affecting the United States. Much of what they found is also relevant to Canada. The following excerpts are adapted from the report with the NCADAC's permission.]

Global climate is changing now, and this change is apparent from the top of the atmosphere to the depths of the oceans. The sum total of this evidence tells an unambiguous story: the planet is warming.

Temperatures at the surface, in the troposphere (the active weather layer extending up to about 20 kilometres above the ground), and in the oceans have all increased over recent decades. Snow and ice cover have decreased in most areas. Atmospheric water vapour due to increased evaporation from the warmer surface has been increasing in the lower atmosphere, as have sea levels. Changes in other relevant indicators such as growing season length have been observed in many areas. Worldwide, the observed changes in average conditions have been accompanied by trends in extremes of heat, cold, drought and heavy precipitation events.

Heat waves are periods of abnormally and uncomfortably hot weather lasting days to weeks. Heat waves have generally become more frequent across the U.S. in recent decades, with western regions (including Alaska) setting records for numbers of these events in the 2000s.

Recent prolonged (multi-month) extreme heat has been unprecedented. The 2011 and 2012 events set records for highest monthly average temperatures, exceeding in some cases records set in the 1930s, including the highest monthly temperature on record (July 2012, breaking the July 1936 record); for the spring and summer months, 2012 had the largest area of record-setting monthly average temperatures, including both hot daytime maximum temperatures and warm nighttime minimum temperatures. Tree ring data suggests that the drought over the last decade in the western U.S. represents the driest conditions in 800 years.

Research has found that the human contribution to climate change approximately doubled the probability of the record heat in Texas in the summer of 2011. So while this Texas heat wave and drought could have occurred naturally, the changes in climate are increasing the likelihood for these types of severe events.

Corresponding with this increase in extreme heat, the number of cold waves has reached the lowest levels on record. In the past three to four decades in the U.S. the ratio of record daily high temperatures to record daily lows at about 1,800 weather stations in the 48 contiguous United States has increased from about 1:1 in the 1950s to about 2:1 in the most recent decade. This ratio is now higher than the ratio of 1.6:1 in the 1930s, mostly due to the rapidly declining number of low temperature records.

During this same period there has been an increasing trend in persistently high nighttime temperatures. In some areas, prolonged periods of record high temperatures associated with droughts contribute to dry conditions that are driving wildfires. 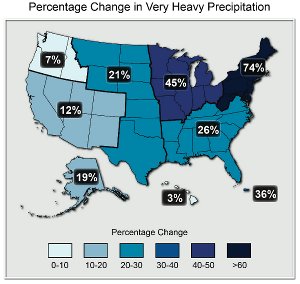 Since 1900, average annual precipitation over the U.S. has increased by roughly five per cent. This increase reflects, in part, the major droughts of the 1930s and 1950s, which made the early half of the record drier.

There are important regional differences. For instance, precipitation since 1991 (relative to 1901-60) increased the most in the Northeast (eight per cent), Midwest (nine per cent) and southern Great Plains (eight per cent), while much of the Southeast and Southwest had a mix of areas of increases and decreases.

Heavy downpours are increasing in most regions of the U.S., especially over the last three to five decades. Since 1991, the amount of rain falling in very heavy precipitation events has been above average in every region of the country, except Hawaii. This increase has been greatest in the Northeast, Midwest and Great Plains -- more than 30 per cent above the 1901-60 average.

Warmer air can contain more water vapour than cooler air. Global analyses show that the amount of water vapour in the atmosphere has in fact increased over both land and oceans. Climate change also alters dynamic characteristics of the atmosphere that in turn affect weather patterns and storms. In the mid-latitudes, there is an upward trend in extreme precipitation in the vicinity of fronts associated with mid-latitude storms.

In general, heavier rains lead to a larger fraction of rainfall running off and, depending on the situation, more potential for flooding. While a two-inch rain may not cause major impacts in the Southeast where such an event can occur several times a year, it can be disastrous if it occurs in the northern Great Plains.

In the U.S., flooding in the northern half of the eastern Great Plains and much of the Midwest has been increasing, especially over the last several decades. Flooding has decreased in the Southwest, although there have been small increases in other western states. In the areas of increased flooding, increases in both total precipitation and extreme precipitation are contributing to the flooding increases.

There has been an increase in the overall strength of hurricanes and in the number of strong (Category 4 and 5) hurricanes in the North Atlantic since the early 1980s. These increases are linked, in part, to higher sea surface temperatures in the region that Atlantic hurricanes form in and move through.

Over the U.S., changes in winter storm frequency and intensity are small and not significant, with the exception that there is limited evidence of an overall increase in storm activity near the northeast and northwest U.S. coastlines during the second half of the 1950-2010 period. However, for the Northern Hemisphere as a whole, there is evidence of an increase in both storm frequency and intensity during the cold season since 1950, with storm tracks having shifted slightly towards the poles.

Rising temperatures are reducing ice volume and extent on land, lakes and sea.

Since the satellite record began in 1978, minimum Arctic sea ice extent (which occurs in early to mid September) has decreased by more than 40 per cent. This decline is unprecedented in the historical record. The 2012 sea ice minimum broke the preceding record (set in 2007) by more than 200,000 square miles (517,997 square kilometres). It is also notable that the ice has become much thinner in recent years, so its total volume has declined even more rapidly than the extent.

Ice loss increases Arctic warming by replacing white, reflective ice with dark water that absorbs more energy from the sun. More open water can also increase snowfall over northern land areas and increase the north-south meanders of the jet stream, consistent with the occurrence of unusually cold and snowy winters at mid-latitudes in several recent years.

Glaciers are retreating and/or thinning in Alaska and in the lower 48 states. In addition, permafrost temperatures are increasing over Alaska and much of the Arctic. Thawing permafrost releases carbon dioxide and methane, heat-trapping gases that contribute to even more warming. Methane emissions have been detected from Alaskan lakes underlain by permafrost, and measurements suggest potentially even greater releases from the Arctic continental shelf in the East Siberian Sea.

In the Great Lakes, total winter ice coverage has decreased by 63 per cent since the early 1970s.

Global sea level has risen by about eight inches (20 centimetres) since reliable record keeping began in 1880. Proxy data have shown that this rate of sea level rise is faster than at any time in at least the past 2000 years. Since 1992, the rate of global sea level rise measured by satellites has been roughly twice the rate observed over the last century, providing evidence that the current rate is faster still. 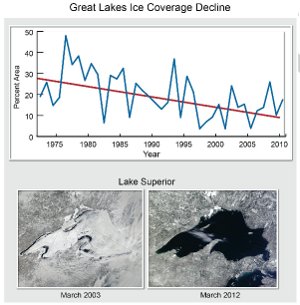 The oceans are becoming more acidic, leading to concerns about potential impacts on marine ecosystems.

As human-induced emissions of carbon dioxide (CO2) build up in the atmosphere, excess CO2 is dissolving into the oceans where it reacts with seawater to form carbonic acid, lowering ocean pH levels ("acidification") and threatening a number of marine ecosystems. Over the last 250 years, the oceans have absorbed 530 billion tons of CO2, increasing the acidity of surface waters by 30 per cent. The current observed rate of change is roughly 50 times faster than known historical change.

Regional factors such as coastal upwelling, changes in riverine and glacial discharge rates, sea ice loss, and urbanization have created "ocean acidification hotspots" where changes are occurring at even faster rates. Observations have shown that the northeastern Pacific Ocean, including the arctic and sub-arctic seas, is particularly susceptible to significant shifts in pH and calcium carbonate concentrations.

The acidification of the oceans has already caused a suppression of carbonate mineral concentrations that are critical for marine calcifying animals such as corals, zooplankton and shellfish. Many of these animals form the foundation of the marine food web. Today, more than a billion people worldwide rely on food from the ocean as their primary source of protein. Ocean acidification puts this important resource at risk.