With a majority of municipal leaders across the province throwing their support behind marijuana decriminalization yesterday, drug policy advocates are renewing their call for an end to the policing, imprisonment and social stigma against drug users -- what advocates label a "war on drugs."

As the Union of BC Municipalities (UBCM) headed into several days of debate around its non-binding motion to lighten the country's pot laws, anti-prohibition activists gathered last weekend under a big tent in Vancouver's Oppenheimer Park for The War Stops Here, with several hundred packing in to hear Canadian and U.S. research on drug law.

"We've come a long way," veteran activist Ann Livingstone told The Tyee, a co-founder of the Vancouver Area Network of Drug Users (VANDU) who spoke at Saturday's event. "There's a much more advanced discourse on the legalization of drugs amongst the public than there is amongst the politicians.

"But if you say it in a room full of politicians, it's like you've farted! No one will answer you and they all look awkward."

While pot advocates are cheering, questions remain about whether a move towards marijuana decriminalization -- which stops short of full legalization -- will in the long run help or hinder drug users' rights.

"There's two theories," Livingtone explains. "One is you need to legalize all drugs.

"If you look at overdoses, hepatitis and so on, everyone understands marijuana. But people don't necessarily understand the harder drugs that are causing overdose deaths, which are not a concern with marijuana. The other theory is that since marijuana legalization is so supported, after [decriminalizing it, the public might] say, 'Let's deal with these other [drugs] too."

Another speaker at The War Stops Here was Deborah Peterson Small, with the U.S. drug advocacy group Break the Chains. She told participants that American drug organizations look up to B.C.'s pioneering activists for their history-making work pushing for safe injection sites, needle exchanges and improved policies and treatment.

"If a lot of money is being diverted to prison-building and implementing these laws, there is less money for everything else," Boyd said. "We really have to think about that.

"The overcrowding of prisons and more arrests has already begun under the Harper government. Our drug arrests are at their highest point in 30 years. Mandatory minimum sentencing will mean more people are arrested, as we've seen in the States -- which targets poor, vulnerable and racialized communities. It's a subversion of the criminal justice system."

In her presentation Saturday at The War Stops Here, Boyd pointed to Canada's earlier opium laws -- a drug which used to be marketed, along with heroin, for over-the-counter medical uses -- which deliberately aimed to target Chinese immigrants in the early 20th century. More privileged users of recreational drugs often get a free pass from the law.

Likewise, statistics in Canada show that 30 per cent of the prison population are aboriginal, though they comprise four per cent of the population, and the majority are in jail on non-violent offences related to drugs, Boyd said.

"It's about race and class," Livingstone said. "The drug laws are poor laws.

"They pick on people that are vulnerable ... Race plays into it here, where there's a creation of an underclass that's intergenerational. Aboriginal people have the highest rates of jailing and child apprehensions."

Who can fight back?

Despite high-profile support for marijuana decriminalization from former Attorney General Geoff Plant, as well as Vancouver's current mayor and several of his predecessors, police agencies have been the most outspoken critics of reducing drug laws.

"I think we don't pay enough attention to the police," Livingstone said. "The police have a very powerful political lobby. [Politicians] advance the police budget every year, but they always complain about not getting enough.

"There's robust over-policing going on. That's a tough message to get across. They've deployed hundreds and hundreds of police into a tiny area [the Downtown Eastside]... People have this myth that you can just stand around smoking a doobie, and we can have all these policies where we won't prosecute marijuana charges -- but they'll still go after people who can't fight back." 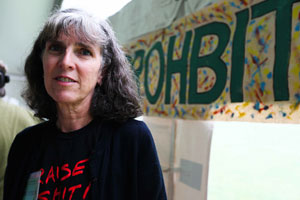 Moving the debate around drug legalization beyond marijuana is a hard sell, precisely because of many voters' discomfort with the hundreds of overdoses every year in the province from heroin and other hard drugs. But advocates of reforming drug laws point to statistics showing dramatic decreases in overdose deaths in the vicinity of Insite safe injection site, for instance, as well as lower crime rates when nonviolent drug offenders are diverted from the justice system through alternative sentencing.

Going a step further than such stopgap measures, the logic goes, would pull the rug out from organized crime's underground hold on the drug trade, offer safer and more pure forms of street drugs, and take away some of the stigma that keeps many users from seeking medical help or counselling.

"The more dangerous the substance, you can make a case it's even more important we don't allow it to kill our kids," Livingstone said. "I know parents whose kid did heroin one time and they came home and found them dead in their home."

For Livingstone, the efforts of the drug user community in B.C. are something to be celebrated.

"I'm just so grateful there's activists out there and something's moving forward," she said. "We're all waiting to see how it goes [with marijuana decriminalization]. We're still doing our campaigns."

Those campaigns -- including the 1990s formation of a drug users union, VANDU, and harm reduction experiments -- have their roots in community activism that involves users themselves, advocates say.

"We've just had so many movements and places where people have come together and really resisted federal drug policies, as well as anything that stigmatizes and criminalizes users of drugs," Boyd explained. "We have a huge history of resistance.

"I think we can stop this war in Canada if we bring individuals and groups together to make a statement and end the war on drugs."