Nearly 3,000 rectangular planter boxes, which stand out in varying shades of green and brown against a concrete parking lot, make for an impressive sight when viewed from high above on the Georgia Street viaduct. 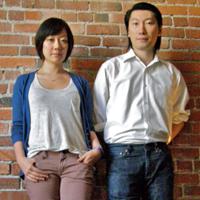 Lam and Liu, Architects for Humanity

Situated on Pacific Boulevard between the busy overpass, BC Place Stadium, and the bustling seawall at False Creek, SOLEfood Urban Farm's newest (and, at two acres, its largest) site is a highly-visible sign that urban agriculture has arrived in Vancouver.

Down below, SOLEfood co-founder Michael Ableman walks between the rows pointing out the crops: bok choy, eight types of kale and a new variety of strawberries bred in France that they're trying out.

"Most of what people refer to as urban agriculture is a step up from community gardens," says Ableman. "This is not a token thing. This is a real amount of food."

Ableman and business partner Seann Dory have been plotting the expansion since they launched their first farm on a half-acre lot beside the Astoria Hotel on East Hastings Street.

Considering that all of Vancouver's existing urban farms -- all 2.3 acres of them, according to a 2010 census -- would just about fit on SOLEfood's Pacific Boulevard site, the expansion is significant for the city's local food scene. It's also a test of the financial viability of this type of social enterprise model, which has strong ties to the Downtown Eastside community where it grew up.

So far, Ableman says he's pleased with the progress SOLEfood has made in achieving its main goal as a not-for-profit social enterprise: to provide meaningful employment for people in the Downtown Eastside who've faced barriers finding work.

The number of staff has grown from seven to 21, says Ableman, and food production is expected to go from roughly 10,000 pounds to a projected minimum of 200,000 pounds once four of the five new sites are in production this fall.

(Pacific Boulevard is one of two that have recently come into production; the other is adjacent to the train tracks under the First Avenue bridge at Clark Street. Two more sites, on city-owned land at Main and Terminal Streets and the Olympic Village, should be in production by the end of the year, says Ableman.)

The 200,000 pounds is a projection based on financial modeling that SOLEfood was required to provide to Vancity credit union and other funders, says Ableman, but it comes with a word of caution -- this is agriculture after all, a biological system based on a lot of different variables.

This kind of agriculture requires a lot of skilled labour from employees like Ken Vallee, who greets customers at SOLEfood's stand in the Main and Terminal farmers' market on Wednesday afternoon.

Vallee tells me that he's recently had surgery on two bones in his neck that fused together. At some point, sooner or later, he figures he likely won't be able to work and when that happens, going on disability will be an option. In the meantime he works part-time, 20 hours a week, at SOLEfood. The hourly rates starts at just over minimum wage, says Vallee, and increases depending on how often the individual works, and what their duties are.

Vallee is one of two employees who has been with the company since the beginning, and when he tells me he's become the poster boy for SOLEfood, I assume he means figuratively, until his colleague at the market stand jokes that he gets tired of seeing Ken's face every time he goes to the ATM.

Vallee, it turns out, is literally the poster boy for SOLEfood -- that's him on the Vancity posters you may have seen around town, promoting the kinds of initiatives the credit union funds.

Ableman emphasizes several times that employment is SOLEfood's main purpose, its raison d'etre. The company is designed to "support a payroll." That means selling the food at the highest return they can get (at the farmers' market, a bunch of radishes goes for $3.50, and a small a bag of Asian greens that would make four side salads is $5.00) and it means maintaining a certain level of consistency. They have about 30 different items, planted in succession so that harvest can happen all season. "The skill," in agriculture, says Ableman, "comes with having a continuous supply."

From threat to acceptance

And success in urban agriculture, to some degree, hinges on acceptance from the community. Twenty years ago urban agriculture was considered a threat, Ableman points out (his own battle to save Fairview Gardens Farm in Santa Barbara county in the '80s is detailed in his 1998 autobiography, On Good Land). Now, cities are embracing it.

Vancouver's city council, its business community, financial institutions and philanthropists have all played a role in getting SOLEfood off the ground.

Concord Pacific, the developer that owns much of the land on the north side of False Creek, has leased the Pacific Boulevard site to SOLEfood for three years, at no charge, in exchange for a break on property tax from the city.

Until recently, SOLEfood has been using borrowed refrigerator space at Save on Meats for its cold storage needs. Mark Brand, the restaurant's owner, offered the space for free for the company's first two years. This spring, Seann Dory and Brand both told this reporter of their plan to expand the partnership, which would require renovating the basement at Save on Meats for additional cold storage as production ramped up. In the end, that proved very expensive for SOLEfood's budget, Ableman said. Instead, they may rent portable refrigeration units to keep at the Pacific Boulevard site, an option he says is more efficient and cost-effective. They have not decided yet. 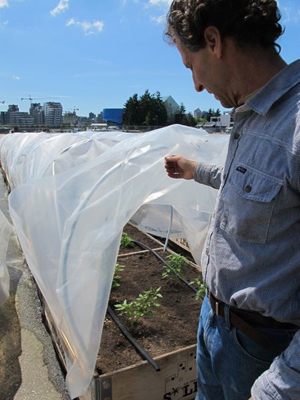 As a not-for-profit social enterprise, SOLEfood has been able to secure an impressive amount of start-up cash in a funding climate friendly towards local food initiatives. Since 2009, the company has received at closer to $700,000 in direct grants, and more in in-kind contributions.

In 2011 it received another Vancity community investment grant -- this time, $50,000 -- and an additional $44,000 from Vancity's enviroFund. That same year, the Radcliffe Foundation, established by Vancouver philanthropist Frank Giustra, granted $475,000.

Ableman told The Dependent magazine last year that its Astoria site produced $40,000 revenue in 2010. Ableman says that with all five sites in production and major capital costs covered, they intend to be entirely self-sufficient and not reliant on grants coming in. "We do project that in three to five years, we're going to be standing on our own," says Ableman. "We want this to pay for itself by the pound."

The company is testing the economics of urban agriculture in Vancouver, says Peter Ladner, former city councilor and author of The Urban Food Revolution.

Ladner told The Tyee that he had recently toured Vancouver's first indoor, vertical farming business -- Valcent, which has leased space on top of a parking garage in Gastown. It's projecting yields 20 times that of traditional outdoor growing methods -- as much as 186,000 pounds of produce per year on just 6,000 square feet.

Ladner says he doesn't know enough about SOLEfood's business model to offer an opinion on how it will sustain itself in the long term.

"If anyone can make this work," he added, "Michael Ableman can make it work."

Ableman himself is proud of what SOLEfood has accomplished so far -- the portable planters, their work on brownfields, and the employment numbers they've been able to reach. He stresses that the company is still very much a work in progress; particularly when it comes to its particular function as a social enterprise in the Downtown Eastside.

Ableman says that SOLEfood currently donates about 10 per cent of its produce to agencies in the Downtown Eastside, including the Potluck Café and the Downtown Eastside Neighbourhood House, and wants to continue this trend. With production now underway at the Pacific site, "we now have enough food to begin to really address both our marketing needs and our giveaway goals," he says.

However, Ableman also emphasizes the primary goal is employment, not giving food away "which does not always empower communities to generate food themselves."

SOLEfood is looking at other ways to get produce in the hands of low-income people. It recently launched a voucher program, funded by monetary donations from its Community Supportive Agriculture (CSA) program. Members were given the option of contributing extra when they bought their shares. A total of $430 was collected, which will be divided into $10 vouchers for the Downtown Eastside Neighbourhood House to distribute amongst its members, according to Katie Pease, SOLEfood's newly-hired sales and distribution manager.

Joy de Castro, who runs the family drop-in program at the neighbourhood house, says that these will go to families who come to the drop-in. The house -- which also runs a community drop-in that serves as many as 170 meals a day -- has bought a $500 share in SOLEfood's CSA program.

The goal is to build a larger base of shares in the Downtown Eastside, and possibly set up a distribution hub in the neighbourhood. "We don't have enough volume yet to warrant setting up a system on the Downtown Eastside, but that's the way we want to do it," says Ableman. "Otherwise, we're not going to be able to reach people."