National Aboriginal Day can be a time when politicians polish their platitudes about cooperation between nations. Yesterday there was serious money attached to the pledges of good will, as the B.C. Aboriginal community received several education-related investments, both directly and indirectly, from the provincial government. 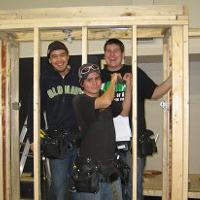 Over $20 million in funding for Aboriginal education initiatives and student funding was announced by three separate ministries, encompassing all forms of post-secondary education from adult basic ed. to vocational to masters and post-doctoral programs.

Simon Fraser University, on the other hand, didn't hand out money, but instead welcomed Aboriginal research ideas at the first meeting of the university's new Indigenous Research Institution.

But while the politicians are tying new funds and educational opportunities to the province's Jobs Plan, B.C.'s Aboriginal community sees them as the key to rebuilding a fractured community and a fractured relationship with a colonizing government.

"We're in the process of nation rebuilding, and in order to do that, we need people who are in the health field, education, architecture, absolutely everything," says Christa Williams of the First Nations Education Steering Committee (FNESC).

"So creating the space [for Aboriginal students] in the B.C. post-secondary system is critical in supporting our students to grow in order to be successful and fulfill those roles so needed in our communities so that we can become healthy."

Two press conferences held yesterday promised exciting developments for Aboriginal education in British Columbia. At Klahowya Village in Stanley Park, the Industry Training Authority (ITA), under the mandate of the Ministry of Jobs, Tourism and Innovation, announced $3 million in funding to increase Aboriginal participation in trades.

The number of Aboriginal apprentices has more than doubled in the province to 1,329 from 609 in 2005/06. But in a press release issued shortly after the announcement, Minister Pat Bell indicated increasing Aboriginal participation even more was key to fulfilling the province's Jobs Plan.

"With the anticipated labour shortage over the next decade, improved access and availability of skills training for Aboriginal people is critical," reads Bell's statement.

"ITA's programs help empower people to better reach their full potential and demonstrate the government's focus on skills training and job creation as part of the BC Jobs Plan."

At Vancouver Community College, Minister of Advanced Education Naomi Yamamoto and Minister of Aboriginal Relations and Reconciliation Mary Polak announced between them $16.2 million in funds for Aboriginal post-secondary education programming and student funding.

This new injection of money is all the more remarkable as it comes at the same time the province is asking public post-secondary institutions to reduce administrative spending by $70 million.

Developed over 18-months in collaboration with groups like the First Nations Summit, FNSEC, and the Indigenous Adult and Higher Learning Association, the Action Plan sets out five goals for increasing Aboriginal post-secondary participation: culturally relevant programming and institutions, community-based program delivery, removal of financial barriers to post-secondary education, seamless transition from secondary to post-secondary, and continuous improvement on the previous four goals.

'Aboriginal people have a lot to teach us': Polak

Polak acknowledged to the gathering of educators, students, and media at VCC's central campus, both Aboriginal and non-Aboriginal, that working with the province's indigenous community was not something the government did often enough.

"It is not the usual way we do things in government, although we're beginning to learn, and you need to know it took a very special commitment on the part of Minister Yamamoto that that was the way in which this plan came about," she said.

"[It] also addresses our Jobs Plan commitment to provide funding for additional partnerships between post-secondary institutions and Aboriginal communities," she says.

Michelle Mungall, advanced education critic for the New Democratic Party, says overall the plan and its process are positive for Aboriginal people. But she says while the government talks about supporting Aboriginal education, they recently let the federal government shut down the BC Aboriginal Mine Training Initiative in northern B.C.

"This was an extremely successful program that not only gave Aboriginal students the training that they needed for successful careers and for better income opportunities, but it filled a skilled training need that we have in this province that we're currently experiencing a shortage in, especially in the north," she says.

"The province has known for a long time that federal money for the program was coming to an end and the province didn't act, they didn't negotiate with the federal government, they didn't offer money themselves, and as a result that program has now closed."

'BC is a leader': Williams

Members of the Aboriginal community present at the VCC announcement were excited about the education plan and the opportunities it would bring to Aboriginal youth, who represent almost 50 per cent of the province's 200,000 Aboriginal people.

But the release of this plan marks more than the chance for a better education for Aboriginal people, it was the sign of a strengthening relationship between the government and indigenous peoples in the province.

"I really want to thank the B.C. Liberal government for their contribution, not only for building relationships and partnerships, but where were you when I was growing up?" joked Dan Smith of the First Nations Summit.

Williams commended the province for what she described as positive working relationship with Aboriginal groups.

"This process was different from any other process I've been involved in. it was complicated and it was slow -- 18 months -- but it was respectful," she says.

"I'd like to congratulate the B.C. government for taking this step that's not happening anywhere else in Canada, and once again B.C. is a leader in moving forward the agenda of building relationships with First Nations communities."

Smith touched upon the depletion of the province's natural resources, particularly the struggling fishery and forestry sector, saying Aboriginal youth must go into some form of post-secondary to learn to make a living in a world so different from their elders.

But he says post-secondary education shouldn't be about forgetting the old ways for new technology. Rather he says Aboriginal and non-Aboriginal students have a lot to learn from traditional Aboriginal technologies and knowledge.

"Traditional scientific knowledge of the indigenous peoples must also be recognized, supported, and reinforced. Because when we think about the fish weirs that are up and down the coast: we've carbon dated some of those fish weirs to 720 A.D.," he says.

"Those fish weirs provided an opportunity for 10,000 people to access those resources."

Simon Fraser University's (SFU) new Indigenous Research Institute could be the key to promoting traditional Aboriginal knowledge in B.C. Also launched on National Aboriginal Day, it's unlike any indigenous research institute in the country because it doesn't limit itself to just one faculty.

"Our institute is an umbrella one, actually, that covers basically all of the faculties here at SFU, those doing research in indigenous fields," explains William Lindsay, director of the University's Office for Aboriginal People.

"The institutions that were existing were basically in those three areas: education, health, or land issues. So we're a little bit different. We're also going to be reaching out to other universities to see if they would like to work along with us in different capacities. That's going to be down the road."

The institute was two years in the making, part of the University's Aboriginal Strategic Plan, Lindsay says it serves the University and government's goal of increasing Aboriginal research in the province. With over 40 SFU faculty and student members already, it's proving to be one of the more popular institutes on campus.

Already the areas of research interest have a wide range, from studying the therapeutic benefits of wood carving, to the effects of Fetal Alcohol Syndrome on youth involved with the law, to why so few indigenous students identify themselves as Aboriginal when registering for university.

Lindsay says that if the province truly wants Aboriginal students to succeed in any level of school, however, they should put funding into research, too.

"If the government is sincerely interested in improving graduation rates for Aboriginal people, at whatever level that is, then let's have some money so we can research those things large scale."