Lobbyist and Christy Clark backer Patrick Kinsella has been pushing for changes to the liquor distribution system used by the provincial government. 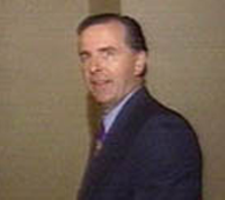 In the Feb. 21 budget the government announced it will privatize that system.

Kinsella registered as a lobbyist on behalf of Exel Logistics, "To develop a new liquor distribution system for the Province of B.C."

The registration, pointed out by a commenter on The Tyee, describes the undertaking as to do with "privatization and outsourcing" and covers from April 1, 2010 to April 9, 2013. It lists lobbyists Mark Jiles and Rob Madore as also working on the file.

Energy and Mines Minister Rich Coleman and Jobs, Tourism and Innovation Minister Pat Bell were added as targets of the lobbying on Jan. 6, 2012. Previous targets included Coleman in 2010 and Justice Minister Shirley Bond in 2011.

Coleman has held responsibility for liquor off and on over the past decade, and got it back from Bond on Feb. 8.

Kinsella's company is Progressive Strategies Ltd., which does business as The Progressive Group. Clients have included Accenture Business Services, Alcan and Canfor Forest Products. His companies were also paid $297,000 by the British Columbia Railway Co. between 2002 and 2005, the time during which the government sold the Crown corporation to CN Rail.

In 2011 Progressive Strategies donated $20,000 to Premier Clark's successful bid to lead the BC Liberal Party and news reports identified him as working on her campaign.

'I guess they were lobbying me': Coleman

The budget said the government intends "to sell its liquor distribution warehousing facilities and associated distribution services to the private sector." The economic and fiscal plan said the intention to sell had recently been announced, though that is not in fact the case.

A press release later clarified the government is planning to sell the warehouses it owns and operates in Kamloops and Vancouver. The two handle 55 per cent of the liquor sold in the province and employ 400 people.

The sale of the warehouses and other "surplus" government assets was expected to raise $707 million, which Finance Minister Kevin Falcon said would help balance the budget in 2013-2014.

The liquor distribution branch is profitable, and is budgeted to add $906 million to government revenue in fiscal 2012-2013.

Coleman said he never met with Kinsella on the liquor distribution proposal. "I don't know who he's had conversations with in government in particular. I've known Pat a long time."

Later Coleman allowed that he had met with people from Progressive representing Exel about privatizing liquor distribution. "They brought it up in the conversation, but there was no lobbying to do it. It was, this is what they thought was an opportunity for government."

Pressed by a reporter, he relented, "I guess by any definition when you come on behalf of a company you're lobbying, so I guess they were lobbying me."

Stores not for sale

Asked if the privatization announced in the budget was consistent with what Exel wanted, Coleman said, "I don't know." He's talked with the company over the years and visited their facilities in Alberta in 2001, he continued, before observing that in Alberta the government sold the government liquor stores, which is something that's not on the table for B.C.

Minister Bell said he met with representatives of Exel five or six months ago (recall the lobbyist registry said he was added as a target on the issue more recently, on Jan. 6, 2012). He said he hasn't reviewed what was actually announced, but that he guessed it was in line with what Exel sought.

Bond, who was responsible for liquor until early February, said, "Certainly we have had discussions, but as you can imagine they were done in an appropriate way." The decision was made by Finance Minister Kevin Falcon and the RFP process will follow all the normal procurement rules, she said.

"We have a piece of property there that has some value," said Coleman. "The notion was to go out and see what the market had to offer." The RFP should be out within 30 or 60 days and the process will be open and will be looked at through a "fairness lens," he said.

Coleman said Exel doesn't have an inside track and that there will likely be several bidders, including some who distribute other kinds of goods. "There are so many players in distribution," he said.

The province considered selling the government liquor stores a decade ago, but entered an agreement with the B.C. Government and Service Employees' Union not to do that after the union agreed to a wage freeze, he said. "We're not putting the liquor stores on the table at this point."

Changes the government plans to make along with the sale should lower the retail cost of alcohol in the province, Coleman said. "It actually should have a positive affect on the retail price in the long run."

B.C. now has 197 government liquor stores and 800 or 900 private stores that sell alcohol. The private stores buy their stock at 16 per cent lower than the government store price. "In actual fact the discount should actually be higher," said Coleman.

After the sale both kinds of store would pay the same wholesale price, he said. "I think you'd see some consumer benefit from that."

The NDP critic for the liquor distribution branch, Shane Simpson, asked about the sale and the Kinsella connection during question period in the legislature Feb. 22.

"I just think there always has to be a concern here," he told reporters in the hallway, "when somebody who is so very clearly so closely connected to this government, was a key advisor to the premier in her leadership race, and has a company that specializes in privatization and outsourcing, has clients who want this business, and out of the blue it appears now that opportunity is going to present itself."

He questioned whether the sale is a good deal for the public. "My concern is the minister doesn't appear to have a business plan for this," he said, noting it would give a company a monopoly. "Where's the long term advantage in this?"

NDP Leader Adrian Dix said the sale shows short term thinking by the government. "What they're doing of course is what they're doing across the board, selling assets of the province so the premier can pretend going into an election that the Liberal Party is fiscally prudent," he said.

If there's a good business case for the sale, the government should provide it, he said.

Assets can only be sold once, making it a dubious way to balance a budget, he said. "For all the talk about prudence, that is the opposite of what a prudent person would be doing," he said.

A BCGEU press release responding to the budget said it was "shocked" by the privatization announcement and called on the government to clarify its intentions.