British Columbia's Auditor General John Doyle released a report finding that the government has failed to plant enough trees to ensure a healthy forest industry in the future. 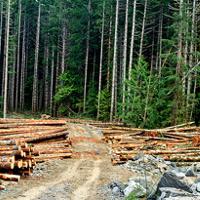 Worse, the government lacks reliable information on the state of the forest and has no plan for what to do about it, he said.

Various observers said Doyle's report confirmed what critics have said for years, but the minister responsible insisted the province has a plan and is doing the necessary inventory work.

"Significant areas of the forest are presently damaged by wildfire, diseases or pests such as mountain pine beetle, and the decision whether to replant lies with government," Doyle wrote. "Unlike industry, government is not legally obligated to reforest. As such, very limited replanting has occurred."

The government is responsible for 90 per cent of the 22 million hectares of forested land that are available for timber production and harvesting in the province, Doyle wrote.

The government's decisions today will have a big effect on the state of the province's forests in the future, he said. Presently it is not managing the forests in a way that would reverse the trend towards having less timber available for harvest and reduced species diversity in some areas, he said.

Doyle's six recommendations include developing a plan for forest stewardship and investing enough in silviculture to achieve long-term timber goals.

The provincial government reorganized how it manages forestry a decade ago with a system that reduced the involvement of public employees and gave companies more responsibility for developing and implementing plans.

"This was supposed to be a system based on results and the government clearly doesn't know in the way that it needs to what is going on in the forest," said NDP Leader Adrian Dix. "This leads to significant problems."

The industry has shed more than 30,000 jobs under the BC Liberals and the mismanagement will make it difficult to recover, he said. "It means the industry and the forest are worse off in the future."

Doyle's report shows the land base has been degraded and decisions are being made based on inaccurate data, said NDP forests critic Norm Macdonald. "It's in auditor's language, but you could not condemn more harshly the management of our public lands over the past 11 years."

The first thing to do is to get the inventory correct, he said. "They just do not know what's going on the land base, and yet all of the things they are doing are premised on that knowledge they just don't know."

The province has a "forest health crisis" and the government is not credible on the file, he said.

Working on it, says minister

Forests, Lands and Natural Resource Operations Minister Steve Thomson thanked the auditor general for his office's work, but stressed the ministry has management of the forests under control.

"He's identified recommendations our ministry is already working on," he said. "Many of the suggestions he's made suggested we don't have objectives we're working to. That's not correct."

The objectives set out in the guiding legislation are to have a healthy forest industry, he said.

There are a known 733,000 hectares of forest land that haven't been sufficiently reforested, and about 300,000 hectares of that is the government's responsibility, he said.

He acknowledged that number is likely to grow as the ministry has a closer look. "What we're saying is that we know that there are currently identified 733,000 hectares. Work continues to identify the additional land. There are estimates out there. That work is underway."

And when it's done, "The overall numbers will be larger than the currently identified land."

Retired forester Anthony Britneff has estimated there are 2 million hectares of land within the 22 million hectares of commercially viable forest land that have not been sufficiently replanted. The Forest Practices Board reportedly presented a preliminary estimate that was in line with that at the recent Western Silvicultural Contractors' Association meeting in Kamloops.

Britneff said the number goes up to 9 million hectares if you include all areas disturbed by fire and pests that are not stocked. "My estimate excludes provincial parks, reserves and federal and private lands," he said in a message to a forest issues email list. "It includes protected areas such as wildlife habitat areas, riparian areas and other environmentally sensitive areas."

The health of the larger not stocked area is "a simple indicator of sustainability for all the forestland for which the forests ministry is mandated by law to manage for soil, water, biodiversity and additional values other than just timber," he said.

The forest ministry has not yet provided its own estimate, he noted.

Two weeks ago The Tyee published an editorial by the NDP's Macdonald on these issues.

It drew a response from Al Gorley, the chair of the Forest Practices Board, which stressed that the debate about reforestation should be less about numbers and more about how the public wants Crown forests to be managed.

"Board staff are now in the process of considering what strategic issues may exist concerning the amount of [Not Satisfactorily Restocked] and what government is, or ought to be, doing in response," he wrote. "Once that analysis is done, the Board will be in a position to provide its findings and conclusions in a report that will be published for all to see."

Indpendent MLA Bob Simpson said the auditor general's report is a good place to begin the discussion on the future of forestry in the province. "I think it's a good report because I think it captures the essence of a lot of critique of the government that's been going on for a number of years," said Simpson, who represents Cariboo North. "I think they capture the guts of what needs to be done and what's not being done."

The lack of reliable data is a big problem for the ministry, especially as climate change affects the province's forests, he said. "The real lesson we take from the mountain pine beetle is a stand of timber is very susceptible to the vagaries of climate change and pests and disease."

Premier Christy Clark's jobs strategy has been based on non-renewable resources, Simpson said. It has focussed on things like natural gas and mining that will provide a short-term boom.

Forestry is at a low point now, but as a renewable resource it could provide jobs 25 years from now when the boom in other industries has passed, he said. The auditor general's report is a reminder that to make that happen the government needs to invest in the forests today, he said.