Three days before the Vancouver Canucks lost game seven of the Stanley Cup final (and thousands of drunks lost their tempers), the general manager of the Liquor Licensing and Control Board feared a riot would erupt in downtown Vancouver, according to email obtained via Freedom of Information. 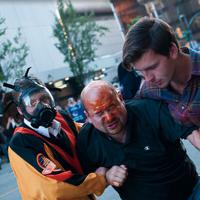 "The report from all call participants was of increasing crowds similar now in size to the Olympics, high levels of intoxication on the streets and difficulty in controlling the crowds and protecting public safety," Ayers wrote. "Prior to, during and immediately following (game five) there were huge numbers of people fueling and refueling at the (licensed retail stores), significant re-sale of liquor outside and adjacent to some LRS -- some to minors -- open consumption on the streets, fights and violence, people climbing up power poles and on top of bus shelters, etc.

"We are expecting record crowds (for game six on June 13) as this may be the deciding game, and given the escalating problems, intoxication, violence and pre-riotous behaviour, I have made a decision under the Liquor Licensing and Control Act to close all liquor stores in the downtown Vancouver core at 4 p.m. tomorrow evening."

The September 6 published VPD internal review claimed the force had no hint of a riot.

"Prior to game seven, there was no substantiated intelligence that a riot would occur," said the report. "No concerns were raised by planners, command staff, or other VPD officers that there would be a riot. Further, there were no public phone calls made to the VPD, no reports from school liaison or youth officers that kids were talking about a riot, no reports from outlying police jurisdictions, Transit Police, or other public safety partners that a riot was likely, and nothing credible appearing on social media sources of people organizing to riot."

"The less communicated publicly prior to tomorrow afternoon the better in terms of trying to prevent an increase in alcohol being brought into the downtown core because they are aware it isn't available at the stores," Ayers wrote.

Beer buyers found ways around the ban, either via off-sales at bars or at the government liquor store at 8th and Cambie. That location was not on the early closure list, but required help from eight police officers and two LCLB personnel to clear the store and lock-up before 6 p.m.

When the Canucks won a third time in game five on June 10, there were 2,000 liquor pour outs recorded by the Vancouver Police, 850 by the Transit Police, 120 violation tickets written and two dozen breach of peace and public drunkenness arrests.

"The sale of micky's out of (Jimmy's Cold Beer and Wine) is amazing," Lister wrote. "Several pourouts but we have seen lots of people go into the west lanes 800 Homer pouring their liquor into cups and in the latest we saw a guy that bought four micky's then got on his phone and met buyers in the lane in an underground parking lot."

Lister responded five minutes later: "There are so many people the police are totally overwhelmed… a couple of them (police) are a bit pissed off with us for not closing the LRS's early."