The chemicals used to extract shale gas continue to be a closely guarded corporate secret in British Columbia. But in Wyoming, disclosure of those chemicals is the rule. And that's a practice environmentalists want to import to this province. 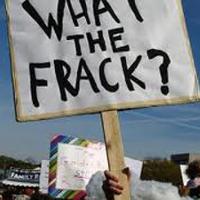 About Fracking Time for an Investigation

The chemicals -- which vary from company to company but are known in the United States to sometimes include carcinogens and explosives -- are mixed with sand and high-pressurized water and then injected into rock formations that contain shale gas.

That so-called fracking process causes the formations to crack open and stay open, allowing the gas to be extracted -- a business the British Columbia government has been promoting.

The province's oil and gas commission has the option of asking companies what chemicals they're pumping into the ground. But such disclosure is mandatory and made public in Wyoming, as a result of rule changes that were approved last June.

In an email interview with The Tyee, the head of Wyoming's oil and gas conservation commission Tom Doll explained the governor in office at the time wanted to toughen up the rules around shale gas development.

As a result, explained Doll, oil and gas companies must now "submit a plan detailing the chemical additives and receive approval prior to doing well stimulation" -- another term for fracking.

But, he said, "more importantly, post-stimulation, the operator must disclose what chemical compounds, types, and concentrations or rates were actually injected into the well."

For example, Encana Corp. -- which also operates shale gas wells in northeastern British Columbia -- has revealed the chemicals they're using at one Wyoming drilling site include: boric acid, an insecticide; tetetrakis (hydroxymethyl) phosphonium sulfate, another insecticide; and heavy aromatic naphtha, which is similar to gasoline.

However, the state's new regulations are far from perfect.

"The owner, operator or service company may request well data confidentiality," revealed Doll. "(They) may also provide a written request to hold 'trade secret' chemistry confidential. However, the rules still require disclosure of the chemistry to the Supervisor."

States such as Arkansas, Michigan and Pennsylvania have followed in Wyoming's footsteps, approving their own disclosure rules. Other jurisdictions have gone even further, including Quebec where fracking has been banned outright.

Cough up the chemicals: Parfitt

Here in British Columbia though, the oil and gas commission doesn't anticipate any improvements to our disclosure process, which was came into effect in October as part of the government's new Oil and Gas Activities Act.

And that's a concern for Ben Parfitt, a veteran journalist who now researches for the Canadian Centre for Policy Alternatives with a focus on fracking.

"From a public health and safety perspective as well as environmental protection perspective, it is inappropriate for the energy industry regulator to essentially be the gatekeeper of information pertaining to chemicals that could contaminate public water resources," says Parfitt.

"The provincial environment ministry and health ministry ought to be provided a list of all chemicals well before industry activities occur."

Doll says that full disclosure of fluid ingredients should always be required when it comes to fracking. For his own part, Parfitt believes British Columbia should look to Doll, and Wyoming, for guidance.

He says that transparency equals accountability, especially if a mistake, such as a fluid leak, is made. "Disclosure would also drive innovation, smoothing the way for substitution, so that the least toxic compounds are used."